Dhanvantari Trayodashi 2020: The Day Of Father And Teacher of Ayurveda And The Physician Of Gods

Dhanvantari Trayodashi 2020: The Day Of Father And Teacher of Ayurveda And The Physician Of Gods 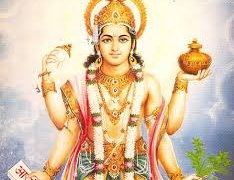 Dhanvantari Trayodashi is a day dedicated to Lord Dhanvantari and is celebrated as his birth anniversary. An incarnation of Lord Vishnu, he is the Father and Teacher of Ayurveda and the Physician of Gods.

According to a popular legend, as stated in Hindu Scriptures, Lord Dhanvantari emerged out of a Sea on this day, due to the churning of the milky ocean (Samudra Manthan). He carried a pot of Elixir or Amrit in his hands. As per the Hindu Texts, this incarnation of Vishnu has four hands with a pot of nectar, Conch Shell (Shankh), Herbs and Chakra in each hand. This is the reason, this day is also celebrated as the birth anniversary of Dhanvantari and is also known as Dhanvantari Jayanti. It is believed that he descended on this earth to protect the living beings from diseases, sorrows and provide them with a long and healthy life.

Lord Dhanvantari is worshipped by Ayurveda Practitioners all across India as well as by other people for a healthy physique and a long life.

This day is also observed as Dhanteras or Dhantrayodashi. People perform Lakshmi Puja and pray for wealth and prosperity. The tradition on this day is to bring Goddess Lakshmi home which is done through the purchase of gold, silver and other jewels as well as utensils. Devotees clean their homes and offices in order to welcome Lakshmi, the Goddess of wealth. Kuber Puja is also performed on this day.

Dhanteras, also known as Dhantrayodashi, will mark the beginning of the festival of Diwali. Just a few days are pending for the festival to commence.

The festival is celebrated along with Trayodashi Tithi (Thirteenth tithi), Krishna Paksha (waning phase of the Moon) of Kartik Maas.

Lord Kubera, Lord Dhanvantari, Yamraj and Goddess Lakshmi are worshipped by devotees on the day.

It is believed that Lord Dhanvantari (the God of medicines) and Devi Lakshmi (Goddess of wealth) emerged from the ocean bed during Satyug on the day.

Lord Dhanvantari, is believed to be an avatar of Lord Vishnu, held the kalash containing Amrit (immortality).

The puja is usually performed after sunset. The Pradosh Kaal Muhurat is especially considered holy for Dhanteras Puja. The muhurat for that is 5.28 pm to 8.07 pm on November 13.

The Vrishabha Kaal, however, is ideal for Dhanteras Puja rituals. It begins at 5.32 pm and ends at 7.28 pm on November 13.

Dhanteras 2020 Date and Time: Dhanteras is popularly known as 'Dhanatrayodashi' and is observed just a day before the auspicious festival of Diwali.

Celebrated in the Hindu month of Kartik, Dhanteras is a festival that marks the beginning of Diwali. Also known as 'Dhanatrayodashi' or 'Dhanvantari Trayodashi', Dhanteras will be celebrated on November 13 this year.

This festival has special significance to Lakshmi, Lord Kuber, Lord Yama and Lord Dhanvantari and it believed that worshipping them would help devotees increase their wealth prosperity. Interestingly, the Ministry of AYUSH observes Dhanteras as the "National Ayurveda Day". It was first observed on October 28, 2016.

According to the panchang of Krishna Paksha Muhurat of Kartik Mass, Dhanteras Puja will be observed on November 13 i.e, Friday. The auspicious time for Dhanteras Puja would be between 05:28 pm and 05:59 pm. It is believed that on this day Goddess Lakshmi arrives with the God of wealth-- Lord Kuber. So, you can also perform Kuber Pujan and Lakshami Pujan on Dhantryodashi. Lakshmi Puja should be done in Pradosh Kaal between 05:28 pm and 08:07 pm after sunset.

Why utensils, gold and new clothes are bought on Dhanteras