Germany's Shocking Loss In Spain By 0-6

Germany's Shocking Loss In Spain By 0-6 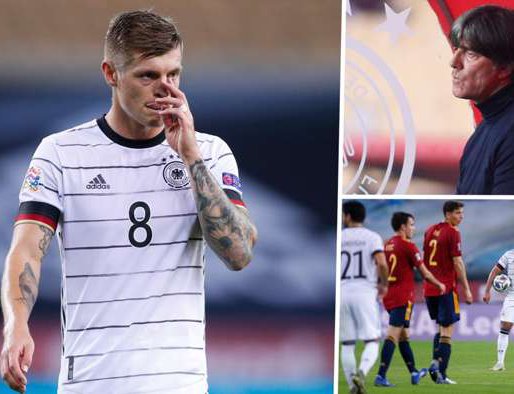 Joachim Low's side suffered a humiliating 6-0 loss in Spain on Tuesday night, underlining just how far they have fallen over the past few years

There was some surprise when it emerged that more people in Germany watched an antiques show last Wednesday night than the nation's friendly against Czech Republic.Goal

Perhaps they knew what they were doing, though. There was certainly nothing of value to be found in Germany's performance against Spain on Tuesday – just pure rubbish.

Joachim Low's side were outclassed from the first whistle and could have no complaints after an embarrassing 6-0 loss in Seville, as Serge Gnabry admitted afterwards.

"Nothing worked for us tonight," the Bayern Munich winger told UEFA's official website. "We could not get a grip on them. They deservedly won by such a margin. We now know where we are at."

Which is at a historically low ebb. This was Germany's heaviest every defeat in a competitive fixture.

In addition, they were three down at the break – not since 2006, against Italy, had they suffered such a humiliating start – and the incredible thing was, the scoreline arguably flattered the visitors.

They offered absolutely nothing going forward, with Toni Kroos admitting, "Spain showed us how to attack." He wasn't exaggerating either.

Germany managed just two shots all game, and none on target. And that's despite Germany fielding a forward line containing not only Gnabry but also Leroy Sane and Timo Werner.

With Matthias Ginter and Phillip Max repeatedly caught out of position by hat-trick hero Ferran Torres and Dani Olmo, and Robin Koch and Niklas Sule failing dismally to contain Alvaro Morata, Spain looked like scoring every single time they attacked.

The gulf in class was both shocking and embarrassing. Germany, remember, had gone into this game top of their Nations League group, needing only a point to progress to next year’s finals.

However, there is no denying that this is a side in decline. They’ve been struggling since the 2018 World Cup, when they crashed out in almost farcical circumstances in the group stage.

Low recognised that, of course, infamously deciding to end the international careers of Thomas Muller, Mats Hummels and Jerome Boateng.

Expect to hear the names of all three players mentioned repeatedly in the coming days, as Low's critics argue that maybe the problem in Russia two years ago wasn't the players – but the coach.

It was certainly hard not to look a team full of world-class players being toyed with on Tuesday night and wonder if Low has lost his way.

This was Germany’s first defeat since September of last year but it had been coming. The quality of the performances have been steadily declining, in spite of the emergence of some exciting young talent.

Ominously, they had arrived in Seville having kept just once clean sheet since last November. That porous defence was ruthlessly exposed by Spain’s electric front three.

Low, of course, has achieved great things with the national team but even the greatest coaches can outstay their welcome and it is now six years since Germany conquered the world.

Hungarian legend Bela Guttmann used to say that the third year is always fatal for a manager; that a certain fatigue and staleness is inevitable after such a sustained spell working with the same personnel. The players can simply tire of the coach and his methods.

International football is obviously different to the club game but Low has been in charge for 14 years now, and involved for 16.

Maybe it's time for a change; time for something new.

Indeed, even an avid viewer of Bares für Rares ('Cash for rarities') would have struggled to see anything worth holding on to in Seville on Tuesday night