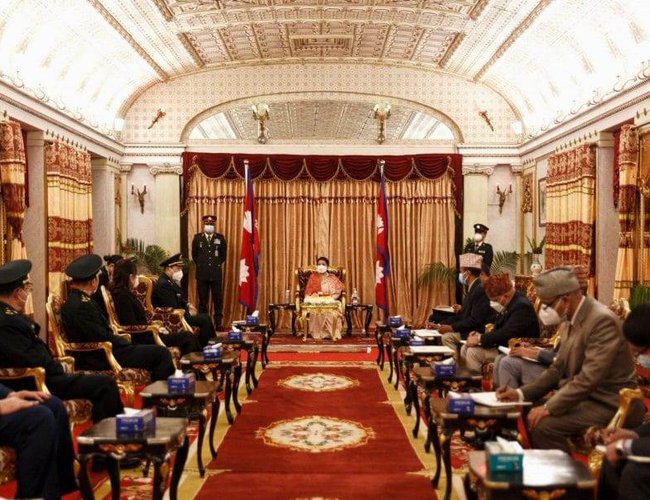 When Wei met President Bidya Devi Bhandari and Prime Minister and Minister for Defense KP Sharma Oli, they discussed economic cooperation amid the framework of the China-proposed Belt and Road Initiative and military exchanges.Global Times

The visit amid the ongoing pandemic offers an opportunity for the two countries to communicate face to face and signifies the friendly ties between the two neighbors, which will boost mutual trust between the two countries and the two militaries, Qian Feng, director of the research department at the National Strategy Institute at Tsinghua University, told the Global Times on Sunday.

Nepal is still fighting the coronavirus and the Chinese military had offered help. In May, the People's Liberation Army (PLA) Air Force sent protective outfits, medical masks and thermometers to the Nepalese military.

India was closely watching Wei's visit as it always does on China-Nepal interactions. Wei's visit came at a time when India and China are in the midst of a border standoff, with Indian media reporting the visit as China drawing Nepal to its side.

Indian media The Print called Wei's visit as yet another attempt by China to lure Nepal away from India.

But the interaction between the Chinese and Nepalese militaries has been a tradition. Wei received General Thapa in Beijing in June 2019. Nepal's Deputy Prime Minister and Defense Minister Ishwar Pokhrel attended the Xiangshan Forum in Beijing in October 2019, during which the two defense ministers signed a 150 million yuan ($22.8 million) deal on Chinese military assistance. The two militaries have held joint special forces drills for three consecutive years.

India is groundlessly accusing China of inflaming the border issue and stoking anti-India sentiment in Nepal when India itself has territorial disputes with Nepal in Kalapani, Lipu Lekh and Limpiyadhura. Nepal has called to settle the border issues via diplomatic channels based on history and evidence.

China is also concerned about the rift within Nepal's ruling party and its attitude toward the strategic alliance between India and the US.

Qian noted it is not surprising that India wants to make a fuss over the border issue.

"Wei's visit to Nepal will reiterate the support for Nepal's national interests and territorial sovereignty. China and Nepal are strategic partners," Qian said, "As a major country and neighbor, China is bound to give Nepal moral and diplomatic support."

Wei's visit is also a warning for anti-China hardliners in India who do not reflect on themselves but seek to sow discord between China and Nepal and provoke trouble, Qian said.