NCP leader K.P. Sharma Oli is not the first prime minister to dissolve the parliament calling mid-term elections to reply constitutionally to frequent interventions by Party President over the popular authority of the elected executive in exercising the power. Starting just after the political change in 1951, between Matrika Prasad Koirala and B.P Koirala, two revolutionaries and brothers, the question over who controls the government: Party President or Prime Minister has remained a major cause for creating political turmoil of one kind or another and bringing prolonged political instability. The seven-decade-old unsettled dispute remains at the crux of the political instability in the country 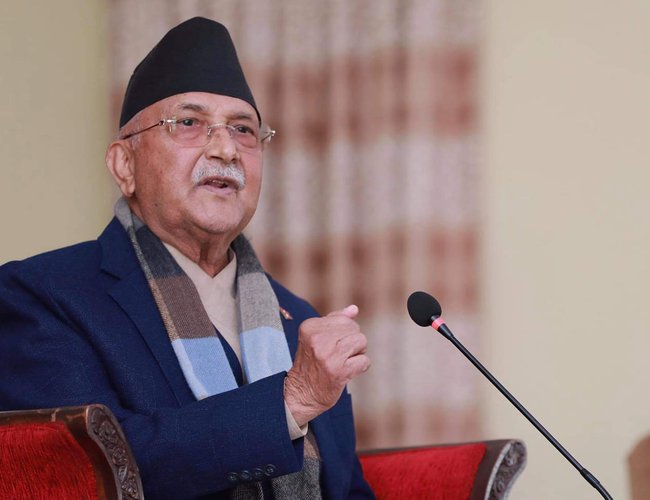 Had not NCP co-chair Pushpa Kamal Dahal Prachanda and other senior leaders Madhav Kumar Nepal and Jhalnath Khanal frequently intervened to limit the power of the executive, popularly elected prime minister K.P. Sharma Oli would not have recommended the dissolution of the House of Representatives and fresh elections.

In an effort to defend his move to dissolve the House of Representatives, PM Oli said that the step is actually an outcome of response against the selfishness of some power-hungry leaders within his party.

“It was neither my wish nor my personal whim. It was my compulsion to dissolve the house seeking a fresh mandate to govern the country,” said Prime Minister K.P. Sharma Oli in his message to the nation.” Intervening all the times in state affairs including appointments and policy matters, the Party co-chair and other leaders crossed their limit threatening me to expel from the party. Elected by the people, I have decided to go to people seeking justice rather than to surrender the people’s power,” said Oli in his address to the nation.

PM Oli is not the first dissolving the parliament seeking a fresh mandate and punishing those who tried to control the executive nor he will be the last to do so as long as the party and party president tried to curtail Prime Minister’s authority.

Following the dissolution of the HoR, the politics of Nepal is now polarized establishing PM Oli as the sole leader on one side and the rest including Nepali Congress and factions of NCP on the other.

Despite vehement efforts to lure more MPs from PM Oli’s camp, Prachanda, Madhav Kumar Nepal and Jhalnath Khanal were unable to do so. More than 50 percent of MPs are still with Oli. 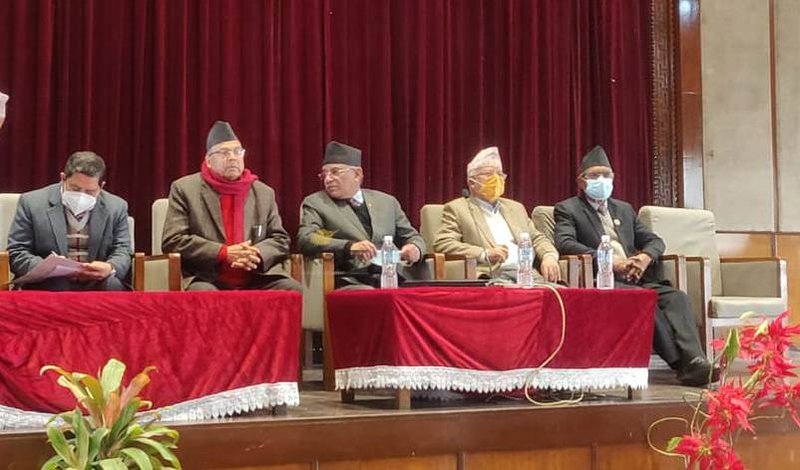 With formidable support among the overwhelming majority of former CPN-UML and a few from Maoists, PM Oli too controlled over 50 percent of members of the central committee, standing committee and parliamentary party.

With no direct authority to control the executive, the party chair used these committees to intervene in the nitty-gritty of appointments. As prime minister Oli has been unable to move and decide on his own due to the unconstitutional influence of the party president and party leaders, he has been in a power struggle in his party confronting the leadership. 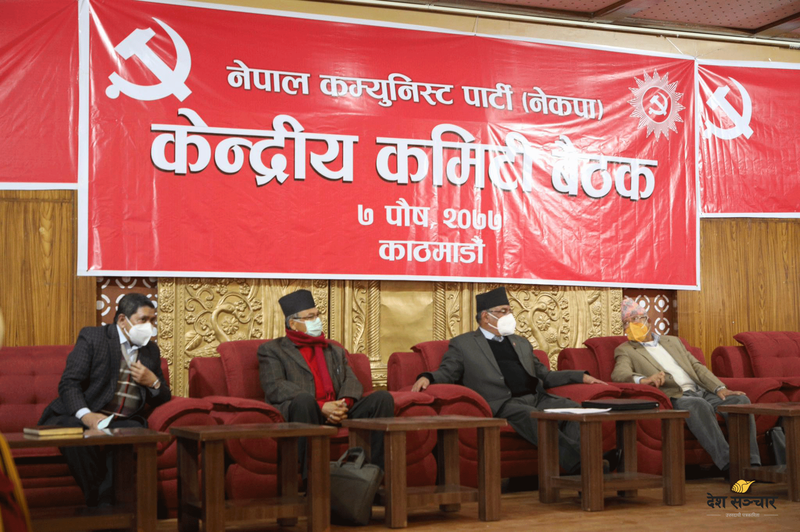 With the backing from party co-chair Pushpa Kama Dahal Prachanda, even chief whip Deb Gurung has started to defy the order of the leader of parliamentary party Oli.

Promulgated in haste and drafted by politicians with diverse interests, the constitution is a document of contradictions and political document rather than based on fundamental of constitutionalism.

Surya Thapa, the press advisor to the Prime Minister, said that scrums and gatherings held against the party's statute and rules could not remove the PM. "In the meeting, PM Oli said that these gatherings were just an ugly joke to make the world laugh," added Thapa.

Remembering an incident of 2028 BS when some people had expelled him from their group during the Jhapa movement, PM Oli said, "Again, coincidently Pushpa Kamal Dahal 'Prachanda''s group has been declaring to remove me from NCP. This is nothing but a political drama before the whole world."

Prime Minister Oli also has made an effort to compromise visiting Prachanda and Bam Dev Gautam’s residence on 19 December. However, Prachanda and the groups did not show any sign to budge. As he was helpless and had limited time to prevent major political actions against him, the prime minister called the emergency meeting of the Council of Ministers had recommended to the President to dissolve the parliament.

Following the government’s decision, parties in opposition, as well as the dissenting side within the ruling party, have been engaging in many political and legal discussions to consider the steps ahead.

Since the political changes of 1951, several political crises occurred due to the dispute between Party President and Prime Minister over-controlling and exercising executive power.

Started in 1952 between Nepali Congress leaders BP Koirala and Matrika Prasad Koirala, two brothers and leaders of the revolution, the dispute between party president and prime minister over controlling power has spilled political parties several times. Those who lead the party hold the view that the prime minister should abide by party directions and decisions while taking executive decisions. 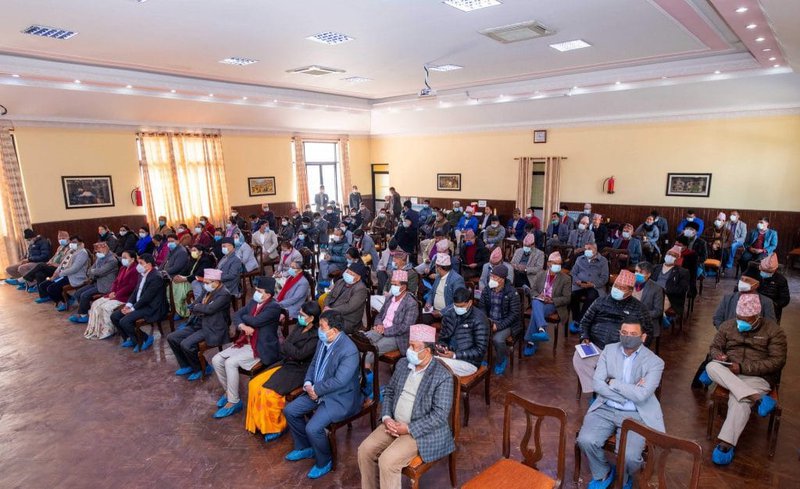 When Koirala expelled Prime Minister Deuba, he split the party and registered Nepali Congress Democratic. Knowing the political consequences, later Koirala continued to lead the party and parliamentary committee. He became prime minister in 2006 through the revived House of Representatives but he held both positions. Sushil Koirala followed senior Koirala.

Although K.P. Sharma Oli also held party president and parliamentary leader positions in the first elections, he shared party presidentship with Maoist leader Prachanda following the merger between the two parties in 2017.

Prachanda, as a party chairman, started to pressure the prime minister in power-sharing. Taking support from Madhav Kumar Nepal and Jhalnath Khanal, former colleagues of Oli, Prachanda moved to contain the powers of PM.

In a dramatic turn of events, PM Oli, who has been mired in an intra-party feud with the rival faction of the ruling Nepal Communist Party (NCP), recommended the dissolution of the House of Representatives. With no authority in hand, President Bidhya Devi Bhandari approved it within hours announcing that the general election will be held on April 30 and May 10.

A press release issued by the President’s Office stated that the decision to dissolve the House was taken by the Council of Ministers in accordance with Article 76 (1) (7) and Article 85 of the constitution.

The PM’s move comes in the backdrop of the rival faction of the NCP pressuring him to step down either as PM or party co-chair. The PM had fallen into the minority in all the key bodies of the party — the Secretariat, the Standing Committee and the Central Committee — and his opponents were threatening to take action against him on the basis of majority.

A few days ago, 83 NCP lawmakers had signed a petition seeking a special session of Parliament, indicating that the PM might not hold the majority in the party’s parliamentary party, which has 173 members.

The Prime Minister further alleged that attempts were made time and again to making the national politics anomalous and unstable after the election itself. “Some leaders were constantly making efforts to head towards instability even though the government had started working as per public’s aspirations,” Oli said.

He also claimed that some leaders in the party were entirely focused on occupying the post rather than working to deliver as per the people’s mandate.

Oli also accused the ‘other faction’ of plotting against him, time and again, which ultimately compelled him to take the decision which he says was not what he intended to do in the first place.

Constitutional expert Dinesh Tripathy said that the PM’s move was unconstitutional and the president should not have endorsed it. “The present constitution does not have a provision that allows a majority government to dissolve the House”

Constitutional expert Bhimarjun Acharya claimed that the PM’s action is unconstitutional. “ The constitution does not have any provision that allows the prime minister to dissolve the house,” said Acharya.

Former President of Nepal Bar Association Shambhu Thapa said the government could recommend the dissolution of HoR only if it didn’t have the numbers. Actions of the PM and the president have no constitutional validity, as Oli was heading a majority government, he added.

Nepali Congress lawmaker Radhe Shyam Adhikari, who is also a senior advocate, said if all the parties agreed to go to the polls, HoR polls could take place, but if they decided to challenge the move in the court and protests broke out on the streets, the constitutional bench would have to test the constitutionality of the PM’s recommendation.

The House of Representatives can be dissolved under Article 76 (1) (7) of the constitution.

It clearly states that the House can only be dissolved when no party has a clear majority and the leader chosen as prime minister by coalition partners fails to prove the majority within 30 days of his/her appointment.

Opponents of prime minister led by NC leader Sher Bahadur Deuba, ruling Party NCP leader Pushpa Kamal Dahal, Madhav Kumar Nepal have decided to move a petition to the Supreme Court challenging dissolution of parliament and the calling of an election terming the move as unconstitutional. Out of 275 members of House, 138 have reportedly signed the petition.

Earlier, lawyers have already filed 12 petitions challenging the dissolution including one by senior advocate Dinesh Tripathy. According to the constitution, five members of Constitutional Bench of the Supreme Court will start the hearing.

Supreme Court Spokesman Bhadrakali Pokharel said 12 petitions against the dissolution were “in the process of being registered”.

“Under the constitution, the prime minister has no prerogative to dissolve parliament,” lawyer Dinesh Tripathi, who is one of the petitioners, told Reuters.

“It’s a constitutional coup. I’m seeking a stay order from the court,” Tripathy said, adding that under the constitution, the prime minister should allow the formation of an alternate government to ensure stability in a country that has seen 26 prime ministers in 30 years.

If the court registers the petitions, it could take about two weeks for a decision, legal experts say.

Under the leadership of Sher Bahadur Deuba, Nepali Congress has shown a major contradiction in joining a political front against PM Oli to make Prachanda the next prime minister in case of revival of HoR.

Interestingly, the Nepali Congress which launched a nationwide protest against the rule of authoritarian communists is now following another leader of the same party which was in power till a few days ago.

Although this is a good opportunity for Nepali Congress to correct its posture of ideologically communist leaning to the centrist liberal democratic party contesting elections to defeat divided communists, NC leadership chose to back one communist against the other as a junior partner. 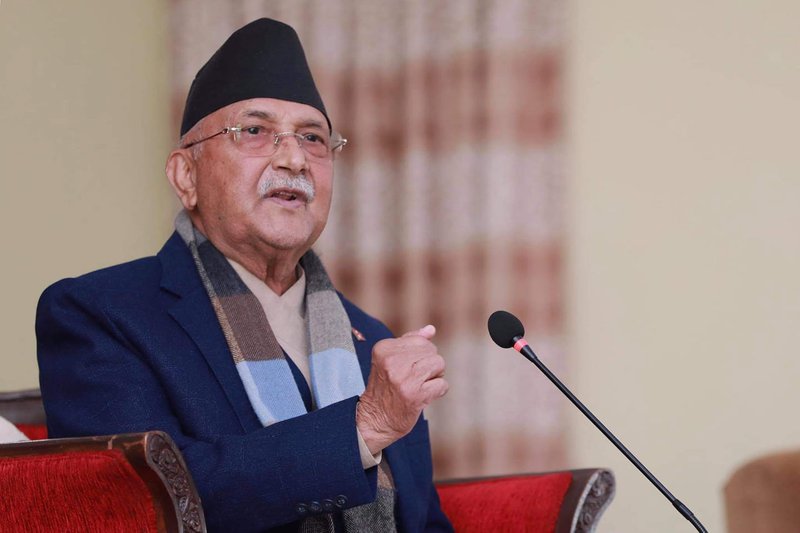 This is the same as rightist RPP. Instead of taking political mileage out of current polarization, RPP leaders also decided to back one communist faction and against the other.

Whether there will be elections or revival, Nepali Congress will be a major loser in the politics of Nepal.

From autocratic Rana Regime, Constitutional monarchy, party less panchayat with unitary forms of government to present secular, federal republic, Nepal has experimented with several forms of governments. Despite seeing a government-appointed by King to a government with a thumping majority in the parliament and two-thirds majority government, Nepal is yet seen any political stability.

With growing regional tensions, China and India, which jostle for influence in Nepal, have not publicly commented on the upheaval. However, they have a natural concern over Nepal’s instability.

The seven decades of unsettled dispute between the party president and prime minister over controlling the power continues to cause political instability in the country.

Until Nepal clearly sets precedence on party president and prime minister, nothing can prevent the power clashes in the country resulting in political instability.

POLITICS Consensus To Contentions By A Correspondent 1 day, 20 hours ago