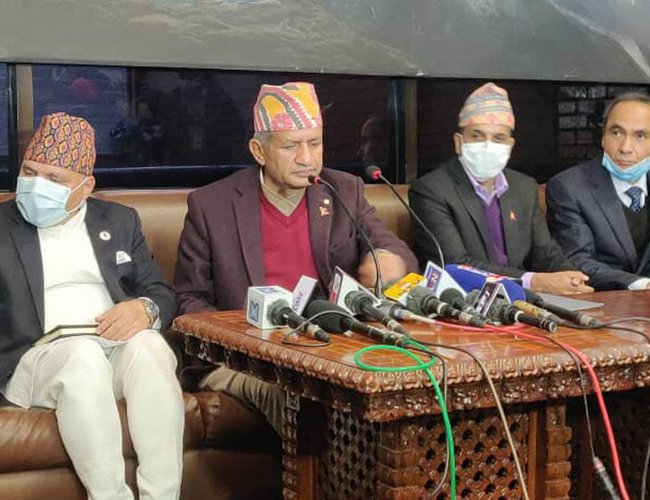 Minister for Foreign Affairs Pradeep Kumar Gyawali has said that both countries have agreed to accord high priority to the Construction of proposed 400 kV New Butwal-Gorakhpur high voltage transmission line as well as other cross-border transmission lines.

In his visit to India has further consolidated the intimate and multidimensional relations between two inextricably linked neighbours -- Nepal and India.

He said that both countries held in-depth discussions on the review of 1950 Peace and Friendship Treaty, report of the Eminent Persons Group (EPG) and sorting out the border disputes.

Talking to journalists upon his arrival at the Tribhuvan International Airport on Saturday afternoon, he said five areas of cooperation were primarily discussed during the meeting of the Nepal-India Joint Commission, held on Friday.

“Meeting of the Nepal-India Joint Commission has reviewed issues like political, security and border; connectivity/infrastructure and economic cooperation; trade and transit; energy and water resources; tourism and education and agreed to promote bilateral cooperation in these areas,” he added.

According to him, India has assured Nepal that it would give Nepal high priority for supplying COVID-19 vaccines.

Likewise, discussions were held on opening the aviation and land routes that were closed due to the pandemic, expediting the process of handing over 11 sections of the Postal Highway and completing its remaining three sections, in addition to expanding the railway line from Kurtha to Bardibas. Currently, the railway line connects only two places -- Jaynagar (India) and Kurtha (Nepal).

“We also talked about initiating the construction of Integrated Check Post at Bhairahawa border, connecting four-lane road, being constructed near Mahakali River, with Indian national highways, and construction of cross-border economic zones,” said Gyawali, adding, “agreement has been reached to prepare the Detailed Project Report (DPR) of the Pancheshwar Multipurpose Project, while discussions were also held about constructing three motorable bridges on Mahakali River at Sirsa, Jhulaghat and Darchula”

The two sides reached an agreement to review both Transit and Railway and Trade Treaties, he added.

Nepal Army Collects Over 30,000 KG Of Wastes From Major Mountains By Agencies 17 hours, 31 minutes ago