India will celebrate its 72nd Republic Day also known as 'Gantra Divas', Republic Days honors the date on which the Indian constitution came into effect on January 26, 1950 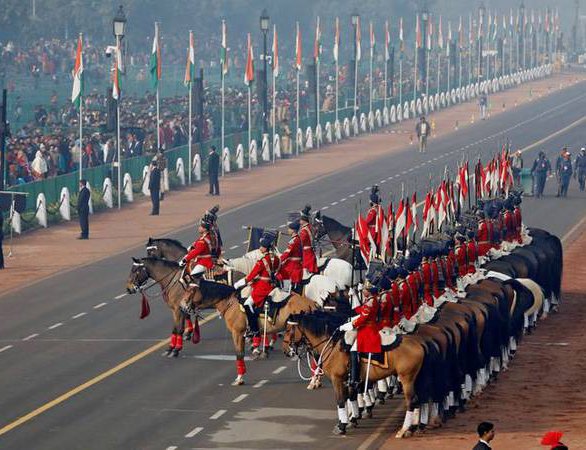 Today is a special day in India -- it's the 72nd Republic day of India. Nepal’s southern neighbor India is celebrating after gaining independence from British rule and adopting a republic Constitution. Republic Day is the name of a holiday in several countries to commemorate the day when they became republics.

India will celebrate its 72nd Republic Day also known as 'Gantra Divas', Republic Days honors the date on which the Indian constitution came into effect on January 26, 1950.On Republic Day, a grand parade is organized at the Rajpath in New Delhi to showcase the country's defense capabilities, diversity and rich cultural heritage. The parade will reportedly begin from Vijay Chowk and end at National Stadium, covering a distance of just 3.3 kms instead of 8.2 kms.

For a first in 55 years, India will not have a foreign dignity as a chief guest at the Republic Day parade. British Prime Minister Boris Johnson had earlier accepted the invitation for the parade but cancelled his visit amid fears over the new strain of COVID-19 infection.

"Due to the global COVID-19 situation, it has been seen that this year there will not be any foreign head of state or government as the chief guest for India’s Republic Day event.Tolerance and perseverance from both the countries are essential. Nepal and India enjoy very close, friendly relations, on account of geographical proximity and close cultural and economic bonds.

Nepal is in a very important time in the anal of its history. The political developments that are taking place now will have far-reaching consequences. Nepalese are confident that peace, stability and economic development will be achieved through the new Constitution and adopting subsequent economic ethos in days to come. Apart from ethnic, cultural and religious ties, both countries share similarities of approach on many outstanding international problems. SAARC, BIMSTEC, BBIN, UN have added some more areas for the two countries to work together in achieving the goal of collective self-reliance within the region. Both Nepal and India are the members of major international organizations and share common perceptions and concerns on most international issues. The past President of India and the Indian Prime Minister’s visit three times to Nepal few years back should be viewed as a gesture of goodwill, harmony and better economic co-operation.

Nepal and India have been co-operating in national development of both countries in wide ranging fields including harnessing of water resources, trade and transit arrangements, health, infrastructure, education and training. This partnership has contributed to the welfare of the people in both countries and taken the relations to a higher plane and changes in Governments of both the countries have not made any difference to the depth of friendship which both cherish. New areas of cooperation are being added constantly maintaining the dynamism of friendship and mutual trust.

In 2014, when Narendra Modi came to power, he made it clear to his Bharatiya Janata Party and to the country that foreign policy will reign supreme under his tenure even as he invited SAARC leaders to his swearing-in ceremony in May that year, which included Nepal’s then-Prime Minister Sushil Koirala.

Subsequently, Modi visited Nepal in August 2014 and lapped up heaps of accolades for embarking on a bilateral trip to the neighboring country — the first by an Indian prime minister in 17 years, after I.K. Gujral’s visit in June 1997. Indian PMs who visited Nepal during this period went only to attend regional and or the multilateral meetings. During that time, both sides also lauded the formation of the Boundary Working Group (BWG), which was entrusted with the mandate of “construction, restoration and repair of boundary pillars”. Nepaland India directed their respective foreign secretaries “to work on the outstanding boundary issues, including Kalapani and Susta”, while New Delhi urged Kathmandu to sign the “agreed and initialled strip maps of about 98 per cent of the boundary.”

Since Prime Minister KP Sharma Oli dissolved the House of Representatives and announced the fresh date for election, Nepali Foreign Minister Gyawali had visited New Delhi. As such, the Nepal-India Joint Commission is the highest-level mechanism between the two countries to discuss the entire gamut of bilateral relations. The visit also reflected that Nepal-India relations move forward in any difficult circumstances. The joint commission meeting is meant to review the progress made in ties with a focus on economic partnership, trade and transit connectivity, power and water resources.

Nepal needs to broadly utilize the economic and trade opportunities available in India, but it has not been able to do so due to problems like: weak productive capacity, inadequate infrastructure, low foreign direct investment, Lack of effective institutional mechanisms to address the imminent issues. Inefficient trade facilitation infrastructure including complex rules and regulations, Lack of coordination among trade and transport agencies, non-harmonized reporting of trade data. Absence of an accreditation board, and low margins of preference, IGC and IGSC more formal than business like The Small Scale Industries (SSI ) products are facing difficulties in export on account of complexities in the rules of origin criteria; Definition of SSI products to be made compatible with the provisions of Industrial Policy-2010.

Business of India has grown significantly. In the last couple of years. The benefits should also be taken equally from Nepal as well. But how? Let us discuss on the modalities. Capacity development programme to be launched to the relevant stakeholders associated with trade logistics. Management of Infrastructure like ICDs/ICPs under Nepalese private sector. Incorporate shipping in treaty of trade and transit. Nepal should optimally use the Vishakhapatnam port and ask for the Dharma port for future transit transport.

A committee comprising of the Nepali private sector business community and the Indian business community be formed to recommend to the government on the policy, trade, transit and daily operation issues. In the past such forum recommendations were well taken by both the Government.

For food items the lab test facilities have to be developed in both sides. For the import of Indian vegetables and fruits to Nepal, Indian government help and co-operation is sought in the infrastructure with latest technology. Similarly, Nepali ginger, tea, large cardamom, MNC like Dabur, Uniliver products should have easy access to India having the lab test and the excellent quarantine office.

Unauthorized trade between Nepal and India has also a negative impact to both the countries so the formal trade should be encouraged for the mutual benefit of both the countries. On the FDI aspect, when we talk about Indian investment in Nepal, we should not only see what we have achieved, we should also focus more on the prospects and opportunities that lie ahead. If projects such as the Pancheswor, Arun III, Upper Karnali and Koshi hi-dam are completed, Nepal will be self-reliant on energy and irrigation. In a recent write up Low Politics In The High Himalayas by the former additional Secreatry of Indian government Mr. . S. Ramesh has said, “It might be smart for India to revisit its earlier doctrine of constitutional monarchy and multi-party democracy and support the restoration of the 1990 Constitution”. He futher writes,” India has taken the line that these political manoeuvrings are an internal matter for Nepal. But there’s no doubt it is monitoring developments closely. India has not really been able to reap the dividends, either politically or economically, of giving its blessings to the Nepali Congress-CPN (Maoist) deal signed in New Delhi in November 2005 which provided the basis for the April 2006 movement, which led to King Gyanendra’s removal. This deal, which brought the Maoists into mainstream politics and subsequently to power, happened primarily because the late Girija Prasad Koirala (GPK) convinced India, that the king, by his coup of February 1, 2005, had violated his commitment to constitutional monarchy and multi-party democracy.”

Even small families develop misunderstandings so it is but natural to expect that apprehension will definitely occur when the relations between two countries are concerned. Therefore the important issue is not whether disputes arise or not; the important issue is how swiftly and effectively these issues and irritants are addressed.