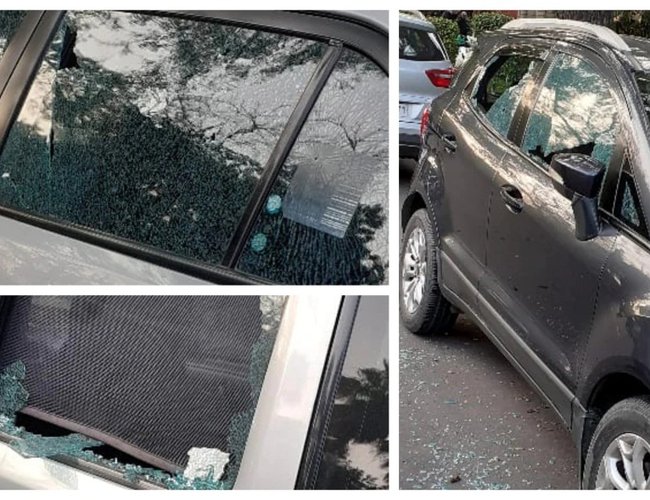 A very low-intensity blast occurred near the Israeli embassy in New Delhi, No injuries have been reported so far. Delhi Police said the blast appears to be a "mischievous attempt to create a sensation".

Aminor IED blast of "very low intensity" took place near the Israel embassy in New Delhi on Friday evening. No one was injured in it but some vehicles were damaged. The Delhi Police said the blast occurred at 5.05 pm at a spot about 150 metres away from the Israeli embassy report India Today.

Teams of the National Investigation Agency (NIA), the Delhi Police Special Branch, the Anti-Terror Squad, among others, were rushed to the spot to investigate the matter.

Sources have told India Today TV that the police have recovered an envelope -- which says "To Israel Embassy Ambassador" --near the blast spot. The envelope has been seized for analysis.

According to India Today, soon after the blast, the entire area around the Israeli embassy was cordoned-off with heavy deployment of police and central paramilitary forces.

Meanwhile, taking note of the blast near the Israeli embassy in Delhi, the Central Industrial Security Force (CISF), which guards vital installations in the nuclear and aerospace domain, civil airports and central government buildings, put on alert all its units across the country.

The force has asked its personnel to enhance vigil and maintain a "high level of alert".

India Today said alert has also been sounded in four districts of Uttarakahnd --Haridwar, Uddhan Singh Nagar, Dehradun and Nainital --after the blast in Delhi. As per SSP Haridwar, the police force has been alerted as the blast in Delhi took place just ahead of Mahakumbh, which will be held in Haridwar soon.

In neighbouring Uttar Pradesh, the administration has issued alerts in major cities, including Ayodhya, following the blast. Chief Minister Yogi Adityanath has asked district police chiefs to be extra vigilant.

Maharashtra Deputy Chief Minister Ajit Pawar said he has spoken to the state home minister and Directorate General of Police and has given directions of tighten security in Mumbai and Pune.

As a precautionary measure, authorities beefed up security at the Israeli consulate in Mumbai. Speaking to India Today TV, police officials in Mumbai said a team from Colaba police station has visited the Chabad House and additional deployment of cops is being made.

How has Israel reacted?

Speaking to India Today TV the Israeli Ambassador to India confirmed that "the mission is on high alert and everyone is fine inside".

This blast at the Israel embassy in New Delhi comes on a day when India and Israel celebrate 29 years of India-Israel diplomatic relations.

Reacting to the news of blast in New Delhi, Israeli Prime Minister Benjamin Netanyahu expressed "full confidence" in the Indian authorities in ensuring the safety of Israelis and Jews in India.

India's National Security adviser (NSA) Ajit Doval spoke to his Israeli counterpart Meir Ben-Shabbat and updated him on the situation and ongoing investigation into the bombing near the Israeli embassy.

In return, Netanyahu asked to convey to India that Israel has "full confidence that the Indian authorities will do a thorough investigation of the incident and ensure the safety of Israelis and Jews who are there", officials said.

Meanwhile, quoting an unnamed Israeli officials, Reuters reported that Israel is treating the blast near its embassy in New Delhi as a "terrorist incident".

External Affairs Minister S Jaishankar also spoke to his Israeli counterpart Gabi Ashkenazi and assured him of "fullest protection" to diplomats and the mission.

"Spoke just now to Israeli FM Gabi Ashkenazi about the explosion outside the Israeli Embassy. We take this very seriously. Assured him of the fullest protection for the Embassy and Israeli diplomats. Matter is under investigation and no effort will be spared to find the culprits," he tweeted.Live TV