Between Melamchi Blues And Euphoria: A Personal Reflection

Despite seeing three kings, three political systems, many prime ministers, ministers, engineers, consultants and contractors as well as a major insurgency, Melamchi forces us to ask the same question. 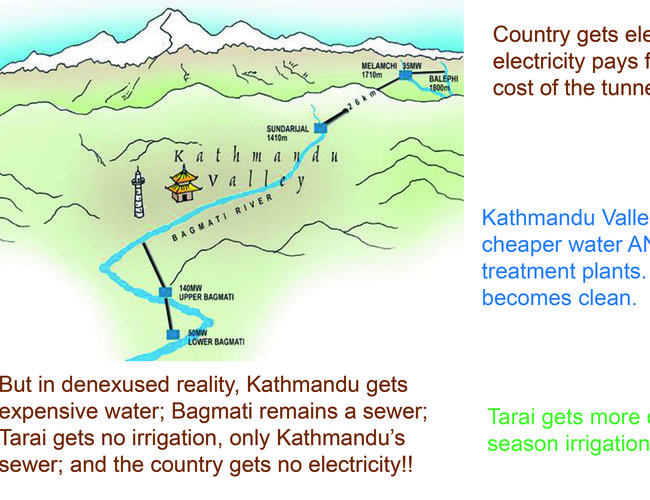 Hindu epics describe how it took godly thousand-year penances of three generations of kings – from Anshuman to Dilip to finally Bhagirath – to bring Ganga, trapped in the matted locks of Shiva, down to earth. The Sanskrit equivalent of the expression 'Herculean efforts' is Bhagirath prayatna. In a way, that has been the story of modern Nepal's effort to bring the waters of Melamchi to Kathmandu Valley.

When visiting the Swiss capital Bern, a village really with a population of less than 5% of Kathmandu, I was struck by the grandeur of its massive Cathedral which took almost 400 years to complete. After a major earthquake destroyed the original church, and despite suffering from the Plague as well as major religious schisms between Catholicism and Zwingli Protestantism, this small cantonment toiled generations after generations for four centuries to complete the endeavour. What binding motivation could inspire them to labour so long for such higher ends?

Despite seeing three kings, three political systems, many prime ministers, ministers, engineers, consultants and contractors as well as a major insurgency, Melamchi forces us to ask the same question. What ethos of Nepalipan inspired this multi-generational effort? Is it the deeply held Dharmic injunction, so aptly expressed by our national poet Bhanu Bhakta, of this being a meritorious act beyond one's narrow economic self-interest? I mull over this question of development philosophy by reflecting on my 40-year encounter with Melamchi, starting as a junior engineer in the Ministry of Water Resources (MoWR) in the late 1970s and going on to conduct two major evaluations – the Pokhrel Commission in 1987 and the UNDP review in 1995 – plus a failed activism later to have Melamchi re-designed as a multipurpose project.

The Melamchi story started during the last years of King Mahendra's reign. Although Kathmandu's public water supply system dates back to the Lichhavi period with the intricate stone water spout dhungey dharas still functioning today, to say nothing of the innumerable dug-well kuwas, it was the Rana rulers, specifically Bir Sumshere in 1885, who introduced piped water system to the capital city. It was managed by the Pani Goswara, whose jurisdiction was expanded in 1969 to improve the water supply and sewerage system of three cities of Kathmandu Valley in light of its expanding population and tourist influx. At the same time, a unit under the Ministry of Agriculture was charged with improving drinking water for the rest of the country, which was eventually calved out into a full-fledged Department of Water Supply and Sewerage (DWSS) in 1972 and placed under the MoWR.

King Mahendra passed away in January 1972; and preparations began for the coronation of King Birendra in 1975, for which (in light of all the foreign heads of state expected to attend) a massive beautification plan was rolled out and funds for it sought. As fate would have it, the 1973 Oil Crisis resulted in Western banks being awash in cash and looking for any profitable investment. Enter the World Bank and a bevy of international donors. While foreign aid as grants first entered Nepal in 1948 with US's 4H program under President Truman, it was in the early 1970s that Nepal encountered the Age of Development Loans with foreign aid agencies and their consultants, if not in the driving seat, certainly directing which way national plans were to go ahead.

A master plan study funded by UNDP and carried out by UK's Binnie & Partners examined, inter alia, over two dozen new water supply options for Kathmandu Valley, including storages in Balkhu, Kodku, Roshi Khola, Sunkosi/Trisuli pumping … and far away Melamchi. I was witness, as a junior engineer in MoWR in 1981, to discussions between the secretary, chief and deputy chief engineer of DWSS as well as other officials: of all the available options, they recommended going ahead with Melamchi because land acquisition issues in Kathmandu Valley would be problematic as people were more aware whereas those in far away Helambu were not and land there was cheap anyway! They seemed unaware that Helambu residents had served in Rana Durbars and were savvier with state doings than even our ministry folks. This was what eventually led to their being able to wrest more compensation than envisaged, including for Tinpiple and Panchkhal areas far away from Melamchi. But I digress.

The Binnie & Partners study eventually led, in 1974, to the World Bank's 1st Water Supply and Sewerage Project, just for Kathmandu Valley. Two others, the 2nd and 3rd Projects, followed that expanded coverage to Pokhara, Birganj, Biratnagar, Nepalganj, Butwal, Bhairawa, Hetauda, Janakpur, and Dharan. A 4th Project involving transbasin water transfer to Sundarijal from Melamchi headwaters was expected to start in the late 1980s to provide 24-hour water supply to Kathmandu as part of King Birendra's "Achieving Asian Standards by 2000AD" goals. That was when all hell broke loose, so to speak.

The last tranche of the 3rd Project was being held back by the World Bank because Nepal government had not done the massive tariff increase it had demanded. The World Bank had also insisted, as part of its covenant, in creating a wholly new outfit, the Water Supply and Sewerage Board (WSSB) to manage the project and its loan, bypassing existing institutional structures such as the Pani Goswara and the DWSS. (Shades of US's MCC today, bypassing transmission line building and operating capacity of the NEA and creating a wholly new organization to build its 400kV line?!)

The Marich Man Singh government was in a fix: World Bank's first three projects had failed to deliver on its promises and water users were not seeing any improvement in supplies, but the World Bank's only medicine for any management woe was to increase tariff, which obviously was politically infeasible. To investigate the state of the World Bank's projects, he formed the Pokhrel Commission in 1986 under the chairmanship of member of Rashtriya Panchayat and former chief engineer of the Department of Roads Birendra Keshari Pokhrel with National Planning Commission's joint secretary Bihari Krishna Shrestha and myself. 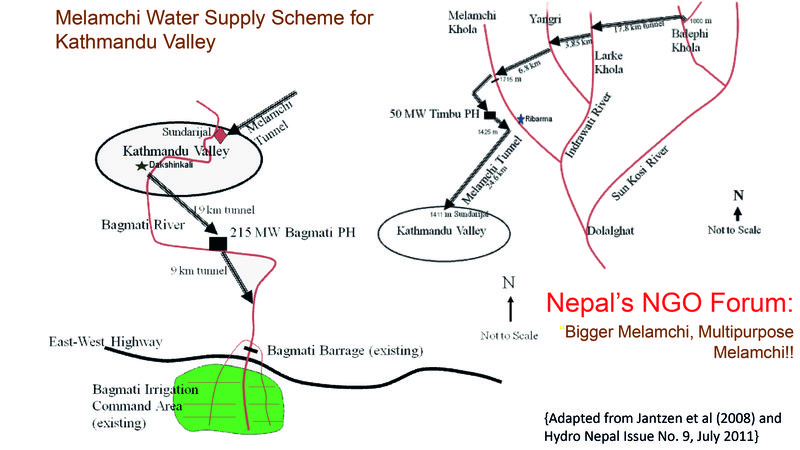 We visited all the cities and all the sites, interviewed everyone from lowly plumbers to engineers, accountants and World Bank experts. We came to the conclusion that WSSB was bankrupt and dysfunctional, that the procurement culture within it overshadowed any semblance of professional management. Our report corroborated and outlined in greater detail what the auditor general Bhubaneshwar Khatri had damningly described in a September 1984 report.

Just some examples would suffice to highlight the rot. For example, new sewerage line development kilometer target had been kept the same (to look good) but to meet the reduced funding crux, the diameters of the sewerage trunk mains were reduced from 42 inches to (in one case) as little as mere six inches! A sleight-of-hand was also employed to say that the WB project would build not sewerage lines that carried away combined flood flows and sewerage (then under the municipalities) but ones that handled "sullage" (i.e., kitchen and toilet flows) only! They never worked, and the sewerage line taking all of Kathmandu's waste to the Sundarighat treatment plant was never laid even though the contractor was already paid. (It currently houses solar panels, and Bagmati has become dirtier than ever.)

We recommended major institutional restructuring by devolving water supply management then under a nationally centralized WSSB in Tripureshwar for all major urban areas of Nepal to the respective municipalities. We also highlighted the priority that should be given to leakage and theft control in WSSB over rush towards supply augmentation procurement contracts envisaged in the 4th Water Supply Project. (Kathmandu's water supply system leaked on an average 70% with leakage, theft, and no meter reading and consequently no bill payment in some localities as high as 84%!).

The water supply hydrocrats were furious and the World Bank livid: they spent the next eight years suppressing the Pokhrel Commission report, but willy-nilly had to take into account its criticisms. In early 1990, the UNDP was roped in by the World Bank to contribute to a 60 million dollars basket to develop another 15-year development plan that included not just Melamchi for Kathmandu Valley but also management improvement of WSSB, by then a full-fledged corporation through "twinning arrangements" with utilities in Europe and America. Without major institutional reforms, for which neither the Nepali or donor hydrocrats nor the then new multiparty political class were ready, it was not going to work, and it did not.

I and a colleague of mine from Nepal Water Conservation Foundation/ Interdisciplinary Analysts were roped in to conduct an evaluation of this effort in 1995. We again revisited all the cities visited earlier during the Pokhrel Commission work, and came to the conclusion that water supply management had, rather than improve, deteriorated even further. At this point, the World Bank lost any will to continue further and pulled out of Melamchi and, in a blatant display of donor competition, the Asian Development Bank jumped in with the Norwegians (whose interest was in using its Himal Hydro and BPC to develop the tunnelling and the powerhouse) and the Japanese (interested in hydropower and treatment plants).

In an amazing display of sector competition within Nepal and the donor community, the Norwegians and the Japanese were edged out and the hydropower component removed. The massive energy from the head between Melamchi and Sundarijal, instead of generating anywhere from 15 to 50MW of electricity, was criminally wasted and instead hydraulic baffles used to dissipate the energy. Nepal's NGO Forum campaigned to have Melamchi be made into a multipurpose project additionally including hydropower, sewerage treatment and irrigation that would also pay for the immense cost of the tunnel. However, the then finance minister dismissed them by saying he would listen to the ADB and not to them!

It was only towards 2007 that a new distribution system was included with the Melamchi plan, and only now three decades later that Hetauda, Bharatpur and Dharan's water supply system have finally been finally handed over to the respective municipalities.

What wasted decades for sensible, competent and efficient development!