Multi-Hazard Resilient School Facility is Reconstructed and Back to the Students in Patandhoka, Lalitpur 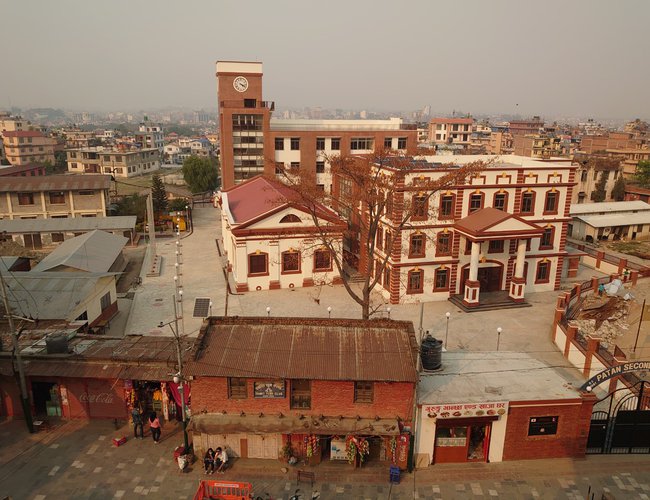 Following the damaged by 2015 earthquake, Patan Secondary School (Patan High School, one of the oldest school of Nepal, was looking for Nepal’s development partners. Since then the school faced difficulties in managing classrooms and education for the students. Japan International Cooperation Agency (JICA) took the task to rebuild the historic school.

The reconstruction of the facilities started in December 2018 under the Emergency Reconstruction Project (ESRP) supported by JICA. The Project is being implemented by Central Level Project Implementation Unit of NRA.

Under the ESRP, JICA has supported to build school buildings, roads and other infrastructures in Nepal.

The newly reconstructed buildings of Patan Secondary School- the second oldest school in Nepal was handed over to the school management committee today. The school situated in Patandhoka, Lalitpur was severely damaged by 2015 Gorkha earthquake amid a function on April 19.

The secondary school was established back in 1924 AD (1981 BS) and now have nearly 900 students altogether. The new buildings were reconstructed with multi-hazard resilient structures which are environment, child, and gender and disable friendly to provide improved learning environment for the students based on the concept of Build Back Better (BBB) which increases resilience not only physically but also socially.

The reconstructed buildings were also designed to be a “complete school” which provides all the necessary facilities for the education to the students. In the new school, there are classrooms with furniture for Early Childhood Development (ECD) to grade 12, science laboratories (separate for physics, biology and chemistry), library, computer laboratory, separate toilets for girls and boys with water supply, handwashing facilities and retrofitted conference hall.

Speaking at the handover and inauguration ceremony, Prime Minister KP Sharma Oli appreciated all relevant stakeholders for close collaboration and efforts for timely completion of the construction, and thanked to Japan for valuable support to reconstruct focusing on BBB Concept. He emphasized that quality education can be provided to students by utilizing the reconstructed facilities.

Chiri Babu Maharjan, Mayor of Lalitpur Metropolitan City highlighted history of the school and expressed happiness that the oldest school of Lalitpur has got a latest technology

In speech of Yukata Kikuta, Ambassador of Japan to Nepal which was delivered by Ms. Yumiko Asakuma, Chief Representative of JICA Nepal, he congratulated the completion of this work together with Japan and Nepal. He emphasized that the project further strengthens the relationship between the two countries.

Emergency School Reconstruction Project (ESRP): Total 236 schools are being built and s reconstruction of 38 additional schools started in January 2021 at a total cost of JPY 14 billion (about NPR 12.7billion) to support the reconstruction of disaster resilient schools in Gorkha, Dhading, Nuwakot, Makwanpur, Rasuwa and Lalitpur Districts, based on the earthquake-resistant type design guidelines formulated by JICA under the principle of “BBB