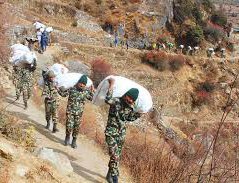 A Nepali Army team of Mountain Cleaning Campaign (MCC) 2021 Everest area has used helicopter to ferry garbage on Sunday. Air transport was used to ferry garbage accumulated at camp two to the base camp.

Major Aditya Karki, a liaison officer of the MCC 2021 at the Everest region, said the cleaning team was forced to use a helicopter just because of unfavorable weather at the Everest.

''We did bring all garbage to the base camp from above, but on Saturday we could not do so easily. Therefore, we took air transport,'' said Karki who is also an Everest climber. He added, ''However, we do not use air transport to transport the garbage collected at the base camp.''

Nepali Army has handed a chunk of biodegradable wastage to Sagarmatha Pollution Control Committee on Monday morning. Karki himself handed over 418 kilograms of garbage. The remaining 300 kilograms is also in the pipeline, said Karki.

''All remaining non-biodegradable garbage would be ferried to Kathmandu and would be handed over to the organisation working on the environment sector,'' said Kraki, adding, ''This would happen on the occasion of World Environment Day on June 5.''

Karki said 12.6 tonnes of garbage was accumulated from Everest, Lhotse, and Pumori mountains. Out of this volume, 9.5 tonnes was collected from above the base camps of the mountains.

This is the third Everest cleaning campaign launched at the initiation of the Nepali Army. The first and second were held in 2011 and 2019 when garbage of four tonnes and 10 tonnes were collected respectively.

However, this year, Nepali Army enlarged its mountain cleaning campaigns including other mountains like Lhotse, Makalu, Dhaulagiri, Pumori, and Ama Dablam.