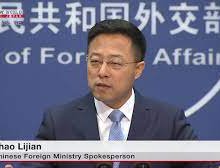 China's foreign ministry has offered sharp criticism of the Group of Seven leaders' communique, which included references to the Taiwan Strait and human rights in the Xinjiang Uygur Autonomous Region.

The communique, issued after the recent G7 summit in Britain, underscored the importance of peace and stability across the Taiwan Strait, and called on Beijing to respect human rights and fundamental freedoms in Xinjiang and Hong Kong.

At a news conference on Tuesday, Chinese Foreign Ministry spokesperson Zhao Lijian expressed strong dissatisfaction and opposition to the communique.

He said it slanders China and interferes in China's internal affairs. He also said a small number of countries including the United States are attempting to create rifts and widen differences.

The spokesperson hit back especially hard at the US, describing it as "very ill indeed." He said the G7 should take Washington's pulse and come up with a prescription.

Zhao also touched on a joint statement issued by NATO leaders after their summit on Monday. He said trying to force other countries to choose which side to take according to ideology goes against the course of history of peaceful development and cooperation.

China Partially Lifts Lockdown In Southern City of Guangzhou After Protests By Agencies 3 days, 10 hours ago

Beijing Grapples With 'Zero-COVID' Unrest By Agencies 5 days, 10 hours ago