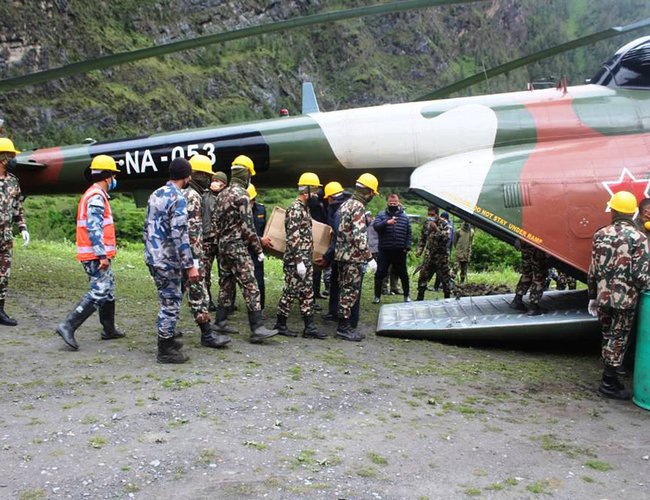 Manang, June 18: Flood survivors in Manang district were rescued with the help of two helicopters on Friday.

Of them, 56 were picked up from Phu are of Narpabhumi rural municipality, 55 from Naso and 10 from Odar.

Efforts are on to settle survivors from different parts of the district at Chame.

Several settlements at four rural municipalities in the district have been isolated following the incidences of natural disasters.

Rescue efforts are ongoing in other affected areas while helicopters are trying to trace whether someone else is trapped by the disaster.

A Nepali Army helicopter is mobilized with the coordination of Home Minister while former lawmaker Polden Chhopang has arranged another helicopter at a personal expense.

Floods and landslides triggered from the incessant rains have battered life in Manang, causing complete disruptions of traffic, power supply and communications systems.

Flash floods in local rivers have caused massive soil erosion at different parts of the district.

Earthquake In Sudur Paschim: Six killed In Doti By Agencies 3 weeks, 4 days ago