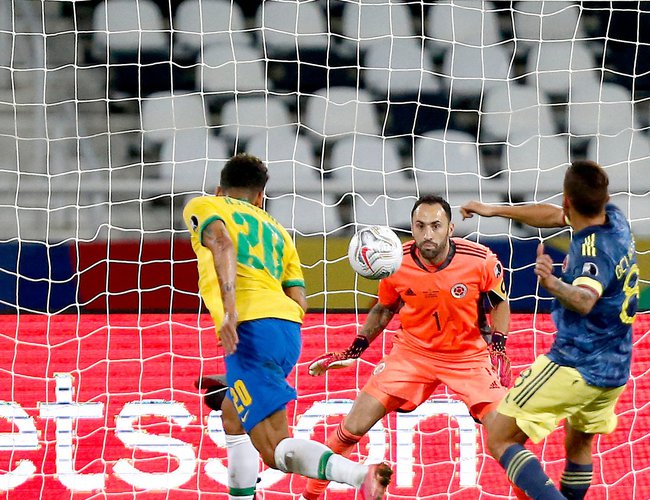 Match official Nestor Pitana was at the centre of controversy, with Brazil going on to score the winning goal after 10 minutes of stoppage time

Colombia have been left furious by their 2-1 defeat to Brazil in the Copa America group stage on Wednesday, as Roberto Firmino's 78th-minute equaliser came after referee Nestor Pitana had touched the ball.

Real Madrid midfielder Casemiro would add to Colombia's woes as he scored a winner deep into stoppage time, with Reinaldo Rueda's side having come close to what would have been a famous win over the Selecao.

Several Colombia defenders appeared distracted when Pitana accidentally intervened for the equaliser - the ball hitting him after Neymar had attempted a drilled pass - and Firmino would eventually nod home, leaving Rueda and his players hugely frustrated.

"The two goals for Brazil are different situations," Rueda told reporters. "With the first, I think that the situation with the referee caused a distraction in the players.

"Brazil had to go out to find a way back into the game, they had a good possession of the ball and the players who came on had an influence. That is perhaps why [the second half was different].

"But we were incisive and in the end it is a pity that the result could not be achieved."

Juventus star Juan Cuadrado was more direct in his criticism of the officials, stating on Twitter, accompanied by an image that lists the rules when the ball hits the referee: "It's not that I'm a bad loser but the rules are the rules."

He added: "Work, effort, discipline is stained by a mistake. Proud of my selection. Trusting in God that tomorrow will be better."