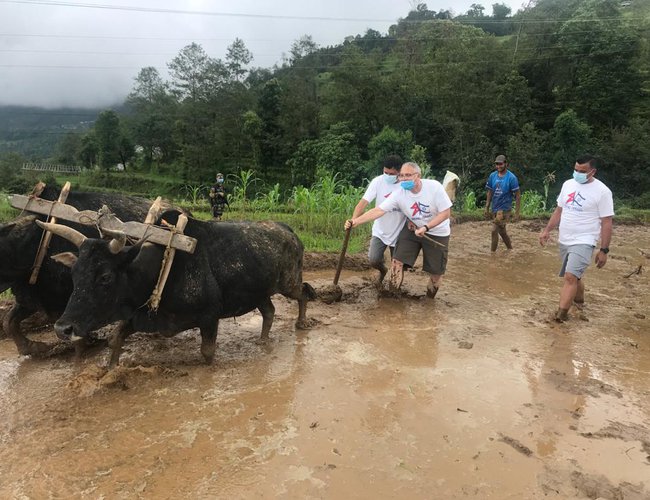 Farmers across the country observed the 18th National Paddy Day and paddy festival by planting paddy and savoring Dahi Chiura (curd and beaten rice) on Tuesday. About 27% of plantations complete across the country

The theme of the 18th National Paddy Day was ' Increase in paddy production, food security, self-reliance and prosperity.

The Day is marked on the 15th day of the month of Asar every year. The day is also known as the day to enjoy curd and beaten rice.

Farmers were busy planting rice at their fields as the nation received adequate rainfall before Asar 15 this year. Asar is popularly known as ‘mano ropera muri ubjaune’ (growing more by sowing less) time.

Paddy plantation has completed in around 27.12 per cent of the country’s total paddy field as of Tuesday.

Mahadev Prasad Paudel, information officer of the Department of Agriculture, said that paddy has been planted in 27.12 per cent of the paddy field across the country, which is 8 per cent less than the previous year.

Paddy plantation has completed in around 371,958 of 1.37 million hectares of paddy field so far.

Paddy plantation is going on in full swing across the country as there has been regular rainfall and availability of fertilisers, he said.

According to the department, plantation has just started in two provinces—Province-1 and Province-2, which account for about 75 per cent of the total paddy production.

In Karnali, paddy has been planted in ​​62.14 per cent of paddy field while only 10.55 per cent of the plantation has been done in Province-2.

MD GHISING Leakage To Single Digit By A Correspondent 3 days, 3 hours ago