Pedri's 'Playing A Euros Before He Can Drive'! - Barcelona's Teen Sensation Destined To Become A Spain Legend

Pedri's 'Playing A Euros Before He Can Drive'! - Barcelona's Teen Sensation Destined To Become A Spain Legend 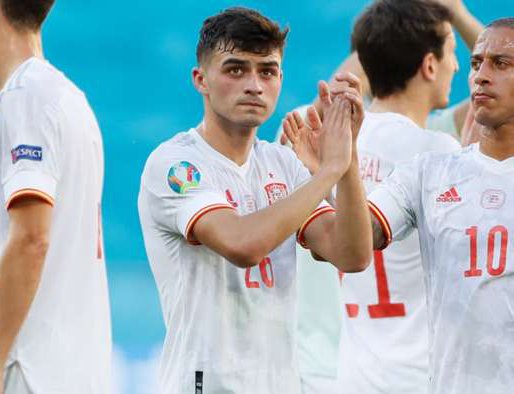 Pedri Gonzalez has not only become Spain’s youngest ever player at a major tournament this summer but also one of the first names on Luis Enrique’s teamsheet.

The 18-year-old Barcelona midfielder has started each of La Roja’s four games at Euro 2020, despite only making his debut for the national team in March. The other Spain players to have started in each match are goalkeeper Unai Simon and centre-back Aymeric Laporte.

Pedri has been the side’s heartbeat at this tournament, impressing even in the frustrating draws with Sweden and Poland, before dazzling as they put five past both Slovakia and Croatia.

It’s a career only just beginning but sees him seated at the table of the elite already, feeding the likes of Messi at club level and now pushing an inexperienced Spain team, which he is an emblem of, towards the final stages of Euro 2020.

As Alvaro Morata told Cadena SER on Thursday, "When we were on the plane yesterday I told him he’s playing a Euros before he can drive! Yet he plays like he’s 40 years old.

"He's only 18 but has a personality and attitude that few possess. Pedri will become one of the best players in the history of Spain without a doubt."

With Spain dominating the ball like it’s 2008 again, Pedri will be key against Switzerland in Saint Petersburg on Friday in helping convert their inevitable possession into gilt-edged chances.

Often compared to the legendary Andres Iniesta, Pedri has a similar knack of being the man to assist the assister, the genius who makes the final ball possible. He produced a hat-trick of ‘pre-assists’ in the 5-0 rout of Slovakia, and was at it again against Croatia.

He formed a remarkable partnership with Lionel Messi at Barcelona last season, which was only diluted when Ronald Koeman asked him to play deeper on the pitch, as the club shifted to three at the back.

There, he combined well with Sergio Busquets and did his defensive tasks diligently, something which caught the attention of Luis Enrique, even if Pedri has been assigned a more attacking role by the Spain boss.

Indeed, with no Messi figure to create, it is Pedri who has emerged as the team’s central playmaker, ahead of Busquets and the hard-working Koke. As usual, he has embraced the added responsibility with the minimum of fuss.

“I’m calm, knowing I have a lot of room to improve and I have to,” Pedri told Diario Sport in an interview. “I try to learn things from the veterans here and at Barca to improve.

"I try to think about the play, look for the free man and play going forwards. If you break lines, the team advances and you can help a lot."

Spain arrived at the tournament a work in progress, and it was not guaranteed that Pedri would be starting.

By the final 20 minutes of their first match against Sweden, a 0-0 draw in which they missed bundles of opportunities, Spain were looking for Pedri to be their solutions man in attack, time and time again. It nearly worked, with his ball to Jordi Alba carving out a fine opportunity for Pablo Sarabia, but the Paris Saint-Germain winger spurned the chance. 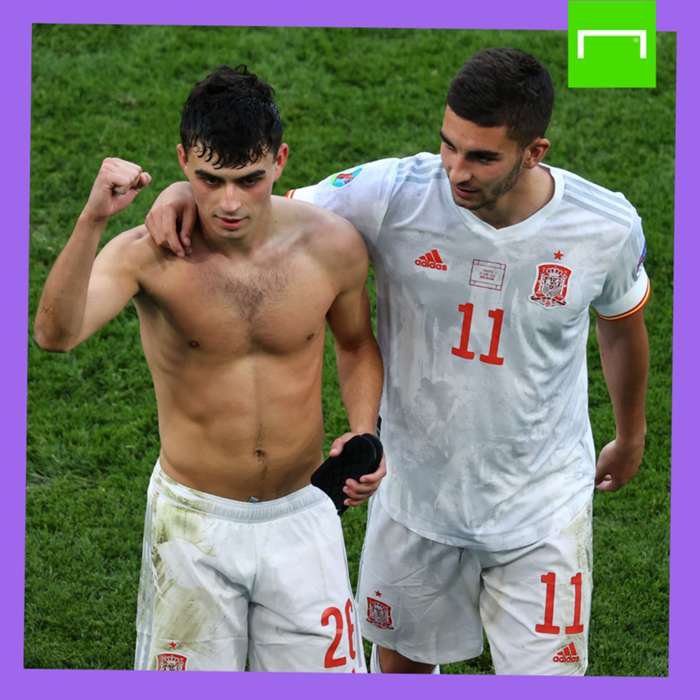 He made 16 progressive passes in that game – more than any other player in the first round of matches. “He’s getting better and better as the minutes go by,” a source close to the player told Goal.

Linking up with another club-mate Jordi Alba to great effect on the left side, finding Ferran Torres with regularity on the right, Pedri has covered a lot of ground for Spain at the Euros.

His physical capacity has long stood out – and, in that regard, he differs from the artful Iniesta – and as far back as his early teens he was drawing admiration for his work-rate and stamina.

As his former Las Palmas and Juventud Laguna team-mates told Goal, Pedri has always paired his superb technical ability with the rigour and professionalism the modern game demands.

Thus far at Euro 2020, he has left Thiago Alcantara, the former Bayern Munich and current Liverpool star, playing a bit-part role from the bench.

As with Pepe Mel at Las Palmas, who put him in the team at age 16, as with Koeman at Barcelona, who bet big on Pedri and played him over 50 times, the Tenerife-born starlet has repaid Luis Enrique’s faith in him.

"Sometimes actions define a situation better than words," Luis Enrique said when asked about Pedri's influence. "He’s totally unique, totally different to everything else we have.

"He’s a breath of fresh air, even when he plays table tennis, and from what I’ve seen, he’s very good at that too!"

Despite the fact that he excelled during his debut campaign with Barcelona, with his performances helping him secure a fourth-place finish in Goal's most recent NXGN list of the world's top teenagers, the maturity he is displaying in the international arena is startling.

It took him a few minutes to recover from the shocking moment goalkeeper Unai Simon let Pedri’s near 50-yard pass-back roll past his foot and into the net, but he steered Spain back on course.

Pedri’s delightful dink into the box created havoc in the Croatia area and it led to Sarabia’s leveller, before Spain rampaged to a 5-3 win in extra-time.

“I’m proud to be compared with Iniesta because he is a great player and person,” the youngster said afterwards. “But I have to be Pedri and try to have my career.”