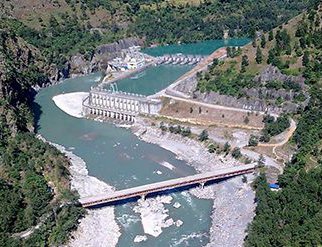 A single bench of Chief Justice Cholendra Shumsher JB Rana ruled that the natural flow of the Kaligandaki River should not be diverted until a final verdict on the sub-judice case is passed.

“Considering the religious, historical and environmental significance of Kaligandaki River, an interim order has been issued to halt all works relating to diversion of the flow of the river, construction of the reservoir, extraction of Saligrams, and any work that pollutes or exploits the river until the final decision,” read the interim order issued on July 13 according to Rule 49 (2) of Supreme Court Rules, 2017.

The SC also sought all the details regarding the project and an explanation as to why the project should not be scraped along with legal reasoning backed by evidence, if any, with the respondents within 15 days.

Earlier, on July 7, a single bench of Justice Tej Bahadur KC had asked for written responses from the respondents.

Stating that the Kaligandaki River, the only river where sacred stone Saligram is found, was being diverted towards Tinau stream, senior advocate Prakash Mani Sharma, among others, had filed a writ petition in the SC demanding the stoppage of the project.

The KP Sharma Oli-led government had already set up an office in Butwal to move ahead with the project which had invited a series of controversies as a section of the river also acts as the border between Lumbini and Gandaki Province.

The 300-kilometre long Kaligandaki River originates from Mustang and joins the Gandak in India, supplying water to various districts in Nepal.

World AIDS Day 2022: The AIDS Response Is In Danger By NEW SPOTLIGHT ONLINE 3 days ago