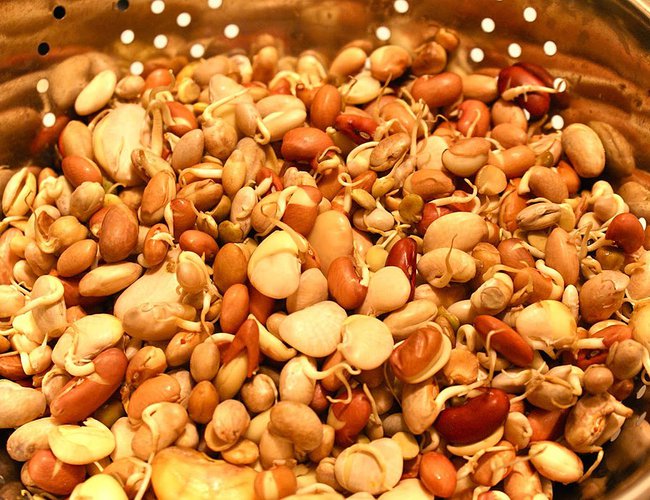 On the first day of the festival which is the Full Moon day, the Buddhists rejoice as the day when the Buddha mastered over his desires and mayas. The whole month early in the morning Buddhists in procession playing a particular musical instrument goes to Swaambhunath to pay their homage. On this very day Nepalese people of different faith go to about 16 thousands feet above sea level to have the darshan of invisible Shiva who is supposed to be resting inside the glacier lake after swallowing the poison which he took to protect the Universe. On that very day at Kumbheshwor at Patan in Lalitpur District people in large number take dip in a pond which is said to have a sub terrene an connection with the glacier lake of Gosaikunda. Tin the middle of Kumbhewhwar pond a big phallus of Mahadeva is seen .

Thus we see the Nepalese Buddhist or Non- Buddhist pay homage to their gods and perform the function of paying back the Deva- Rina. This day is also celebrated with tying of golden colored cotton strings around the wrist by Brahmin- in ancient time’s representatives of intellectual or teacher class did the same. This day also witness the changing of the sacred thread by these men. Sacred threads in the past were the symbol of initiation of the individual to education, the life of wisdom. All this reminds one of the ” Rishi- rina” . . About the tying of strings around the wrist we are told of the story of a king Bali who is said to have boundless benevolence. Thus the strings signify the protection of individuals from all evils. But Nepal preserve an interesting account of this. The golden colored strings are tied on that day to indicate that the King Bali comes out from ” Paatal” making underground , to see whether his subjects are well fed or not and takes the golden color strings as the golden bangles and goes back satisfied seeing the welfare of his people.

Today the gates of the Afterworld are opened Yama Raj, Lord of Death , studies his great ledger and decides where the souls of all late mortals will be reborn. It’s a long and dangerous journey from death to Yama’s gates, but the sacred cow, most beloved and honored of beasts, can lead the departed through the dangers and push open the gates with its horns. On this day families who’ve last a loved one will enact the Processsion of the Cows, praying that , as above so below, their family member will be led safely to Lord Yama’s gates.
After morning prayers for the dead, the family procession begins. The family priest and accompanying musicians are followed by gentle cow adorned with flower garlands and a red tika mark on its forehead- or by a substitute cow- face mask on top of his head. Another little boy tags along, with a painted moustache and yellow loincloth- a yogi or holy man .
In the town of Patan all the ” Cows” and ” yogis” gather together. To the din of beating drums and blasting horns and the clatter of pots ad pan strung from the cows’ tails, the herd winds its way merrily through the streets appeasing the gods and fighting away evil spirits. On the day of GaiJatra, the narrow lanes of Kathmandu are filled with charming little cow processions of individuals families. All eventually make their way past to Hanuman Dhoka at Kathmandu’s Durbar Square, for tradition says the festival was begun by the 18th century King Pratap Mallla to bring laughter to his people to come to the palace and do whatever they wished, no holds barred, to make the Queen laugh.
The public turned out- in crazy costumes with jokes and jibes and lampoons , poking fun at all the institutions of the day, ridiculing ministers and functionaries, husbands and wives, anything within reach. Now the queen laughed.
The carnival of Gaijatra continues to this day. Men dress up in women says, as soldiers, foreigners and silly animals. Inspired by rice beer and loud discordant band music, laughter and dancing continue long into the night. From the Procession of the Cows to the carnival of Craziness, GaiJatra is one of the most hilarious and colorful days of the festival year.

Thus though this phase of festival is said to have started to console the queen showing that not only her son but many have died, it is related with human obligations towards their manes think, it is related with human. This pitririna aspect becomes more clear when we see that on that very day the Buddhist go round the city playing the musical instruments and blowing the horns. This is generally done under the request and the expense of the family where someone has expired during the preceding year. The Buddhist belief that the horn on that day causes the opening of Shatipur , cave temple at Swambhu and thus enables the spirit of an individual to have the peace- the heaven of Hindus.
The second phase ,or the after noon phase of the festival in Kathmandu is full of jubilant and comic scenes. In the funny dress and the clown like action they give fun to the onlookers. But at the same time, this phase has some other significance. Because this day presents an occasion to the mass to comment or criticize any social or political events which was not satisfactory to the people. The comments on local and national problems by them to suggest deeper implications this festival.
Today the agates of the Afterward are opened Yama Raj, Lord of Death , studies his great ledger and decides where the souls of allot mortals will be born. It’s a long and dangerous journey from death to Yama’s fates, but the sacred cow, most beloved and honored of beasts, can lead the departed through the dangers and push open the gates with its horns. On this day families who’ve lasts a loved one will enact the Procession of the Cows, praying that , as above so below, their family members will be led safely to Lord Yama’s gates.
After morning prayers for the dead, the family procession begins. The family priest and accompanying musicians are followed by gentle cow adorned with flower garlands and a red tika mark on its forehead- or by a substitute cow- face mask on top of his head. Another little boy tags along, with painted mustache and yellow loincloth- a yogi or holy man .
The peculiarity in Bhaktapur is that each group follows four or six men, carrying a pole decorated with foliage and green pine branches on which are affixed mirrors, images of various gods and goddesses in particular, enlarged photographs of those who had passed away during the year. The top of the pole is “protected” by a yak-tail and an umbrella.
Some of the teams consist in two rows of boys (some of whom are dressed like girls, usually pouring change out of a vessel or a bottle and distributing it to the “real” boys) The two rows face each others and, following the rhythm of the drums and other musical instruments, mimicking an old traditional “stick-fight dance” each boy holding two sticks in his hands with which he attacks his partner and defends himself.

It is generally agreed and said that fests and festivals are the attractions of human life. They preserve in them the religious beliefs, the social customs and the economic outlook of the people. Festival, however, started through out the world out of admiration, fear and curiosity of human mind. They are part and parcel of Nature- the friend and the foe of man. The conception of heaven or hell, the basic foundation of many of our festivals, is also the outcome of the basic phenomenon.
The typical festival of Nepal Gaijatra which lasts for a week includes many interesting phases of Nepalese life and outlook. The festival as a whole seems to be the outcome of the three ”Rina” philosophy of Hindu life- the devarina, the risirina and the pitririna. During the festival the people of Nepal pay back the debt of their gods and teachers.
GaiJatra is the procession of cows and is dedicated to God Yama – the god of death. It is observed the day after Raksha Bandhan and Janai Purnima in Nepal. GaiJatra 2010 date is August 25. People who had a death in their family during the previous year take part in the procession. People participating in the procession walk along with a cow and those not owning a cow take boys dressed like cow.
In the GaiJatra procession people attack social evils and customs through tableau, fancy dressing and by performing small dramas. After the procession, people participate in the festival of masks – by wearing different type of costumes and masks and making merry.
Historians are of the view that King PratapMalla had once lost a son and the Queen was depressed. She stopped talking and reacting. The King made a promise that he will reward anyone who can make the queen laugh. So, during the Gai Jatra procession people started making fun of social evils and other customs to make the Queen happy. The Queen finally laughed and the Gai Jatra became a custom.