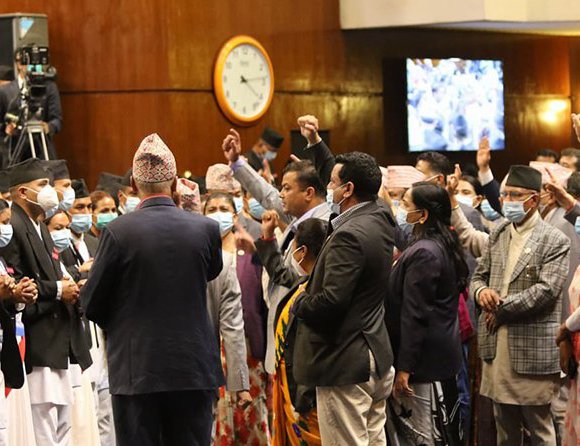 Following the opposition from the the CPN (UML, the meeting of the House of Representatives has been put off. CPN-UML MPs obstructed the house demanding the clearance from speaker Sapkota.

At the beginning of the meeting, UML chief whip Bishal Bhattarai said that the UML would not allow the session's meeting to move forward until the Speaker responds as to why he did not issue notice about the 14 lawmakers that the UML had taken action and removed them as member of the HoR.

In response, Speaker Sapkota urged the UML lawmakers who were chanting slogans against him to read again section B and C of Rule 21 of Parliament Regulation 2075 BS. He urged them to not go beyond the grace and norms of the parliament.

Earlier in the Parliamentary party meeting, CPN-UML Chairman KP Oli had announced not to let the House of Representatives (HoR) meeting chaired by Speaker Sapkota to function smoothly.