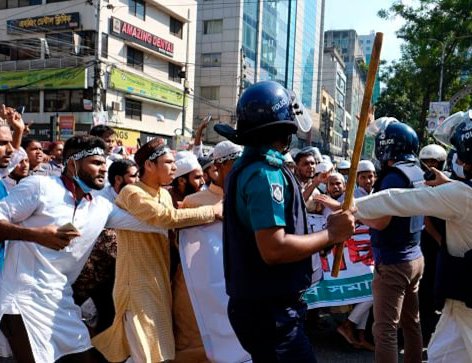 In Chittagong, the Bangladesh Hindu Buddhist Christian Unity Council has announced a sit-in and hunger strike from 23 October in protest against the attacks during the Durga Puja celebration

A Hindu temple has been vandalized in Bangladesh in a fresh case of communal unrest amidst days of violence unleashed by unidentified Muslim bigots who attacked the minority community's places of worship during the Durga Puja celebrations over alleged blasphemy, prompting a minority group to announce a countrywide hunger strike, media reports said on Sunday.

Meanwhile, police in Dhaka have booked more than 4,000 named and unnamed protesters after clashes broke out between security forces and demonstrators over the alleged desecration of the Quran in Cumilla, on Friday. The cases have been filed across three police stations in the city — Paltan, Ramna and Chawkbazar — for vandalism, assaulting security personnel, and obstruction of government duty, officials said.

Hindu-owned temples and shops in Feni, about 157 km from the country's capital, have been vandalized and robbed during fresh clashes on Saturday which broke out after an attack on demonstrators who were protesting against the attacks on Durga Puja venues in several places in Bangladesh, the Dhaka Tribune newspaper reported.

The clashes left at least 40 people, including the officer in charge Nizamuddin of Feni Model Police Station, injured in the clashes, it said.

On Saturday night, authorities deployed additional police forces and the paramilitary force — Border Guard Bangladesh (BGB), after several temples and businesses owned by Hindus were vandalized and robbed during clashes that lasted from 4.30 pm (local time) to midnight, the report said.

The report said that some miscreants on Saturday vandalized six idols at the Daniapara Maha Shoshan Kali Mandir in Rashunia union of Sirajdikhan Upazila in Munshiganj, about 40 km from Dhaka.

It said that protests against attacks and vandalism on Hindu temples during the Durga Puja celebrations continued across the country on Saturday, as did the vandalism that led to the public outcry.

Meanwhile, in the country's southeastern port city of Chittagong, the Bangladesh Hindu Buddhist Christian Unity Council announced a sit-in and hunger strike from 23 October in protest against the attacks during the Durga Puja celebrations.

The protest events will take place at Dhaka's Shahbagh and Chittagong's Andarkilla, the council's general secretary advocate Rana Dasgupta said at a press conference at the Chittagong Press Club.

Before making the announcement, the forum observed a six-hour strike in Chittagong on Saturday.

The Bangladesh Puja Udjapan Parishad has demanded exemplary punishments for those involved in the rampant vandalism, violence and mayhem that took place during the Durga Puja celebrations.

Milan Kanti Dutta, president of the forum, said that they would launch a tougher movement if the government did not pay heed to their demand.

"From the home minister to ruling party general secretary Obaidul Quader, everybody has assured us saying they are informed about everything. If you know everything, why are you not punishing the culprits?" he asked.

Charu Chandra Das Brahmachari, general secretary of ISKCON Bangladesh, warned that the community would not sit silent and watch the attacks happen.

"We believe a group of fundamentalists is initiating such hatred to upset religious harmony. We also know some activists of the ruling party are affiliated with such heinous crimes at some locations.

"I would like to urge the prime minister to not become weak and take action against them too," he said.

The leaders of the forum also demanded the enactment of a protection law and a national minority council.

Meanwhile, the ruling Awami League-backed Blue Panel teachers of Dhaka University on Sunday strongly condemned the vandalism at several Durga Puja venues and idols in various places across the country.

Blaming the Opposition for the violence, Information and Broadcasting Minister Hasan Mahmud on Saturday blamed the Bangladesh Nationalist Party (BNP) for engineering violence.

" BNP-Jamaat is involved in communal incitement. The BNP-Jamaat has chosen the path of various conspiracies by failing to deal with Prime Minister Sheikh Hasina politically.

"There was a political motive behind the incident in Comilla which has provoked communal outrage across the country, the minister said.

Mahmud said that those vandalizing temples and attacking the law enforcers are being identified through CCTV footage.

The masterminds behind the violence will also be brought to justice, he added.

The Durga Puja celebrations on Friday concluded in Bangladesh amidst days of communal unrest and violence over alleged blasphemy, leading to the deployment of paramilitary forces in more than half of administrative districts.

The paramilitary Border Guard Bangladesh (BGB) has expanded the vigil from 22 to 34 out of 64 administrative districts.

The elite anti-crime Rapid Action Battalion (RAB) said it expects to arrest some of the key perpetrators of the sporadic violence which took place in the past three days.

So far, five people were killed and scores of others injured during clashes between Muslim bigots and the police at Hajiganj sub-district in central Chandpur on Wednesday and Thursday.

On Thursday, Prime Minister Sheikh Hasina promised to bring to justice the culprits behind the violence, saying anyone involved in the attacks on Hindu temples and Durga Puja venues in Comilla will not be spared.

"The incidents in Comilla are being thoroughly investigated. Nobody will be spared. It doesn't matter which religion they belong to. They will be hunted down and punished," she said while exchanging greetings with the Hindu community members during an event at Dhakeshwari National Temple in Dhaka on the occasion of Durga Puja.

The violence had erupted after an alleged blasphemy incident at a Durga Puja pavilion in Cumilla, bordering Chandpur and about 100 km from Dhaka, after which a probe was launched.

Sporadic clashes continued on Friday between police and bigots while extreme right-wing Islamic Shashontantra Andolon Saturday took out a big procession in downtown Dhaka's Purana Paltan area protesting what they called as "demeaning of the Holy Quran".

The Durga Puja celebrations, considered to be the biggest festival of the minority Hindu community in Bangladesh, concluded without the traditional Bijoya Dashami procession.
Due to the COVID-19 situation, the procession was not carried out this year.

This year, the Durga Puja began on 11 October. Hindu devotees paid tribute to Goddess Durga for four days and immersed the idols in rivers on the fifth and final day on Friday.

This year, Durga Puja was celebrated at 32,118 puja pavilions across the country, including 238 in the capital Dhaka, the report said.

Banking On Hydropower Entirely Is loss-making: Bhutanese Daily By Agencies 3 months, 1 week ago