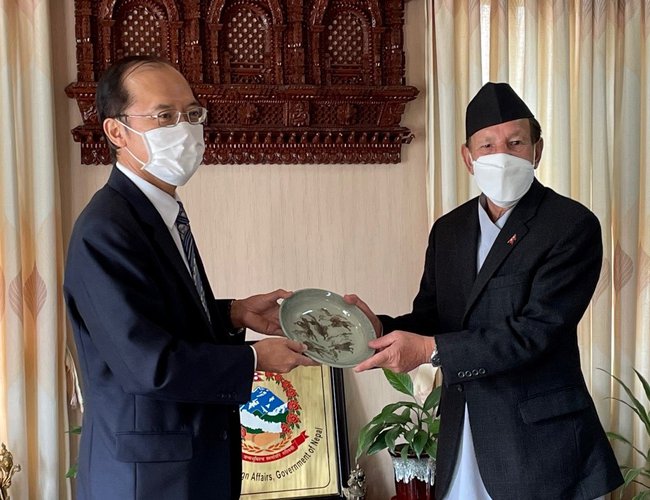 Ambassador Kikuta and Foreign Minister Khadka shared the views to cooperate further to expand the bilateral relations between the two countries, as the year 2022 commemorates the 120th anniversary since the first Nepali students travelled to Japan in 1902. Furthermore, Ambassador Kikuta mentioned that Japan had been working with Nepal as a friendly development partner and will continue to assist the country’s challenge to deal with the COVID-19 situation, moreover, they are for the socio-economic development and recovery of Nepal from the pandemic. As an example of the recent assistance,

Ambassador Kikuta mentioned the Government of Japan’s contribution to UNICEF for the cold-chain facility to ensure vaccines to reach all as “Last One Mile Support.” Foreign Minister Khadka expressed his gratitude for Japan’s cooperation and assistance in multiple ways to overcome the difficulties caused by COVID-19, including the provision of 1.6 million doses of vaccine and medical equipment Ambassador Kikuta emphasized the long-term bilateral relationship between Japan and Nepal and expressed his wish to further deepen the close partnership by resuming the people-to-people exchange once the pandemic situation will ease soon.

16 Day Of Activism Against Gender Based Violence By NEW SPOTLIGHT ONLINE 20 hours, 57 minutes ago