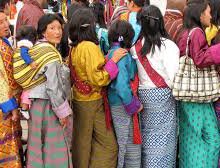 If the national debt is divided among the population, every Bhutanese would have to chip in Nu 315, 288, which amounts to an annual salary of an officer-level civil servant earning a monthly salary of Nu 26,274.Link

However, a major portion of the debt is related to borrowings for hydropower amounting to Nu 162.359B accounting for 73.40 percent of the total external debt in FY 2020-21.

Moreover, the Royal Audit Authority (RAA) found out that the debt to GDP ratio has been increasing for the past three years.

The increase in the debt was accredited to the constant increase in the government’s fiscal deficit over the years due to limited revenue growth and increased public spending, the report added.

Internal or domestic debt made up 7.16 percent of the total external debt amounting to Nu 17.074B.

The government borrowed Nu 13.170M from the National Pension and Provident Fund (NPPF), Nu 361.267M as NPPF loan to Bhutan Hydropower Services Limited, Nu 3.7B as bond borrowing, and Nu 13B for treasury bills.

It added that the high proportion of internal revenue being consumed by recurrent expenditure inevitably showed the syndrome of dependency on grant borrowing.

“The grant being donor-driven and outside the government control and not certain both in terms of timing and cash flows, a judicious fiscal policy is imperative,” it stated.

The report further recommended that the risk of borrowing is associated with huge public debt which has a long-term negative impact on economic sustainability.