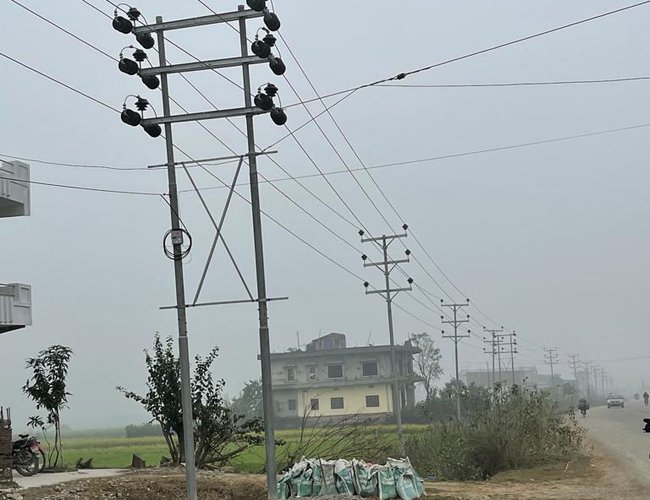 Nepal Electricity Authority (NEA) Managing Director Kul Man Ghising said that the power supply problem of the industrial areas could be solved as soon as both the transmission lines came into operation.

Inspecting the completion work of 27 km 33 kV double circuit transmission line from 132/33 kV substation in Gandak to Parasi, he said that power shortage in the areas come to an end.

Constructed by NEA, the 19-kilometer single circuit transmission line has been completed and brought into operation within two months.

"The industries in the area were forced to operate turn by turn for some time during the summer season due to insufficient power supply for lack of transmission lines. Now this situation has come to an end and the industry can get electricity as per the demand," said Ghising.

After visiting the area a few months ago, Ghising had directed the NEA Regional Office, Butwal and Butwal Grid Division to expedite the construction of Butwal-Jamire transmission line targeting industries of the Sunwal area.

The 19-kilometer single circuit transmission line has been completed and brought into operation within two months, said Nawaraj Ojha, director of the provincial office, Butwal.

Problem of inadequate power supply to Parasi and Sunwal industrial areas of Nawalparasi is likely to be resolved forever. That’s because 24-hour power has been ensured to all industries operating there.

Industries, including Laxmi Steels, Palpa Cement and Sarbottam Cement are operating in the Sunwal area. Those industries have demanded more electricity to increase their capacity, while other new industries are also opening in the area.

"Electricity can now be supplied from three 33 kV circuits, including the old one and the two constructed at Gandak Parasi. Due to the shortage of electricity, the industries in the Parasi area will no longer have to run alternately," said director Ojha.

The electricity would be supplied to Gandak substation from Bardaghat through 132 kV transmission line from India if required.

The NEA is running a campaign to strengthen the transmission and distribution system and expand the infrastructure with short-term and long-term plans to increase the domestic consumption of electricity produced in the country.

MD GHISING Leakage To Single Digit By A Correspondent 23 hours, 20 minutes ago

NRB'S DECISION Surrounding Controversy By A Correspondent 1 day, 2 hours ago