“14 dzongkhags were under lockdown for 14 days and we have started mass screening to determine how to unlock these dzongkhags.” 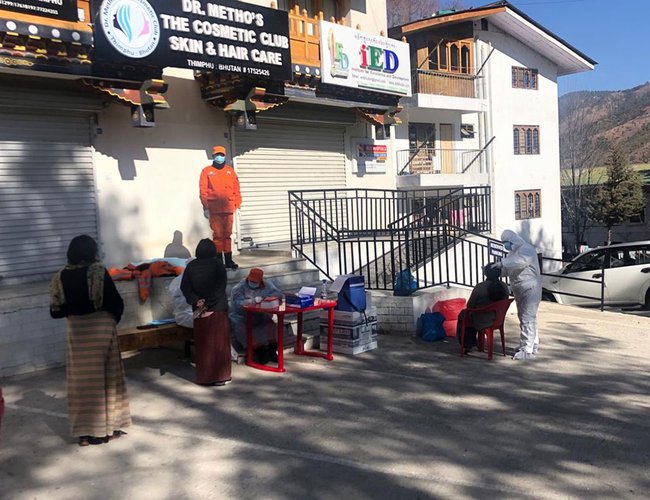 The National Covid-19 Task Force (NC19TF) last night announced that from today residents in Thimphu can move within their mega zones following the timing on their movement cards until February 3.

“However, the people in the red buildings and clusters will be cordoned off for professional management,” NC19TF’s press release stated. The regional and local task forces can decide on relaxing lockdowns based on the situation.Kuensel

Dr Sithar said that they were looking into unlocking the city at the earliest, phase-wise like from within the mega zone to the opening of shops and hotels. “Like in red zones, the cluster-wise approach will be followed where only buildings or areas with virus outbreak will be locked down.”

“14 dzongkhags were under lockdown for 14 days and we have started mass screening to determine how to unlock these dzongkhags.”

The result from the North mega zone was clear but one from Pamtsho, which could not be covered on the first day tested positive the next day.

As to why the virus is spreading despite the lockdown, Dr Sithar Dorjee said that the people exchange their movement cards and those in the same building mingle. “Of the seven buildings with cases, people in four had travel history to Wangdue.”

Of the 119 new positive cases in the last 24 hours, 31 were from the community. Nganglam in Pemagatshel has the most cases from the community with 10 followed by Thimphu with nine. Chukha has six, Samtse has three, Samdrupjongkhar has two and Gelephu in Sarpang has one.

Residents in lower Changzamtog and Changidaphu were informed through the Facebook groups for their zones of Covid-19 test today. As per the earlier notification, movement during testing in the zone is restricted and shops have to remain shut.

According to the NC19TF press release, as of yesterday, Gasa, Haa, Trongsa, Bumthang, Trashigang, Mongar, Trashiyangtse, Lhuentse and Zhemgang are “green dzongkhags”. Paro throm and adjacent gewogs are “yellow areas”. Thimphu throm and adjacent Chang and Kawang gewogs, parts of Sarpang, Samtse, Pemagatshel (Nganglam) and Punakha, most of Wangduephodrang, Chukha (Phuentsholing), Samdrupjongkhar, Tsirang and Dagana are “red areas and dzongkhags”.

The inter-dzongkhag movement from the “green” dzongkhags and areas is allowed but travels from yellow and red dzongkhags and areas will require testing or quarantine as per the decision of local task forces. “For Thimphu, mandatory RT-PCR testing is required for travel.”

With more cases being detected, all drivers ferrying goods have to have a mandatory RT-PCR test with a seven-day validity.

In view of the upcoming Traditional Day of Offering on February 2, local task forces are asked to ensure strict monitoring of gatherings, and other restrictions, as spelt out in the notification issued on January 20.

Since the declaration of “blackout” on January 16 and further extension of lockdown, a total of 116,387 Covid-19 tests were carried out across the country until yesterday. A total of 1,781 cases, of which 403 were in the community, were detected since then.

Meanwhile, the ministry of health established an RT- PCR Laboratory in Wangdue yesterday.