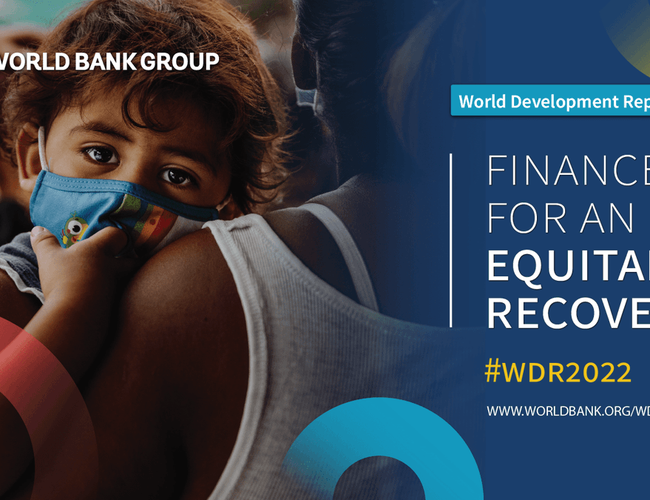 According to World Development Report 2022: Finance for an Equitable Recovery, risks may be hidden because the balance sheets of households, businesses, banks, and governments are tightly interrelated. Today, high levels of non-performing loans and hidden debt impair access to credit, and disproportionately reduce access to finance for low-income households and small businesses.

“The risk is that the economic crisis of inflation and higher interest rates will spread due to financial fragility. Tighter global financial conditions and shallow domestic debt markets in many developing countries are crowding out private investment and dampening the recovery,” said World Bank Group President David Malpass. “It is critical to work toward broad-based access to credit and growth-oriented capital allocation. This would enable smaller and more dynamic firms – and sectors with higher growth potential -- to invest and create jobs.”

The global public health crisis triggered by COVID-19 quickly turned into the largest global economic crisis in more than a century, resulting in major setbacks to growth, increased poverty rates, and widened inequality. In response, governments initiated large and unprecedented emergency support measures, which helped mitigate some of the worst social and economic impacts, and increased sovereign debt levels – already at record highs in many countries before the crisis. The response also exposed several challenges with private debt that now need to be urgently addressed – including a lack of transparency in reporting non-performing loans, delayed management of distressed assets, and tighter or no access to credit for the most vulnerable households and businesses.

The new World Development Report highlights several priority areas for action, including early detection of financial risks. Since few countries have the fiscal space and capacity to address all challenges simultaneously, it outlines how countries can prioritize resources depending on their context.

Surveys of businesses in developing countries during the pandemic found that 46 percent expected to fall into arrears. Loan defaults could now sharply increase, and private debt could quickly become public debt, as governments provide support. Despite the severe contraction in incomes and business revenues resulting from the crisis, the share of non-performing loans remains largely unimpacted and below expectations. However, this may be due to forbearance policies and relaxed accounting standards that are masking significant hidden risks that will become apparent only as support policies are withdrawn.

“Prior to crises, it’s often the things that you don’t see that ultimately get you. There is reason to expect that many vulnerabilities remain hidden,” said Carmen Reinhart, Senior Vice President and Chief Economist of the World Bank Group. “It’s time to prioritize early, tailored action to support a healthy financial system that can provide the credit growth needed to fuel recovery. If we don’t, it is the most vulnerable that would be hit hardest.”

The report also calls for the proactive management of distressed loans. Many households and firms are confronted with unsustainable levels of debt due to lower income and revenue. Effective insolvency mechanisms can help avoid the risk of long-term debt distress and lending to ‘zombie’ firms that undercut economic recovery. Improving insolvency mechanisms, facilitating out-of-court workouts, especially for small businesses, and promoting debt forgiveness can help enable the orderly reduction of private debts.

In low-income countries, dramatically increased levels of sovereign debt need to be proactively managed in an orderly, and timely manner. The historical track record shows that delays in addressing sovereign debt distress are associated with protracted recessions, high inflation, and fewer resources going to essential sectors like health, education, and social safety nets, with a disproportionate impact on the poor.

Finally, it is critical to work toward inclusive access to finance to support the recovery from a historic pandemic. In low-and-middle income countries, 50 percent of households are unable to sustain basic consumption beyond 3 months. The average business reports that they only have cash reserves to cover two months of expenses.

Households and small businesses have been at greatest risk of being cut off from credit, yet access to credit improves the resilience of low-income households and enables small businesses to navigate shutdowns, stay in business, and eventually grow and support the recovery. Digital financial tools and products can play a critical role in assessing borrower risk and providing recourse in the event of default, thus improving management of credit risk, enabling lending, and fostering new economic opportunities.

The policy reforms necessary for achieving an equitable recovery also offer governments and regulators an opportunity and roadmap to accelerate the shift toward a more efficient and sustainable world economy. Climate change is a major source of neglected risk in the world economy. Well-designed crisis response policies and longer-term reforms can encourage capital flows toward greener firms and industries.

Finance Ministry Cut The Budget Of Purchasing Newspapers And Printing Under its Austerity Measures By Agencies 11 hours, 48 minutes ago