With his announcement, learn to live with virus, Boris Johnson has scrapped Covid restrictions showing the way for other countries as well. Badly affected by lockdown and other precautionary measures, Nepal also needs to take such measures to push the economic activities. 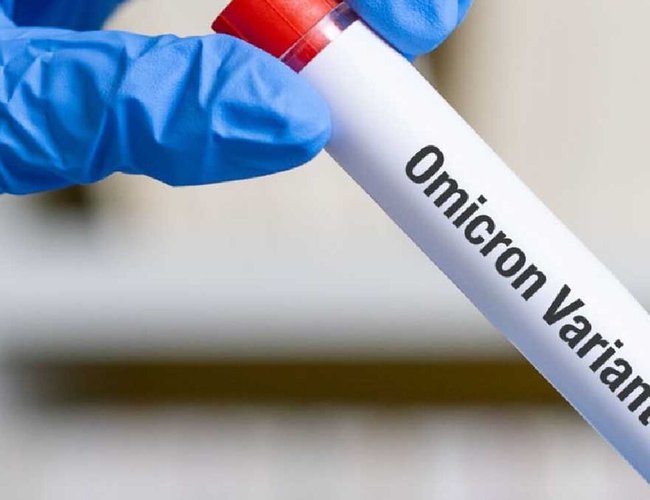 As part of his government's 'Living With Covid' plan, UK Prime Minister Boris Johnson said he would end all coronavirus restrictions in England including mandatory self-isolation for people with Covid-19 and free testing drawing skepticism from some scientists and political opponents.

Although Johnson's plan has sparked alarm that it is premature and will leave the country vulnerable to new viral variants, the government says it has provided more testing than most other countries, and must now curb the cost.

Although China and Hong Kong build isolation units and Europe retains social distancing and vaccine rules, endorsing the complete idea of British Prime Minister moving to repeal any pandemic requirements will not be easy for Nepal. However, it is time to shift the responsibility on public.

Following the easing of restrictions, Nepal needs to lean even more on the rollout of booster vaccines. The government should offer extra booster doses to the most vulnerable, as well as other pharmaceuticals interventions such as antiviral treatments.

As restrictions pose a heavy toll on Nepal’s economy, society, mental wellbeing and on the life chances of children, there is the need to think for a certain way out.

"So let us learn to live with this virus and continue protecting ourselves and others without restricting our freedoms," said the British Prime Minister.

Some surveillance of the coronavirus would continue, allowing for a rapid response to new variants, which could be quickly scaled up but opening economy needs to be priority. Declining death and hospitalization cases due to vaccines and antiviral and lower severity of the Omicron variant give some points to the decision makers. 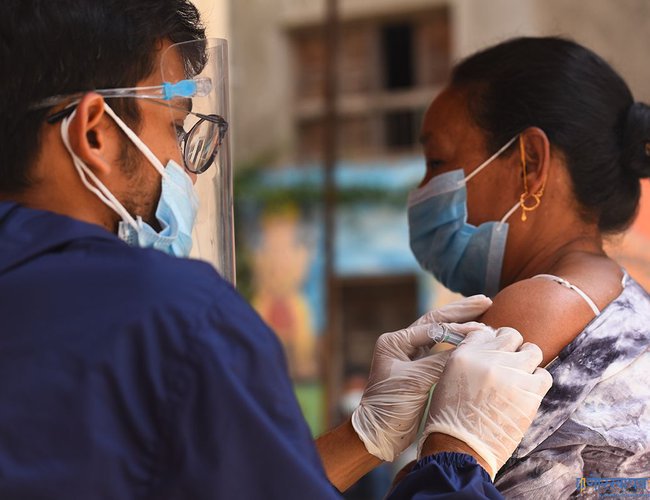 Nepal has acknowledged that the Covid-19 pandemic is now in the community transmission stage. How is this stage defined, and what are its implications? What changes in strategies to contain the spread?

In the third wave of the coronavirus epidemic, Nepal has acknowledged that the disease is now in the community transmission stage. While it is no more than a statement of the obvious, and has little operational implication at this stage of the epidemic, this acknowledgment has attracted attention because this is the first time India has officially done so.

In all regions except the origin of the outbreak, the virus is introduced into the population by travelers. In the initial stages of an epidemic, all further transmissions of the disease can be linked, directly or through a chain, to these travelers. But after some time, as more and more people get infected, they pass on the virus to many more, several of whom are never detected because they might be asymptomatic or did not get tested. But even these undetected cases would have transmitted the disease to others. Very soon, it results in a situation where the chain of infections can no longer be traced to the original travelers, and most of the infections become locally acquired. It is this stage of the epidemic that is classified as one of community transmission.

In simple terms, it is a stage where it becomes difficult to establish the chain of infections, or determine who infected whom. This has implications for deciding containment strategies and response measures to deal with the epidemic.

Community transmission is the final stage of classification of the epidemic on this basis. The World Health Organization (WHO) has three more classifications ahead of community transmission — no active cases, sporadic cases and cluster of cases. If no new cases are detected in 28 days, a country or region is said to have no new active cases. A situation where all the known infections in the previous two weeks can be linked to an imported case is classified as being in the second category.

Nepal had so far been maintaining that the epidemic in the country was in the stage where it was witnessing a cluster of cases. According to the WHO classification, this is the stage where cases detected in the previous two weeks are “predominantly limited to well-defined clusters that are not directly linked to imported cases, but which are all linked by time, geographic location and common exposures”. It is assumed that there are a large number of unidentified cases, but this is still considered a low-risk situation. 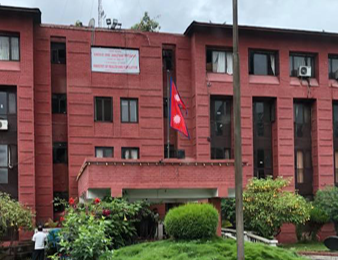 The manner in which the transmissions are happening is key to deciding actions to be taken to contain further spread of the disease. In the initial stage, for example, when only sporadic cases are detected, aggressive testing and contact tracing is supposed to be among the most effective strategies to halt or slow down the spread of the disease. As all direct contacts of an infected person are identified, tested and isolated, the number of virus-carrying people in the population gets reduced significantly, and so does the number of transmissions.

However, such a strategy might not yield much in terms of slowing down the spread in the community transmission stage. In such a situation, it is considered more beneficial to focus attention on measures like hospital management, access to critical care facilities or genomic surveillance.

From the speed at which the Omicron variant has spread, there never was any doubt that community transmission was taking place. Even before Omicron, Nepal was detecting only one of about 30 infections. Now, this ratio would have shot up even further. At this stage of the epidemic, a discussion on community transmission is largely an academic one, and is unlikely to trigger any change in the kind of response measures that are being taken at the central, state or local levels.

Since the current wave is producing mostly mild disease, experts argue that a containment strategy might not yield much, especially since the infection was spreading at such a fast rate, and mainly through asymptomatic cases. Instead, it would be better to focus attention on surveillance, with the objective of keeping an eye on future dangerous mutations.

“We should change the strategy of sample collection for genome sequencing. There is no point in focusing on airports. A close watch should, instead, be kept on clinical samples from the ICU or those with serious symptoms to check if there is further mutation of the SARS-CoV-2 virus and whether it is changing a bit. There is a need to keep an eye on clusters at localities or parties or any gathering in case there is a sudden eruption of cases and also ensure a randomized sampling in large areas,” said experts.

Experts said testing and tracking contacts could not prevent the further spread of the Omicron variant at this stage, even though it was still important to test as many as possible. “But the main focus must be on the hospitalized cases, and those who have developed severe illnesses.”

Several districts have already changed their testing strategy and have not been aggressively doing contact tracing, especially those who are not showing symptoms.

Medical experts argued that the focus must be on saving lives, because such a large number of cases can overwhelm hospitals. “What is known from the current wave is that it has come in a very explosive and tsunami-like proportion. It is more like a cyclone and not a wave. As 80-90% people are asymptomatic, our focus is directed on symptomatic patients. Those who are unvaccinated, or only partially vaccinated, are in the high-risk category. And so are people with chronic underlying diseases like cancer, heart transplantation or lung disease. The focus clearly is to save lives and ensure health systems are prepared.”

In recent times, the novel coronavirus had spread like wildfire in Nepal, especially in the Kathmandu Valley. As the infection rate jumped from 4.4 per cent to 23 per cent in a week's span recently, the epidemiologists had suspected that along with Delta variant, the Omicron strain of coronavirus must have been spreading in Nepal at lightning speed.

Similarly, the World Health Organization (WHO), in its weekly epidemiological report, informed that the COVID-19 cases increased by 55 per cent (15 million) in one week from January 2 to 9. This is the highest number of cases reported worldwide in a single week until now. 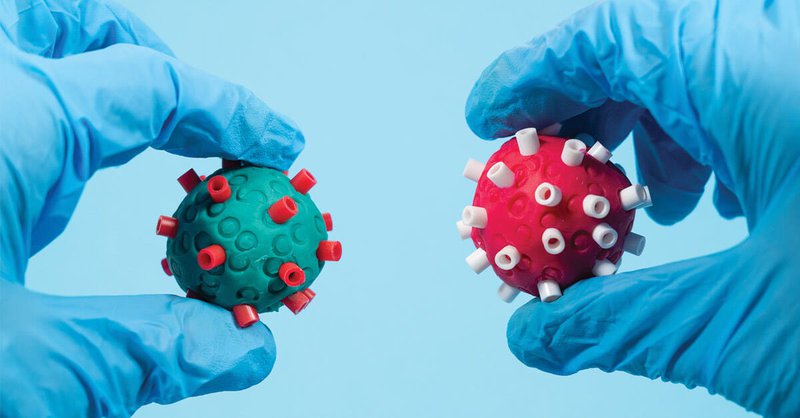 The government's decision to restrict public gatherings and close operation of physical classes in schools and increase surveillance in border areas also hint that the new variant, which is considered to be highly contagious, has spread in the nation.


Meanwhile, the public health experts have said that the Omicron variant is found to be less fatal than other variants of the coronavirus.

During a press briefing, the WHO said that the Omicron was less severe than Delta strain, but is still dangerous to unvaccinated groups. "However, this new strain stands as a danger because many people across the world are yet to be vaccinated," said director general of the WHO Tedros Adhanom Ghebreyesus.
The WHO director general also said that the Omicron variant was rapidly replacing Delta variant in almost all countries and majority of Omicron-infected who have been hospitalized are unvaccinated patients.

Similarly, chief of the Clinical Research Unit of Teku Hospital Dr. Sher Bahadur Pun said that the Omicron strain was spreading in Nepal and its effect could be seen in hospitals. "Lately, there has been an increase in number of patients visiting the hospital with symptoms similar to that of COVID-19," he said.


Dr. Pun said that the symptoms of Omicron were mild and no serious illness was reported among the vaccinated people. "Discomfort and itchy throat, tiredness, headache, muscle pain, slight increase in body temperature, runny or blocked nose are the common symptoms of Omicron infection," he added.


"Although vaccinated people can be infected with the virus, the severity of infection is very low," said Dr. Pun, adding, "As the vaccination campaigns have been running nationwide, we may not face a crisis like we did during the previous waves." 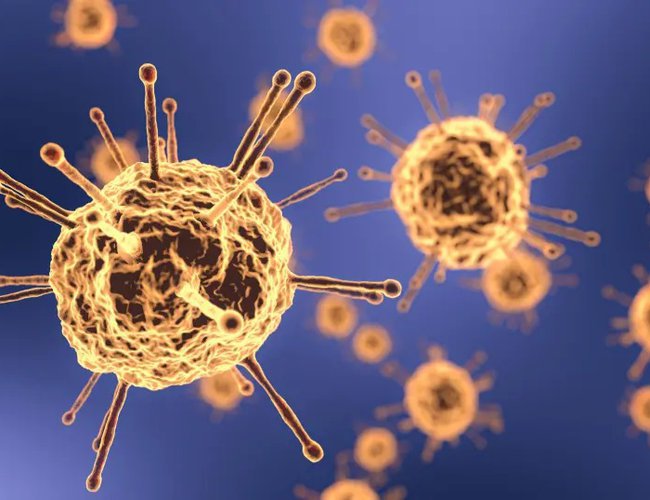 Stating that half of the population is yet to be inoculated, Dr. Pun said that the vaccination campaign should be run effectively and the public should also participate in the campaign to minimize the impact of Omicron in Nepal.
A total of 48.5 per cent of the total population has received the first dose of COVID-19 vaccine and 35. 9 per cent have been inoculated with the full dose.


Meanwhile, Dr. Sangita Mishra, spokesperson for the Ministry of Health and Population (MoHP), said that the government was carrying out the vaccination drive in full fledge to control the spread and severity of Omicron. "I request everyone to follow the health protocols and help the government fight this battle against COVID-19 by participating in the vaccination campaign," she said.

As Omicron has changed the shape of the pandemic, will it end it for good remains to be seen? For Nepal, it is difficult yet to say anything about the future level of pandemic.

COVID-19 Vaccine To All Eligible By A Correspondent 11 months, 1 week ago 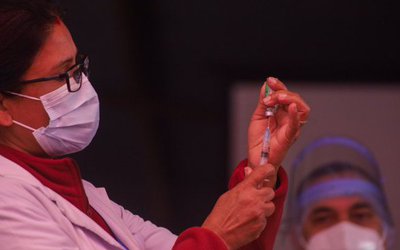 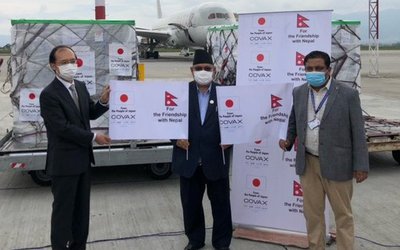 JAPAN’S SUPPORT Friend In Need By A Correspondent 1 year, 5 months ago 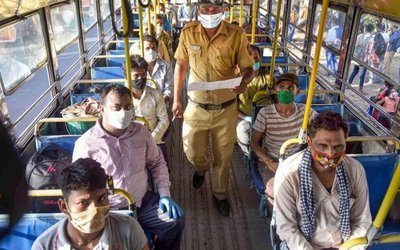