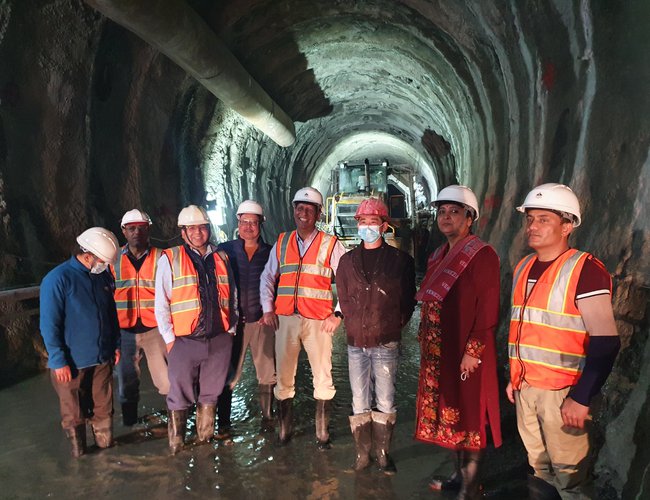 Despite facing server crisis of Covid-19 pandemic followed by health protocols and lockdown, 37 MW Upper Trishuli 3 B Hydropower Project has made a progress completing 58 percent of work.

Managing Director of Trishuli Hydropower Company Limited, the promoter of the project, Mohan Prasad Gautam said that 2865 metres of the main tunnel with a length of 3805 meters has been dug.

"Concreting of structures has started after completion of excavation of surface power house; work is being done with the aim of concreting the first phase by connecting electromechanical equipment and parts by next May," said Gautam.

"As the customs checkpoints with China have not been fully opened yet, the contractor company has not been able to transport the construction equipment and materials in the production and packaging stage to China and bring them to the construction site. We have received information that they will be released from the customs soon."

Work on the 37 MW Upper Trishuli 3B Hydropower Project under construction in Rasuwa and Nuwakot as a part of the People's Hydropower Programme has gained momentum.

The overall physical construction progress of the Upper Trishuli 3B Hydropower Project, which had been hit by the COVID-19 pandemic, has reached 58 per cent so far, according to the Nepal Electricity Authority (NEA).

As per the People's Hydropower Programme (Operation and Management) Procedure, 2075, there is a provision to demand payment only after paying 50 per cent of the remaining amount for physical progress of the project and all the amount agreed to be taken by the shareholders of the founding group of the company.

NEA and Nepal Telecom have 30/30 per cent founder shares in Trishuli Hydropower Company Limited, the promoter of the project.