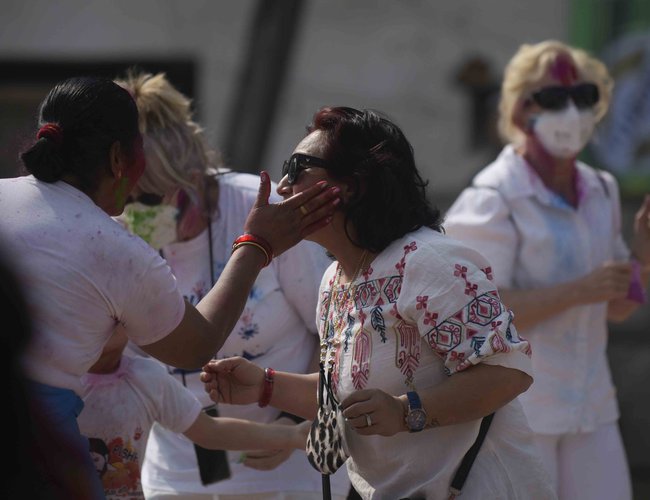 From smearing each other with colours to enjoying a plate of delicious gujiyas together, the festival of Holi ushers in a carnivalesque mood among people of all age groups, every year.

Kathmandu valley and rest of hilly region of Nepal celebrates the Holi festival today. However, the Holi will be celebrated tomorrow in plain areas of Nepal .

The customs and rituals may be different across regions but what unites them is the spirit of this festival of colours.

Holi, also known to the world as the “Festival of Colors” or “Festival of Love,” is one of Nepal’s most auspicious Hindu festivals. It manifests the victory of good over evil and celebrates the divine love of Radha and Krishna.

The two-day Hindu festival originated and is primarily celebrated in the Indian subcontinent. It is held during the full moon day in the Hindu calendar month of Falgun (March). Hence, the celebration of the Holi Festival in Nepal marks the end of the winter and the arrival of spring.

The auspicious occasion of colors is widely celebrated by the majority of all ethnicities in the nation. During this festival, the locals express their blessings and good wishes by throwing dry powder and colored water at each other. Holi has spread to different parts of North America and Europe in the last few years to celebrate love, colors, and recreation.

History and Rituals of the Holi Festival

Holi, also known as “Phagu Purnima,” has become one of the most loved festivals in the Nepalese community. Like many Hindu festivals, Holi has more than one cultural significance.

In India, the tradition centers around the demonic siblings Holika and Hiranyakashipu. It came into practice as a festivity when a devil king Hiranyakashipu plotted to kill his own son Prahlad with the help of his sister Holika. Holika was a recipient of a holy boon, which enabled her to resist the fire. She entered the burning fire with Prahlad in her lap. Prahlad, a true devotee of Lord Vishnu was saved from the accident while Holika was burnt to ashes.

Hence, many people believe the festival was named after Holika. In short, it is the celebration of the triumph of good over evil.

In India’s Braj region, this festival is celebrated to commemorate the divine love of Radha and Krishna. According to the symbolic legend, Krishna had a dark blue skin color as a demon had poisoned him when he was a child. So in his youth, Krishna always worried whether the fair-skinned Radha wouldn’t like him due to his appearance.

Tired of his desperation, Krishna’s mother, Yashoda, asked him to approach Radha and tell her to color his face with some brightly-colored powder. After this, Radha and Krishna became a symbol of divine love. Hence, in this part of India, Holi is celebrated in commemoration of the coloring of Radha and Krishna’s faces.

Whereas in the Nepali context, the colorful festival is a way of expressing gratitude to the Hindu legends and welcoming spring.

How Do You Celebrate Holi in Nepal?

Holi in Nepal is basically a celebration of colors. Hindus around the country mark the festivity by playing with bright-colored powders and lighting bonfires.

Holi is usually celebrated with loved ones, family members, friends, and community members. People wish each other the greetings of Holi by splashing colorful water balloons and colored powders on and over each other.

Basantapur Durbar Square has been the hub for the celebration of Holi in Kathmandu. If you are here around the time, you can choose to participate in the festival.

The celebrations usually start a week before the main day. Holi celebrations in Nepal can be colorful and loud. The crowd is energetic, and the entire scene looks nothing short of a paintball game. One can witness the crowd running around with colorful faces and water balloons.

On this day, people usually dress in plain white clothes to let the vibrant colors sit perfectly on the clothes. As the festival also stands for accepting differences and friendship, many individuals see this as an opportunity to resolve the old arguments, cold relations, and any kind of barriers.

Concerns Regarding the Holi Festival

The Holi festival generally ensures a great time for the people celebrating it. However, it has its shortcomings. The festival is not new to unwanted and sometimes unpleasant incidents. Since the streets are usually crowded during the festival, there are high chances of losing your valuable possessions amongst pickpockets. You should always stay with your loved ones and trusted people at an event like this.

While some individuals will greet you in advance and ask for your consent to participate, there will also be people who will not bother asking. Most people will directly put/throw colors on you, which can be a bothersome experience for some travelers. If you do not favor such incidents, please let the locals know that you are not okay with that kind of treatment.

As much as this is a festival of friendship, love, family, and celebrations, this is not free of other safety concerns. A lot of synthetic colors in the market today are not chemical-free. Besides causing damage to the skin, it can cause various health complications. This is also why many millennials chose not to be a part of the festivals.

Additionally, many young individuals are also looking at the festival through an eco-friendly approach. A lot of people today do not actually want to impose more threats on the environment with the ever-growing climate change issues. The bonfires have also contributed to deforestation issues. Likewise, the extensive use of colors also stagnates the water bodies and ecosystem.

However, if you are willing to see what Holi is all about, be prepared to be soaked in colorful water as you immerse yourself fully in this festival.

In 2022, the auspicious Holi festival will fall on the 17th and 18th of March. If you are eager to be a part of the color euphoria, do match your travel dates, and kindly keep in touch with Nepal Hiking Team. Holi is not only a one-of-a-kind experience but truly a celebration of love and selflessness. It takes you a step closer to building memories lasting an entire lifetime.

While the main festival of colours is officially due in a couple of days, a lot of people in the country have already started indulging in merrymaking.

An ancient Hindu festival, which later became popular among non-Hindu communities as well, Holi heralds the arrival of spring after winter. It signifies the victory of good over evil and is celebrated as a day of spreading happiness and love. The festival is also celebrated as thanksgiving for good harvest.

According to Bhagvata Purana, King Hiranyakashipu--the king of demonic Asuras, who could neither be killed by a man or an animal--grew arrogant and demanded that everybody should worship him as god.

The king's son, Prahlada, disagreed and chose to remain devoted to Vishnu. Hiranyakashipu was infuriated and subjected his son to cruel punishments. Finally, Holika, the king's sister, tricked him into sitting on a pyre with her. While Holika protected herself with a cloak, Prahlada remained exposed. As the fire blazed, the cloak flew from Holika's body and encased Prahlada, thus saving his life.

Later, Vishnu appeared in the avatar of Narsimha, half man and half lion, and killed the king. This is why Holi begins with the Holika bonfire, which marks the end of evil.

According to another legend, Lord Krishna had developed a characteristic blue skin colour after Putana, a demon, poisoned him with her breast milk. Krishna worried if the fair-skinned Radha and her companions would ever like him because of his skin colour. Krishna's mother then asked him to approach Radha and smear her face with any colour he wanted. The playful colouring gradually evolved as a tradition and later, as a festival observed as Holi, in the Braj region of India.

Holi celebrations start on the night before Holi with Holika Dahan, where people perform rituals in front of a bonfire, praying for their inner evil to be destroyed, just as Holika was killed in fire.

The carnival of colours begins the next morning, where people come out on the streets to play with colours, and drench each other in coloured water through water guns or balloons.

Interestingly, different regions in India observe varied customs on this day. In West Bengal and Assam, for instance, Holi is known as Basanta Utsav or spring festival.

A popular form of Holi, called Lathmar Holi is celebrated in Barsana, a town near Mathura, in Uttar Pradesh, where women beat up men with sticks, as those on the sidelines chant ''Sri Radhey'' or ''Sri Krishna.''

Again, in Maharashtra, it is the time of Matki Phod (breaking the pot). Men climb on top of each other to form a human pyramid up to the height from which a pot buttermilk is hung. The one who breaks the pot is named the Holi King of the year.

The customs and rituals may be different across regions but what unites them is the spirit of this festival of colours.