Resisting verbal and diplomatic pressure from China, Nepal ratified the US-backed MCC agreement. Both the neighbors are now back to diplomacy to bury differences 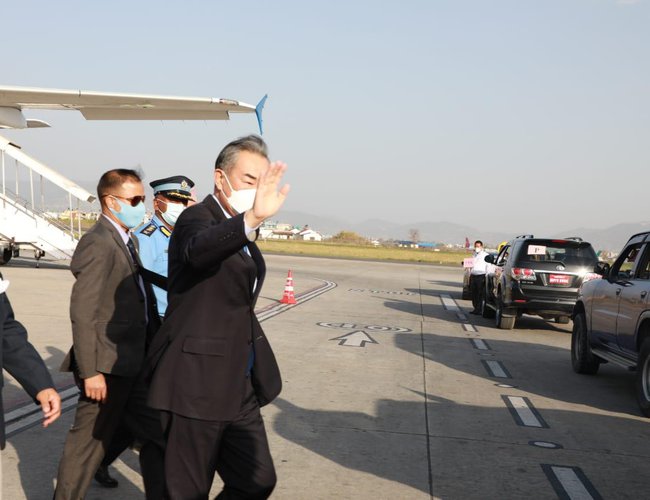 By defying the Chinese bully ratifying the US-backed MCC agreement, Nepal plays a hardball. Given its own geo-strategic position, Nepal and China are on a course to diffuse the tensions on bilateral relations.

Along with mobilizing official media to warn and threaten Nepal not to go close with America, China is also making effort to woo Nepal through its mandarin foreign office jar. As China is reportedly sending a foreign minister to pay a visit to Nepal, Nepalese high officials are also using the language to woo China.

After the fall of the traditional Hindu monarchy, which China regarded as a neutral friend to defend its interest, China finds a trustworthy ally just a year after with the upsurge of communist parties and their government in Nepal.

To burry the differences with China, the government led by Prime Minister Sher Bahadur Deuba has taken some verbal pronouncement passing a cabinet resolution not to allow Nepalese soil to use against the neighbors.

Along with cabinet-level, he also expressed his government's commitment publicly. “Nepal remaining between the two giant nations: China and India, has the policy of seeking the support of both neighbors for its development endeavors and establishing balanced and friendly relations with them and it is the need too.

Addressing the program in Parsa, Prime Minister Deuba has said the Millennium Challenge Corporation (MCC) compact which was recently ratified by the House would prove its significance in terms of the development of Nepal.

As he explained, the MCC is a grant from the US Government and the country would see a good pace of development ahead if it was fully utilized.

In his address to a program organized by the Nepali Congress (NC), Parsa in Birgunj, he expressed his hope that the proper utilization of the aid would provide a ground for other prosperous nations in the world too for investing and helping us fight unemployment, poverty and economic backwardness.

As prime Minister Deuba, President Bidya Devi Bhandari is also boasting the importance of Nepal’s relations with China saying that Nepal and China share a bond of friendship enriched by our common heritage of Buddhist civilization.

“We have deep cultural links across the Himalayas. It goes without saying that we have kept this amity for centuries because of Nepal-China relations are founded on time-tested mutual trust,” said President Bhandari in an interview with Chinese Daily Global Times

“While China has generously supported Nepal's development efforts, Nepal has always remained committed to the one-China principle and advocated in history for China's rightful place in the United Nations. Our mutual trust keeps our relations largely problem-free today. Our areas of mutual cooperation are ever-expanding. We need to continue to work for taking this friendship to new heights. I see innumerable possibilities in Nepal-China relations.”

President Bhandari said that Chinese President Xi’s visit to Nepal in 2019 was memorable. “I have fond memories of His Excellency Xi Jinping's state visit to Nepal in 2019. It proved historic for several reasons. The visit was the first in 23 years by the Head of the State of China. We enhanced our relations to the level of strategic partnership for development. We had delegation-level talks where we looked into the entire spectrum of our bilateral cooperation. So, the visit was highly successful. To follow up on the agreements that we reached then, our governments are working hard and many high-level delegations have visited our two countries. Overall, I am satisfied with the progress of Nepal-China relations,” said to Chinese state media Global Times.

Despite taking diplomatic moves to mend the differences over Nepal’s choice to take western aid, it will take a few more times to restore the relations between the two countries. As Nepal and China share geography, both the countries have no option other than to understand each other’s concerns and live on them.