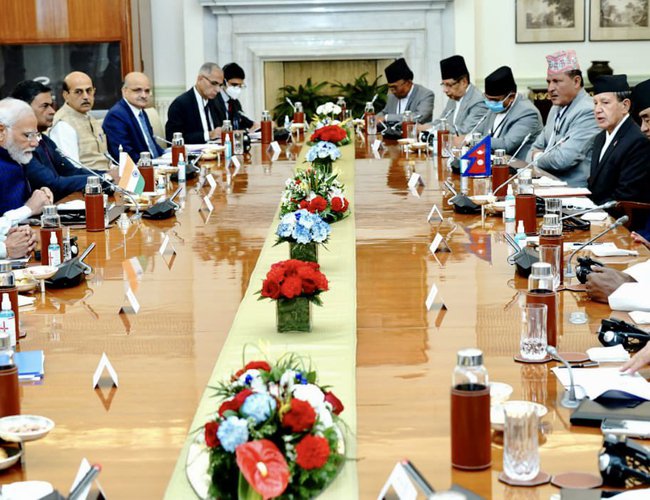 The Prime Minister of India responded positively to various proposals on development and economic partnership between Nepal and India.

Similarly, the two Prime Ministers welcomed the recent signing of an MoU on supply of Urea and DAP from India to Nepal on G-to-G arrangement. Prime Minister Deuba requested forthe supply of first consignment of 150,000 metric tons of fertilizers to Nepal before the upcoming monsoon season.

Prime Minister Deuba thanked Prime Minister Modi for India’s support of Covid-19 vaccines, medicines, liquid oxygen and other medical logistics to Nepal. He alsoexpressed Nepal’s gratitude for India’s support to post-earthquake reconstruction. Matters such as trade and transit, culture and tourism, cooperation in agriculture, including the supply of Murrah buffalos for breeding purpose and sugarcane germplasm, and various other bilateral matters of mutual interests and benefits also figured during the meeting.

The two sides also agreed to conclude the revised Transit Treaty, which will facilitate the operationalization of rail, cargo, transhipment, private operators, inland waterways and access to additional ports. The two sides also discussed the construction of ICP and a dry port in Chandani-Dodhara.

On the occasion, a Joint Vision Statement on Power Sector Cooperation was issued. The Statement covers bilateral cooperation in production, transmission and cross-border trading of hydropower.Indian side shared that India would purchase hydropower from Nepal for which clearance process has already started.The two Prime Ministers noted that some landmark projects such as Pancheshwar Hydropower Project have great potentials in accelerating economic and development partnership. Both sides emphasized the need of early finalization of DPR of the Pancheswar Hydropower Project which will lead to execution of the project for mutual benefit.

During the occasion, the two Prime Ministers jointly flagged off the inaugural passenger railway service between Jayanagar and Kurtha, which was constructed under Indian assistance.

They also inaugurated 90-KM long 132 KVDC Solu Corridor Transmission Line Project built under Indian Line of Credit. The Prime Ministers witnessed the progress in construction of 132 health facilities in 10 districts of Nepal and also launched the operation of RuPAY cards in Nepal.

On the occasion, India requested Nepal to propose new proposals to utilize the unspent amount of USD 500 Million under LOC-IV offer to Nepal.

The two Prime Ministers also witnessed the signing and handover of the following documents:

I MOU for Enhancing Technical Cooperation in Railway Sector;

Earlier this morning, the Rt. Hon Prime Minister laid wreath at the Samadhi of Mahatma Gandhi at Rajghat and signed the visitor’s book expressing his profound reverence to the late Mahatma.

Earlier in the morning,His Excellency Shri Ajit Doval, National Security Advisor of India called on the Rt. Hon. Prime Minister. Matters of bilateral interests were discussed on the occasion.

Later in the afternoon today, the Prime Minister also addressed a gathering of business community in New Delhi organized by Confederation of Indian Industry (CII) and called upon them to invest in Nepal’s productive sectors, particularly in hydropower. A business delegation consisting representatives of private sector apex bodies from Nepal, among others, accompanied the Rt. Hon. Prime Minister.

The Prime Minister is scheduled to visit Vanarasi tomorrow morning and return to Kathmandu in the afternoon.