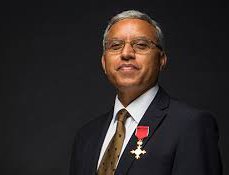 A Global Annual Prize named after Professor Surya P. Subedi QC has been established at the Wilberforce Institute for the Study of Slavery and Emancipation (WISE) of the University of Hull, England. The Prize is designed to promote the advancement of scholarship in the study of modern forms of slavery, emancipation and the protection of human dignity for the benefit of the public.

The Prize will open to any graduate in law, politics, social science, and humanities from around the world regardless of their nationality. The award will focus on enhancing the employability and profile of early-career academics and will therefore be restricted to candidates below the age of 40 at the time of submission.

Professor Subedi said that he was honoured and delighted that the Prize in his name was established at the Wilberforce Institute, which is named after a famous national figure William Wilberforce of Great Britain who led the campaign for the abolition of slavery. The campaign led to the Slavery Abolition Act 1833, which abolished slavery in most of the British Empire.

Professor Trevor Burnard, Director of the University of Hull’s Wilberforce Institute for the Study of Slavery and Emancipation said: “Professor Subedi is a world-renowned scholar and a champion of human rights. Through his work as a barrister, and numerous high-level positions in governments and national and international organisations, he works incredibly hard to make a difference to the real life of people around the world.”

Professor Subedi obtained his LLM with Distinction at the University of Hull in 1988 and returned to Hull to join its law faculty as a lecturer in 1993 after completing his DPhil (PhD) at Oxford. He became Professor of Law at Hull in 1999. He was awarded the highest accolade – the degree of Doctor of Laws honoris causa - by Hull University in 2020 in recognition of his accomplishments in the fields of international law and human rights.

Supporting Nepal Is A Priority For The US: USAID Administrator Samantha Power By Agencies 1 hour, 46 minutes ago