It all started back in the mid-1960s with Dr Hari Man Shrestha’s PhD thesis at Moscow Energy Institute (incidentally a first technical PhD in Nepal and incidentally where I too a decade later ended up studying under the same grand old man of Soviet hydropower Prof Jaffar Omarovitich Seifulla) where he carried out the seminal ball-park estimate of Nepal’s theoretical hydropower potential putting it at 83,000 MW. 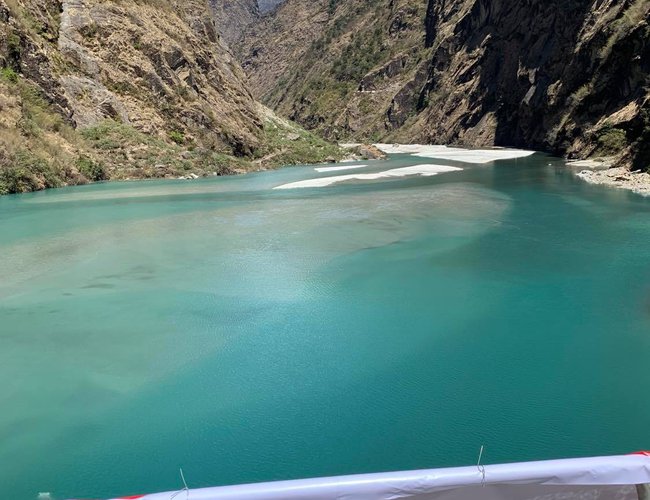 Self-induced hypnosis can lead one to wallow in an illusory world completely cut off from ground reality. Nowhere is this truer than in Nepal’s water management. Starting roughly from Panchayat’s second decade in the early 1970s, the refrain “Nepal is rich in water resources, second only to Brazil!” has infected the minds of all political leaders, senior bureaucrats and even journalists who have failed to maintain a healthy dose of skepticism. This myth (no Brazilian water scientist I have known has said they are numero-uno!) has distorted national, local and even international development policy and led to planning blindness that has consistently failed to see real problems on the ground.

It all started back in the mid-1960s with Dr. Hari Man Shrestha’s Ph.D. thesis at Moscow Energy Institute (incidentally a first technical Ph.D. in Nepal and incidentally where I too a decade later ended up studying under the same grand old man of Soviet hydropower Prof Jaffar Omarovitich Seifulla) where he carried out the seminal ball-park estimate of Nepal’s theoretical hydropower potential putting it at 83,000 MW. Translated into a per square kilometer index, and given both Nepal’s steep terrain as well as heavy monsoon downpour, it does unsurprisingly turn out to be among the highest in the world. So far so good. The problem began when this was translated into policy language in the context of the first OPEC oil shock of the early 1970s: akin to Arab Sheikhs with their petro-dollars, Nepali policymakers began to dream of wallowing in hydro-dollars by exporting hydroelectricity to India!

It has never occurred to them that India’s strategic interest is in stored water for irrigation and not electricity; that even with electricity, it is seen as a strategic industrial input to be had at the lowest price possible, not a market resource capable of earning much profit at all. The other negative consequence has been the hegemony of hydropower in the Ministry of Water Resources in its various avatars. Even its irrigation department has been unable to bring water management to the policy forefront. The irrigation policy of 2003 (introduced by me as water resources minister) spelled out the need to measure progress in irrigation by the volume of water provided to irrigate the fields of farmers and the amount of extra crops grown by the farmers because of it. Unfortunately, the construction-focused hydrocracy overturned that policy a decade later to business-as-usual, measuring irrigation progress in terms of the volume of construction contracts executed.

As the blistering pre-monsoon, dry season approaches, obligatory pictures of water pots in front of dry standposts grace the front pages of national dailies, to disappear with the onset of the monsoon only to reappear a year later!Springs are drying across the Himalayas, Nepal included, making village life near impossible. There is a devastating negative cycle of water shortages, outmigration to labour markets in cities and the Gulf, the decline in maintenance of local recharge structures, more water shortage and more outmigration with local agriculture decline and growing import of food and vegetables thrown into the mal-development mess.

There is a knee jerk reaction blaming climate change for this, reminiscent of THED (the now-debunked theory of Himalayan environmental degradation) where the “poor and fecund Nepali farmers are migrating uphill due to population pressure, cutting more trees in fragile hillslopes and causing more landslides and flooding in Bangladesh”. For one, when faced with difficulties of surviving in hill hamlets, Nepali farmers do not go uphill cutting more trees but downhill to the cities in the plains to eke out a living as wage labourers. For another, policy measures such as community forestry and community electricity have seen more forest cover in Nepal in recent decades than ever before.

This is not to downplay the impending impact of climate change which will in all probability exacerbate the problem in the decades ahead. On the contrary, blaming climate change allows easy escaping of responsibility for here-and-now mal-development drivers that have had more serious and significant impacts on springs and their drying out. Field-based research points not so much to climate change or attendant weather anomalies as to bad development practices (and earthquakes, although many but not all such springs have come back to life as groundwater reclaims its disturbed flow pattern) being the primary drivers of springs drying out.

The major culprit is rampant uncontrolled technology of deep well boring and excessive pumping in growing settlements in the lower regions. With no effort at groundwater recharge, indeed demise of traditional recharge structures such as recharge ponds including buffalo wallowing ones with a decline in livestock keeping, water tables are going down at an alarming rate, leading to self-destructive competitive drilling. The proliferation of hilltop resorts and their resorting to deep drilling (east of Kathmandu in Kavre, one such hilltop resort has drilled 350 meters to pump water) is thus drying out all-natural springs in between!

Other mal-development drivers behind the drying up of springs are: bulldozing badly designed roads on fragile hill slopes, thus destroying natural drainage channels and recharge pathways; outmigration resulting in giving up on hill agriculture and livestock keeping, including non-upkeep of terrace fields and buffalo wallowing ponds that aided recharge; use of PVC pipes and electric motors to over-pump traditional spring wells; and changing social mores that no longer consider water stored overnight in tanks as impure and not done, thus leading to overconsumption and thus misuse.

The country is currently in the throes of campaigning for elections to local bodies. Even though lack of livelihood feasibility in hill agriculture is leading to its further decline with springs drying – and these are serious local issues – baring few non-party independent candidates, sadly no major political party has this crisis and the need for spring recharge efforts on their campaign agenda. On the contrary, theirs is the Sarah Palin approach: “Drill, Baby, Drill!” for more deep tube wells.

It is with this context in mind that a two-day South Asian Drought Workshop was organized in Dhulikhel last week by Kathmandu Institute of Applied Sciences together with Nagoya, Sikkim, and Khulna universities as well as other Nepali institutions. Extended periods of drought and water scarcity are a natural eco-hydro-meteorological reality for much of South Asia which is a semi-arid region with four months of monsoon floods and eight months of drought. A major portion of the discussions centered around the just completed research on drought monitoring by remote sensing, a very useful technology limited, however, by the cost of getting high-resolution data. It was nonetheless pointed out by Nagoya University emeritus professor Yashushi Yamaguchi that, while satellites can provide accurate measurements, they can neither predict drought nor provide input for policymaking without good interpretive models.

This important point on the interface between high science and society requires water scientists to step out of their comfort zone and interact with local governments to see if their science can solve the specific water management problems faced by local officials. This also points to the need for a balance between high “eagle’s eye” science with ground-truthing “toad’s eye” science to make for local policy relevance.

Given that climate change is a problem created by the energy sector with societies the world over feeling its impact through the water sector, addressing Nepal’s growing water scarcity at the local level requires a shift to the local definition of the problems and the local relevance of proffered solutions. This is especially true in a socially and hydro-ecologically diverse country like Nepal.