Local Elections Held Peacefully With Some Sporadic Incidents Of Violence

Local Elections Held Peacefully With Some Sporadic Incidents Of Violence 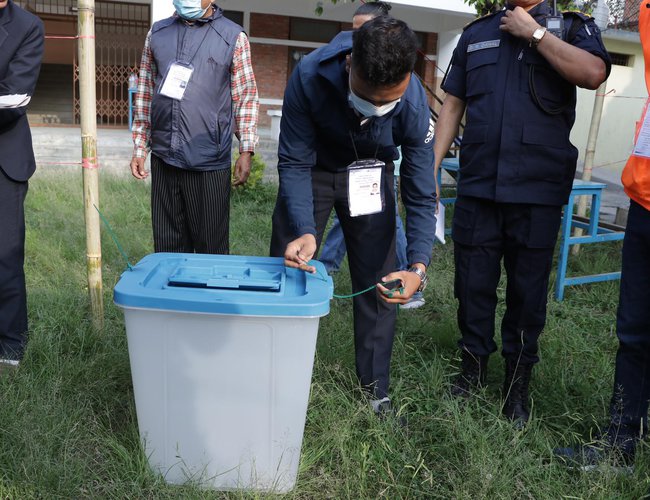 The local level election conducted in a single phase today from 7 am to 5 pm has ended peacefully except for a few incidents of clashes.

The commissioner said that the Commission expects that the total turnout will be at least 65 per cent.

The poll to elect new leadership at 753 local levels across the country went successfully.

According to Commission, 55 per cent of voting was cased till 4 pm in the ongoing local level election, according to the preliminary data provided by the Election Commission, Nepal.

The Commission said that the number of votes was cast from 7 am to 5 pm.

Commission spokesperson and joint secretary Shaligram Sharma Poudel said that the polling was peaceful and encouraging except for minor incidents.

Election commissioner Ishwari Prasad Paudyal viewed the poll as normal, but it could not be termed very exciting.

Commissioner Paudel said, "We felt a lack of security in some places. This was not the situation in the local poll held in 2017 because then the poll was held in three phases. We have received information about the poll being disrupted at different places, and as per the information received till 2:30 pm, voting has stalled at 39 places. It may have resumed in some places."

The voting could go till 8-9 pm if the voters enter the polling centers before 5 pm and wait for their turn inside, said commissioner Paudyal.

US Under Secretary Nuland Arrived In Kathmandu By NEW SPOTLIGHT ONLINE 4 hours, 9 minutes ago

Nepal Has Huge Potential As A Producer Of Green Energy: British Ambassador Pollitt By NEW SPOTLIGHT ONLINE 16 hours, 6 minutes ago