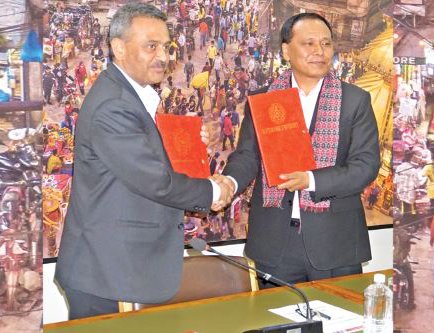 Vice-Chancellor of KU Prof. Dr Bhola Thapa and Managing Director of NEA Kul Man Ghising signed an MoU at a function in Dhulikhel on Friday.

The agreement has been signed between the two organisations for the promotion of green hydrogen technology by developing knowledge, expertise and manpower related to the interest of the NEA and the government, said Biraj Singh Thapa, assistant professor and chief of Green Hydrogen Lab of the KU.

Similarly, the university will have to conduct three postgraduate and doctoral programmes in Nepal using green hydrogen technology.

The agreement between the KU and the NEA will be implemented over the next five years, the university said.

The NEA will provide Rs. 50 million for expertise related to green hydrogen, project design and operation of educational programmes.

The agreement included that both sides will conduct research programmes on a sampling of green hydrogen technology, use of hydrogen technology to improve the quality of the grid, energy storage during winter and capacity building for proper utilisation of hydropower in Nepal.

Speaking on the occasion, MD Ghising said that Nepal would reach the position of importing less electricity and exporting more electricity in the fiscal year 2023/24.

He said that Nepal aims to become self-reliant in hydropower generation by the end of the fiscal year 2024/25.

Ghising said that around 50 to 60 per cent of electricity would be surplus in the rainy season after becoming self-reliant on electricity from 2024/25. Vice-Chancellor Thapa said that cooperation programmes have been initiated with the NEA on the use of wasted hydropower in Nepal in the future.

Stating that water is like white gold, he said that the KU has been advocating in various fields for its use by producing green hydrogen from Nepal's electricity.

Thapa said that the KU would focus on the implementation of green hydrogen production and various studies that could produce urea in Nepal through the use of hydrogen.

The Kathmandu University has been conducting research on green hydrogen production in Nepal by establishing Green Hydrogen Lab reports The Rising Nepal.

Kathmandu’s Waster Can Generate 342 Kilolitres Of Energy By Agencies 7 hours, 31 minutes ago

JP Morgan Warns Of $380 Oil After Price Cap On Russian Oil By Agencies 12 hours, 29 minutes ago