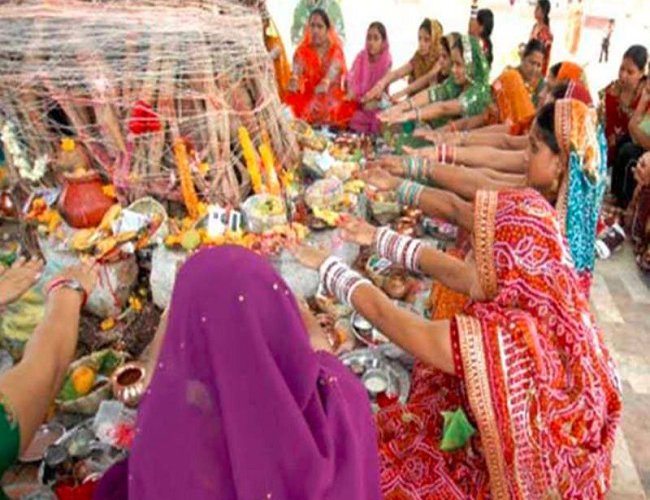 Every year Hindu women across the India and Mithil and other parts of Nepal observe a fast on the occasion of Vat Savitri Puja for the well being of their husbands. According to the Hindu calender, it is celebrated on the Vaishak Vaidya Chaturdashi Amavasya (no moon night), every year.

The Vat Savitri Vrat day is celebrated to remember the bravery of Savitri who fought with Yamraj(the deity of death) to bring her husband Satyavan back to life. Hence, on this day women observe fast and pray to Vat Savitri to bless their husbands with long life and health.

Though in North India the fast is observed on Amavasya, in South India, the same festival is celebrated on Purnima (Full Moon Day) in the month of Vaishakh.

After a dormancy of many years, king Asvapati finally gets blessed with his first child, a little princess, Savitri. Savitri was a beautiful and pure princess. After the princess grows into a young woman, Savitri's father, asked her to choose a groom on her own.

This takes Savitri on a pilgrimage, where she meets Satyavan, the son of blind King Dyumatsena, who stays in the forest. Post returning from the pilgrimage, Savitri told her father about her decision, which makes her father unhappy, as Satyavan was cursed to die after a year of his marriage.

Despite all the rebels, Savitri married Satvayan, and they both live a happy life together until three days before their first marriage anniversary. Looking at the approaching death of her husband Savitri pledges to fast, and pray to gods for her husband's well being.

Although on the day of first anniversary, Satavyan died in the lap of Savitri, under a Banyan tree. But when the god of death, Yamaraj arrives to take Satvyan's soul, Savitri followed him.

This makes the Yamaraj puzzled as a dead man can't reproduce, and impressed by her wit Yamaraj grants her another boon, and this time he does not keep any conditions in front of her, therefore, Savitri asked for the life of her husband. Yamaraj grants her the wish and Savitri and Satavyan live together happily ever after.

Taking part in this festival requires one to follow a number of rituals and practices. Hindu married women observe the various rituals. They wake up early in the morning and take a bath to wear new clothes. They also wear new ornaments and apply vermilion on their forehead. Then they offer rice, wet pulses, lemon, banana and other fruits as bhog. The women also observe fast for the whole day. After, the puja is over, they consume this bhog. Moreover, bowing low in front of their respective husband is also an integral part of the rituals of this festival.

The Vat Savitri Puja is all set to be celebrated on June 3rd, this year.

Most of the festivals in Amanta and Purnimanta lunar calendar fall on the same day. Purnimanta calendar is followed in North Indian states, mainly in Uttar Pradesh, Madhya Pradesh, Bihar, Punjab and Haryana and Nepal.

According to legend great Savitri tricked Lord Yama, the lord of death, and compelled Him to return the life of her husband Satyawan. Hence Married women observe Vat Savitri Vrat for well-being and long life of their husband.