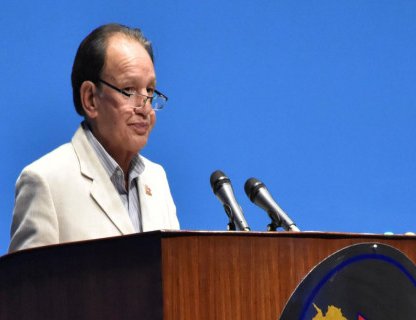 Minister for Foreign Affairs, Dr. Narayan Khadka, has ruled out the possibility of Nepal’s involvement in the State Partnership Program of the United States of America.

In his address to a meeting of the International Relations Committee, House of Representatives, today, the Foreign Minister said the Prime Minister had already declared that the SPP was not in the interest and welfare of Nepal and it was not acceptable for Nepal in the changing context.

In his response to lawmakers’ queries, he said, “The matter is already a closed chapter with the Nepali Army (NA) clarifying it. Thus, it is not necessary to bring the topic into a discourse again.”

According to the Minister, it is not possible for Nepal to be part of any military alliance as it is highly aware of its geographical position and the sensitiveness of its neighbouring country.

Responding to lawmakers’ query about Prime Minister Sher Bahadur Deuba's visit planned for the USA, he said the final decision in regard to it is still awaited.

“The head of the government’s foreign visit is customary,” he added.

Former Prime Minister and committee member Madhav Kumar Nepal said the government has already clarified its position in regard to SPP and during his visit with the Prime Minister, the latter assured that no agreement capable of hurting the national interest would be entertained.

The leader utilised the forum to stress resisting undue pressure and persuasion from anyone else for unjust agreement and said the party was always committed to the issues of nationality.

Former Deputy Prime Minister and committee member Dr. Bhim Rawal demanded the government further clarify its position in regard to SPP and write a letter to the US government stating that Nepal would not be its part. He also sought to form a committee to probe the matter.

Likewise, former Deputy Prime Minister and committee member Sujata Koirala said the government has already clarified the matter and it is no more necessary to discuss the matter ahead while former Foreign Minister Pradeep Kumar Gyawali demanded that the government should clarify the letter said to have been written by it in regard with SPP, and implement a balanced foreign policy.

According to committee President Pabitra Niraula ( Kharel), the meeting decided to seek the official opinion of the government about the issues made public in regard to SPP, direct the Ministry of Foreign Affairs to apprise the US government that it would not be part of the ‘Indo Pacific Strategy’, direct the government not to entertain any document or activities capable of sparking controversies during the Prime Minister’s USA visit

More, the meeting agreed to write the government for providing related letters or documents exchanged by the Ministry of Defense and Ministry of Foreign Affairs and the Nepali Army with the USA within the next seven days reports RSS.