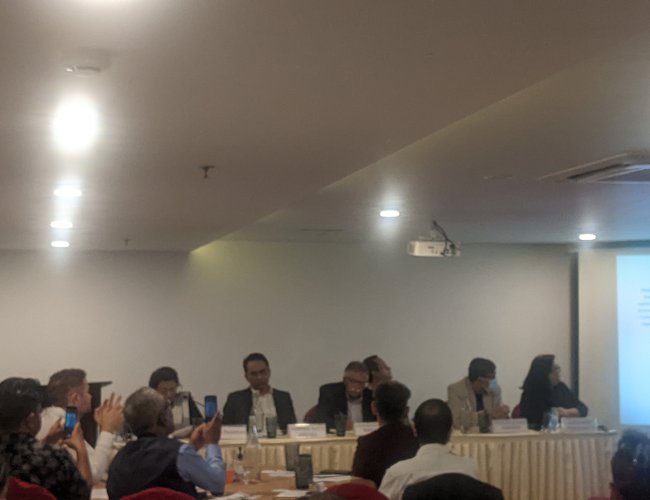 Opening the programme, Richard Howard, Acting UN Resident Coordinator, Office for Nepal began by emphasizing on making the upcoming LDC graduation sustainable. He said," We as UN system can work together with government to make a smooth and sustainable transition from Nepal's LDC category."

Making a presentation of the findings of the ESCAP flagship report "Economic and Social Survey of Asia and the Pacific 2022", Kiatkanid Pongpanich from ESCAP, said, "Inequalities have always existed but the pandemic made them worse. The pandemic has badly affected around 85 million individuals, with vulnerable sectors being the most seriously affected."

She pointed out that fiscal policy can help reduce inequality but it largely depends upon how the polices are framed. For example, 20-40% spending on health sector among developing counties are found to have been wasted via different means.

Paras Kharel, Research Director at SAWTEE brought some perspectives in Nepal's development challenges in the dialogue. "Social protection schemes have surged but it has not been targeted well" he said.

He argued that expenditure efficiency is a highly neglected area that deserves urgent attention and can yield further fiscal space. He pointed out that public debt to GDP ratio currently has already crossed the target set under SDGs for 2030.

Dr. Shrestha mentioned three major challenges in the macroeconomic front: External sector stability, Inflation, and Liquidity crisis. He stated that the next monetary policy should take these three issues into consideration.

Dr. Bina Pradhan, Senior Feminist Economist, explored on root cause of inequalities and said that," Care sector is a huge sector not just in Nepal but in whole South Asia. Care sector occupies almost 32% of Nepalese economy. So it should be addressed especially from the point of human welfare." She shared that care economy shouldn't be missed when we talk about care economy.

Dr. Bishwo Nath Poudel, Vice Chairman of National Planning Commission shared that the tax and transfers is not a good measure to reduce inequality even though it has reduced inequality in developed countries. He also emphasized on the idea that it is better to target growth with jobs rather than jobless growth.

Dr. Poudel highlighted the increased access to finance in Nepal and said that,"751 out of 753 local bodies have commercial banks now. A lot of effort has been made in bringing this success."

In his closing remarks, Dr. Jagadish Chandra Pokharel, Chairman, Nepal Institute for Urban and Regional Studies (NIURS) who moderated the dialogue noted that it will be interesting to see how digitalization has affected service delivery and economic performance. Additionally, he stated that it would be intriguing to see the results of the report in the manifesto of the upcoming candidates for provincial and national level elections.

The dialogue was attended by representatives from NPC, policymakers, researchers, and experts on the topic.