If climate change is such an existential threat to humanity, why is it that we limit concerns about it to one week of COP discussions per year? And for the rest of the year, why is it confined to academic debates only within the UN IPCC scientific crowd? 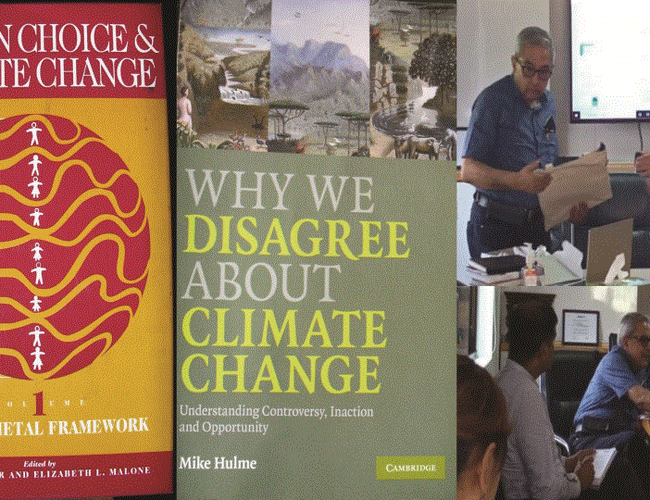 Concerns are growing about climate change impacts but they are not anywhere near the required level of worry either nationally or globally. An indicator of this anxiety was, in the last two weeks, Water Aid Nepal inviting me to discuss its implications for their work in the years ahead, and ICIMOD launching its new springshed initiative to tackle the scourge of springs drying across the Hindukush-Himalaya. Research of the last decade and a half by Nepal Water Conservation Foundation has found ample instance of this slow cancer decimating hill life and its agricultural base; but climate change, while sure to exacerbate the malaise in the decades ahead, is not the primary driver behind this catastrophe.

The primary culprit behind springs dryingis mal-development: misuse of seductive new technologies of electrical and diesel pumping, leading to wanton over-pumping way beyond natural recharge that maintained the overall water balance; ease of transporting water through difficult terrain beyond the springshed with PVC pipes; gouging of fragile hill sides and their natural water channels with badly constructed hill roads dubbed “bulldozer terrorism” by villagers that also contribute to increasing landslides; outmigration of able-bodied youth leading to precipitous decline in livestock keeping as well as hill agriculture and, as a devastating corollary, the neglect of buffalo-wallowing ponds that provided groundwater recharge; as well as the shift from dryland crops to high water consuming vegetables for export – requiring even more pumping of groundwater. If these drivers of mal-development are not addressed and rectified, climate change impacts in the decades ahead will be even more severe than they need be.

What the climate change debate is doing is exposing uncomfortable truths about development as propagandized and practiced in Nepal’s case over the last century, but globally since the Industrial Revolution. It is also revealing societal complexities and institutional weaknesses that are not at all amenable to easy fixes by technical expertise or conventional development interventions. Indeed, they are more part of the problem than potential solutions, especially when climate change is used as a blanket cover explanation to ignore or even hide mal-development drivers, allowing politicians North and South to look good speechifying about it while not having to do anything concrete during their short term in office.

If climate change is such an existential threat to humanity, why is it that we limit concerns about it to one week of COP discussions per year? And for the rest of the year, why is it confined to academic debates only within the UN IPCC scientific crowd? Even worse, why does the international development industry try to look even better than the politicians funding them by forcing every size of development foot into one-size climate change shoe, ignoring any self-reflection as to why their development experiments have often failed badly over the last three-quarters of a century? As a wry Nepali expression has it: “My buffalo did not give milk this morning: it must be climate change!” More likely, you probably did not give it enough fodder or water; but the climate change excuse sure helps you assuage your conscience. 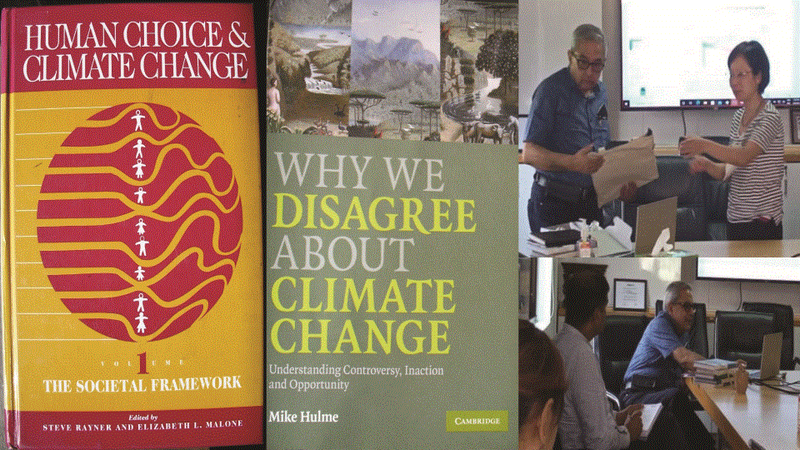 That the climate change debate and campaign are not taking the right direction was a concern I shared with my friend late Steve Raynerwhen I last met him in November 2019 after our “How Engineers Think” Oxford Workshop. Obsession with average global temperature is not of much help when it is increasing intensity and frequency of extreme weather events such as cloudbursts and wildly swinging polar vortexes that people from the tropics to the arctic have to cope with – and about which there is so little scientific work.Talk of adaptation has remained just that, mere talk, given how complex are myriad human societies across different ecological zones of the world. It is even worse in places like Nepal where interest of international scientific and development community is confined at best to studying glacial lake outburst floods (GLOFs) ignoring much more damaging bishyaris that are landslide-dammed lakes in the mid-hills where snow rarely falls. At worst, it confines itself to “policy impact” work, essentially funding not serious science but junketeering for politicians and senior bureaucrats, but doing nothing about Nepal’s alarming increase in fossil-fuel addiction.

Given that the climate change problem (with atmospheric global warming) was created by the energy sector, solutions (proposed fossil fuel use mitigation) are sought almost exclusively within it and not in other impacted sectors. For instance, society is impacted by climate change through the water sector with too much water, too little water, water at the wrong place and time and so on. But the water sector has been rather delinquent in coming up with its solution to the climate crisis, even though the impact is felt in areas as wide apart as agriculture, infrastructure design, migration of plant and human disease vectors etc.

Even within the water sector, there is the hegemony of Blue Water (concentrated surface water in rivers and lakes) that does not allow proper addressing of mal-development and climate change issues. Blue Water’s international transboundary concerns dominate the discourse and research funding when we should be more serious about better understanding White Water (in the atmosphere as “sky rivers”); worrying about the desiccating impact of global temperature rise on Green Water (soil moisture on which all our forests, wildlife and non-irrigated food depend); upset about the rampantly mined and polluted Brown Water (stored groundwater on which most human settlements depend for drinking water); recycling Grey Water (domestic wastewater with mostly organic pollutants); and preventing Black Water (highly polluted with toxic chemical wastes) from mixing with and degrading the other waters.

This quixotic myopia has arisen because the entire climate debate has been hijacked and hegemonized by policy monism focused exclusively on mitigation via bureaucratic procedural fetishism. And even here, the proposed solution of reducing fossil fuel consumption by 2050 by the amount and time-frame suggested is scientifically inadequate to keep the warming to below 1.50 Celsius. It is merely a consensus number deemed to be politically feasible by leaders of the Industrial North!The Global Industrialized North, in its un-reflexive worship of the unbridled market that has been the primary source of the climate problem, has weirdly proposed (as the notorious Larry Summers memo demonstrates) dispersing pollution to the “under-polluted Global South through “carbon trading”!

How did we come to this sorry state? The Kyoto Protocol of 1997 operationalizing UNFCC, for all its shortcomings, did manage to include the moral dimension of “equal but differentiated responsibilities”, i.e., that the Industrialized North created the problem since the 1850s and must bear a greater burden than the non-industrialized Global South. Sadly, between then and the global financial crisis of 2008, Industrial North has done everything in its powers to dilute its responsibility through legal and diplomatic means, quibbling over “bracketed texts” and all that at various COP gatherings. Its promise in 2009 Copenhagen climate conference of allocating $100 billion a year to help developing countries tackle the effects of climate change has come to nothing. At the 2021 COP26 in Glasgow, this pledge was further postponed to 2023! Now, with Ukraine, Industrial North going back to coal with a vengeance, and the looming global recession, they might as well have pledged the moon, even as that “equal but differentiated responsibilities” moral burden has now morphed into “loss and damage” claims, no matter that its actual redeeming might take as long as that of reparations for slavery.

These uncomfortable questions were raised in a seminal 4-volume study Human Choice and Climate Changebetween 1993 and 1998 led by Steve Rayner mentioned earlier and Elizabeth Malone. For the first (and sadly almost the last) time, ithad the social sciences look seriously at how they responded academically and policy-wise to climate change. Despite being sponsored by luminary institutions such as the US Department of Energy, Pacific North-West Lab, IIASA, NOAA, Korea Energy Economics Institute, Japan’s RTE, and many others, its findings exposed such uncomfortable knowledge that they were politely ignored, until Mike Hulme, the founding director of Tyndall Center for Climate Change Research, brought them up in his book Why We Disagree About Climate Change. In short, Hulme argues that as multi-hued humans in very diverse social groupings in many different ecological zones, we disagree about climate change and what should be done about it because we worry about very different things!

Editors and multi-country authors of Human Choice and Climate Changemake Ten Suggestions for Policy Makersthat are as relevant now as then. They lie in bringing in other more locally rooted social sciences than just narrow, efficiency-focused market economics to understand impact on local communities and how they will adapt with their more ingrained values; in realizing the limits of national planning, that too focused merely on fossil fuel use mitigation; and in understanding that institutional limits to global sustainability, despite technological advancements, will be reached long before environmental limits are breached. In short, social collapse will have occurred long before the very worst-caseenvironmental scenarios of climate change will come into effect!

How Prepared Is Nepal For Future Disasters? By Dr. Dhruba Gautam 21 hours, 9 minutes ago

The Informal Sector In Nepal: Myth And Reality By Shanker Man Singh 2 days, 22 hours ago

Is Combating Viruses With Vaccine Inequity Possible? By Radha Paudel 5 days, 22 hours ago