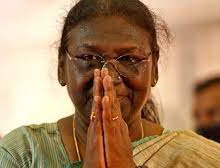 In his congratulatory message on twitter, Prime Minister Deuba expressed his confidence that the bilateral ties between the two neighbours, Nepal and India, will "see newer height in the days ahead" during the term of the 15th President of India.

BBC adds Droupadi Murmu, a tribal politician, has been elected as the new president of India.

The candidate of the governing Bharatiya Janata Party (BJP), the 64-year-old former teacher comes from Odisha (Orissa) state and has had a stint as a state governor.

Ms Murmu is the country's first tribal leader in the top post.

The president in India is the head of the state, but does not exercise executive powers.

He or she is elected by the members of both the houses of parliament and of the legislative assemblies of states and federally-administered union territories.

Ms Murmu registered a comfortable win against the opposition's candidate - veteran politician Yashwant Sinha. Mr Sinha, who was a senior minister in the BJP government led by then prime minister Atal Bihari Vajpayee in the 1990s and early 2000s, is now a vocal critic of the party and Prime Minister Narendra Modi.

Ms Murmu was chosen as the presidential candidate after a detailed discussion of 20 names that the BJP and its allies had considered.

She said she learnt about her nomination from television and the news had "surprised" and "delighted" her.

"As a tribal woman from remote Mayurbhanj district, I had not thought about becoming the candidate for the top post," she told reporters after learning of her nomination.

Political leaders in Odisha had welcomed her nomination, describing her as a "daughter of the soil".

Party colleague in the state, Kabi Vishnu Satpathy, who has known her since the 1980s, describes her as a "straightforward and simple" person.

"A compassionate woman, she's good at heart, with no arrogance, no airs. She doesn't show off, mixes freely with people and is humble and down-to-earth. As a politician, she knew how to take people along."

Next month, Indian lawmakers will also vote to select the country's vice-president.

The BJP has announced Jagdeep Dhankar - a senior leader who is currently governor of West Bengal state - as its candidate. The opposition is fielding Margaret Alva, a Congress veteran who has been a federal minister several times.

Who is Droupadi Murmu?

Ms Murmu came into the limelight in 2017 when it was rumoured that the BJP was considering her name for the presidential election that year. She was then serving as the governor of the state of Jharkhand.

Born in 1958 in Baidaposi village of Mayurbhanj district, Ms Murmu belongs to the Santhal community, one of India's largest tribal groups.

Daughter of a village council chief, she studied at the Ramadevi Women's College in the state capital, Bhubaneswar.

Journalist and activist Nigamananda Patnaik, who's known her since 1980, says Ms Murmu started her education in her village school.

"When she was a child, her father took her to the nearby town of Rairangpur when a minister in the Odisha government, Kartik Majhi, was visiting. Suddenly, she ran up onto the stage, waving her school certificate, and told the minister that she wanted to study in Bhubaneswar."

The minister was so impressed by the little girl's enthusiasm that he ordered his staff to help her get a place in a government school in the state capital, Ms Patnaik said.

Beginning her career as a clerk for the Odisha government, Ms Murmu served as a junior assistant in the irrigation and energy department from 1979-1983.

After she quit her job in Bhubaneswar and returned to Rairangpur to take care of her family at the insistence of her mother-in-law, she took up a job as a teacher at the Sri Aurobindo Integral School.

"But she refused to accept a salary. The school only paid her rickshaw fare. She said this was not a job, but public service. She said the salary of her husband, a bank officer, was enough to take care of the family needs," Ms Patnaik says.

Her political career began in 1997 when she was elected as a councillor in the local polls in Rairangpur. She was often seen personally supervising sanitation work in the town, standing in the sun as drains were cleaned and garbage cleared.

From 2000 to 2004, she was a minister in the state's coalition government, led by Naveen Patnaik of the Biju Janata Dal party. Initially in-charge of commerce and transport, she later handled the fisheries and animal resources portfolios.

From 2006 to 2009, Ms Murmu was the president of the BJP's state wing for "scheduled tribes" - tribal communities recognised by India's constitution as socially and economically disadvantaged.

Her life took a tragic turn in 2009 when she lost her elder son in mysterious circumstances. A few years later, she also lost her second son and her husband.

"She was heartbroken," Mr Satpathy said. "She would cry inconsolably whenever we'd meet. She used to say, 'there's nothing left in my life anymore'," he added.

But she pulled herself together and in 2015, she was appointed as the first female governor of the neighbouring state of Jharkhand. She held the position for six years until July 2021.

According to BBC Hindi's Ravi Prakash in Ranchi, Jharkhand's capital, Ms Murmu won appreciation during her tenure for keeping the governor's office open to people from all walks of life.

On several occasions, she also made news for breaking protocol - like when she visited Odisha Chief Minister Naveen Patnaik at his home or went with a delegation to meet the railway minister to press for expansion of rail services in Mayurbhanj, her home district.

"Both incidents were considered violation of protocol. But she couldn't care less," says Rajkishore Das, her political mentor.

Mr Das adds that the most remarkable part of Ms Murmu's personality "is her equanimity in both happy and sad times and her stoicism in the face of tragedy".

"The way she gathered herself and continued working for the people even after multiple tragedies in her family speaks volumes about her remarkable strength of character."