How Prepared Is Nepal For Future Disasters?

While Nepal is currently beset by multiple natural hazards, it is making good progress in preparing itself to prevent them from turning into natural disasters through measures as varied as institutionalizing local emergency operation centers, training officials and community members, warehousing supplies, and facilitating shelters. 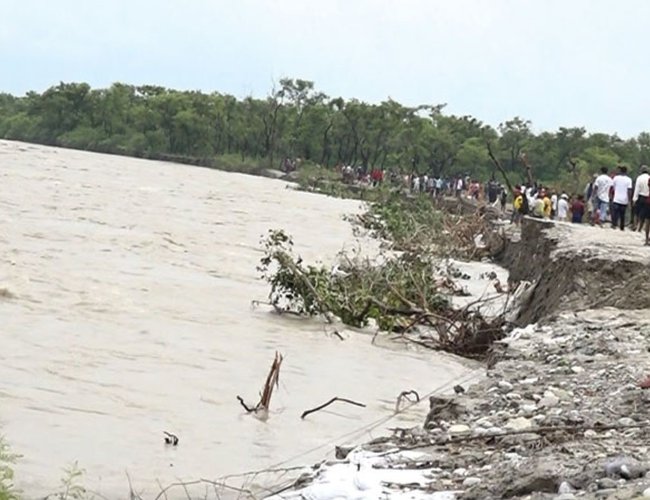 How much damage have disasters already done in Nepal?

In Nepal, water-induced disasters, namely floods and landslides, are at the top of a long list of climate impacts. Indeed, more than 80% of the total disasters in the country are of hydro-meteorological origin, and the intensity and frequency of such disasters are increasing. Weather-induced disasters were once seasonal but increasingly strike when least expected, badly damaging crops and other assets. Year in and year out Nepal faces over 500 disaster events, both large and small.

Among recent natural disasters, the 2014 and 2017 floods, 2015 earthquake, 2020 and 2021 landslides, and 2021 post-monsoon rainfall were all of notable scale. The most recent disaster occurred on 3 August, 2022, when the Saptakoshi River breached the western embankment, returning to its course of 40 years ago. Several settlements in Belaka Municipality of Udayapur District and Barahachhetra Municipality of Sunsari District were inundated, leaving more than 2,500 households homeless. Between 2015 and 2021, 12,315 Nepalis, 53% of them female, died due to disasters. Those most vulnerable include women, children, the elderly, people with disabilities, and marginalized communities.

Good disaster preparedness and emergency response reduce the felt consequences of a disaster, mitigating its impacts on public safety and the economy, thereby helping to prevent the loss of development gains and enable rapid recovery.

What has made Nepal’s disaster preparedness and emergency response increasingly successful?

Disaster preparedness and emergency response are critical in our efforts to reduce people’s suffering and mitigate loss and damage. Preparedness activities before disasters as well as systematic responses during and after disasters significantly alleviate the disaster burden. In recent years, such efforts have been good. In particular, Nepal has capitalized on its emergency operations centers (EoCs), high levels of awareness and capacity among ordinary citizens and agencies, the considerable logistics capacities of warehouses, and the readiness of shelters and open spaces to house the displaced.

Emergency Operations Centers: Based on the recommendations of a 2009 International Search and Rescue Advisory Group exercise, the Ministry of Home Affairs established the National EOC (NEOC) in December 2010. Since then, seven provincial EOCs, 70 district EOCs and 116 local EOCs have been established. All are operational but at different stages of development. These EOCs communicate disaster information across Nepal, involving government agencies and other response-and-recovery stakeholders such as the Nepal Red Cross Society, UN and humanitarian agencies, the private sector, INGOs and NGOs. They serve as the command-and-control facilities responsible for carrying out disaster preparedness and emergency response through coordination and information management.

EOCs divide their work into four phases: normal, alert, response and recovery. In a normal phase, they prepare for disasters, while in an alert phase, they warn agencies and authorities to get ready to respond. They lead the nation’s response to a disaster during a response phase and coordinate early and late recovery efforts during a recovery phase.

In 2012, standard operating procedures (SOPs) were devised to regulate the NEOC and DEOCs. The SOPs identify the minimal resources required for operation; define responsibility and authority; establish a communication flow system; determine the level of activation suitable for the magnitude of any given disaster event; establish a mechanism for coordinating with stakeholders on disaster preparedness and response; manage authentic and up-to-date data; and coordinate search-and-rescue as well as humanitarian aid and support. Later, after federalism was operationalized, SOPs were also developed for PEOCs and LEOCs. These later SOPs have not been implemented, however, in part because they seem not to reflect ground realities. Another weakness of the EOC system is that it lacks an adequate chain of command, thereby complicating coordination, implementation, and reporting. Once recent work on harmonizing the SOPs of the EOC system networks is complete—and it is close to being so—it will be easier to steer coordination and information management in a systematic way.

LEOCs are vital in the new federal context, but many nascent LEOCs are institutionally still quite weak, especially as they lack dedicated information management officers. Strengthening LEOCs will require providing technical and financial resources and tools and equipment as well as establishing an effective mechanism for coordinating among relevant agencies. In particular, there is a need for fire brigades, ambulance services, and the police to be able to share calls. There also needs to be a clear incidence command system (ICS). Currently, no policy spells out whether the ICS is the mayor, the deputy mayor, or a ward chairperson, thus making it difficult to arrange the inter-agency coordination and direction needed to manage multiple incidents, mobilize operational resources, and allocate roles and responsibilities.

Initiatives to build awareness and capacity: In recent years, in the spirit of the Sendai Framework for DRR and Nepal’s DRRM policy, many agencies involved in disaster preparedness and emergency response, such as staff colleges, local development training academies, security agencies, the civil service, the community-based disaster risk management platform, the private sector, and NGOs have implemented capacity-building initiatives to increase knowledge about disaster preparedness and response systems. These initiatives have been instrumental in enhancing understanding about risk communication and building public awareness.

The current level of training is inadequate for municipal authorities, however, and most task forces are still impeded by limited capacity. In addition, to be effective, training should go hand in hand with drills, which simulate the circumstances of a disaster and thereby give stakeholders a chance to practice their responses and help them face actual emergencies confidently. In Nepal, the technical and financial resources needed to conduct such drills are sadly limited. At the local government level, search-and-rescue and other response equipment and tools are insufficient to address the full range of possible disasters.

Contributions of warehouses: All three tiers of government as well as the NRCS and other humanitarian agencies have established warehouses to manage emergency responses. With support from the WFP and other UN agencies, the government has established seven Provincial ‘humanitarian staging areas (HSA)’, one in each province with the storage capacities of 1,535 metric ton. Each HAS can store enough humanitarian relief supplies to serve more than 60,000 people and is equipped with logistical items such as generators, satellite phones, fuel, boats, and search-and-rescue tools. Another 12 warehouses storing more than 17,000 relief kits are operated by the NRCS, and Nepal Food Corporation stores cereals and other food products for both emergencies and ordinary times. These are only few examples. The government has also begun to mobilize stored materials as needed.

Despite these excellent efforts, the number and capacity of existing warehouses cannot address the scale, magnitude, or frequency of disasters Nepal faces or help the number affected adequately. The warehouses do not have the required food and non-food relief items or the equipment needed to search for people in large collapsed structures. In addition, most warehouses have limited space and lack SOPs to systematize the sharing of materials and equipment as well as mechanisms of replenishment. Limited stockpiles, a poor inventory system, and threats like flooding, fire, pests and dampness are other hurdles, as is the fact that most warehouse staff are not trained in inventory management.

Services of emergency shelters and open spaces: The government has started to map public buildings and other available infrastructures suitable for providing shelter after a large-scale evacuation but still needs to improve its identification of open spaces such as parks, grazing land, and riverbanks. In addition, some public buildings and community centers identified as possible future shelters lack adequate WASH facilities, meaning that they will be unable to secure the protection rights of displaced vulnerable groups. In 2013 and 2019, the federal government identified 83 open spaces on flat land (2,968,134 sq m in total) in Kathmandu Valley capable of managing a displaced population, but a 2020 IOM survey report claims that only about half of these sites are actually usable; the rest have been encroached on by new buildings, storage areas, and infrastructure expansion. Elsewhere in the nation, little effort has been made to identify open spaces. The government lacks a comprehensive plan for a mega disaster. On the positive side, up-to-date maps of all open spaces and their attributes have been compiled into an open space map atlas, and GIS data sets and maps have been integrated into a web-based digital open-space platform for humanitarian assistance

How can Nepal move ahead in the future?

If Nepal focuses on EOCs, training, warehouses, and emergency shelter, it should be able to move ahead with confidence in mitigating the impacts of disasters.

LEOCs. Local-level EOCs need to be established and their technical capacities strengthened, in part through software and hardware packages. In addition, SOPs have to be revised to eliminate duplication and enhance coordination, communication, and information management. Local governments, along with the DHM and NARC, need guidance in disseminating impact-based early warning messages to farmers in a timely fashion and in designing early warning plans that take into account the needs, capabilities, and preferences of vulnerable groups. Local officials need to participate in training as well as drills and simulations so that they learn what to do with early warnings. There is a need to equip LEOC staff to command operations, execute plans, handle logistics and foster inter-agency coordination.

Training. The government needs to conduct a training needs assessment to identify capacity gaps, then develop suitable curricula to address those gaps, impart the training required and assess its effectiveness through periodic monitoring. The capacity of local government authorities to improve their disaster preparedness and emergency response also needs to be built through hands-on, inter-agency tabletop exercises, drills and simulations. Security agencies should be trained in community-based emergency response training and water rescue management, and local and NRCS volunteers should be trained to serve as emergency responders. Tools and equipment must be properly procured, inventoried, and replenished, as called for in SOPs. Even during periods without disasters, the government must be active, for example, disseminating safety-related information using media like the radio, TV and social media.

Warehouses. It is crucial to build the institutional capacities of warehouses to manage the food and non-food items that quick needs assessments demand and to establish e-template-based inventory systems. Local vendors, the private sector, and governments should be mobilized to stock sufficient non-food items along with emergency rescue equipment, essential special food, medicine, sanitary materials, and auxiliary equipment. Healthcare systems need to be improved by allocating adequate equipment and trained human resources. Similarly, staff need training to increase their ability to provide pre-hospital care to casualties, manage mortality, and safeguard assets during a medium- to large-scale evacuation.

Shelters and open spaces. In coordination with the federal government, shelter clusters need to redefine their roles and responsibilities. With support from CSOs, NGOs, and the private sector, shelter clusters also need to map evacuation routes as well as possible shelters and open spaces and ensure that the latter have adequate social amenities. Similarly, livestock shelters need to be identified and equipped. Regular meetings of chief district officers and district magistrates as well as of the India-Nepal Joint Committee on Inundation and Flood Management are critical. The citizen forums formed along the Indo-Nepal border need to be reformed and reactivated and flood resilience strengthened through cross-border early warning systems.

(Dr. Gautam is an Independent Researcher and Consultant. He is associated with National Disaster Risk Reduction Centre (NDRC) Nepal as Senior Research Fellow and HADRI/Western Sydney University as Adjunct Fellow. He can be reached through drrgautam@gmail.com)

The “Safe School” Campaign: Is Nepal moving In The Right Direction?
Sep 12, 2022
Nepal’s DRRM Policy Landscape: Well On The Way To Making Nepal Ready And Able To Respond To Disasters
Aug 22, 2022
Without Cooperation, Water-Induced Disasters Will Continue To Wreak Havoc
Jul 27, 2022
COVID-19 And Social Protection: WhatAre The Next Steps?
Jun 11, 2020
Growing Fire Incidents Wreaking Heavy Losses in Nepal
May 14, 2020

Three Decades Of Engagement In Climate Negotiations By Batu Uprety 16 hours, 52 minutes ago