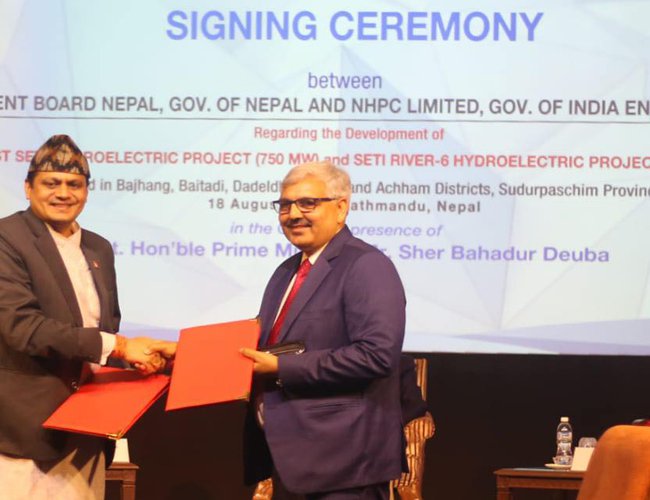 The Investment Board Nepal (IBN) has signed a Memorandum of Understanding (MoU) with an Indian government company, NHPC Limited, to develop the 750 MW West Seti and 450 MW Seti River-6 hydroelectricity projects reports The Rising Nepal.

Chief Executive Officer of the Office of the IBN Sushil Bhatta and Chairman and Managing Director of NHPC Abhay Kumar Singh signed the MoU at a program organized in the capital on Thursday.

The estimated cost of the West Seti project is US$1,320 million, and Seti River-6 will need about US$ 450 million.

PM Deuba, on the occasion, appreciated the cooperation of India in Nepal's development including in tapping the hydropower potential.

"Hydropower is one of the areas for competitive investment in Nepal," he said while maintaining that the construction of the two large energy projects will support in the multidimensional development in the Sudurpaschim Province.

PM Deuba also expressed his hope that the two projects would be developed in a timely manner and directed the IBN to make effective cooperation and collaboration. "I would like to express my commitment that the government of Nepal will facilitate the NHPC in developing the projects," he stated.

IBN’s CEO Bhatta said that both the projects are national priority projects and expressed his hope that the sincerity exhibited by the company so far would be continued in the days to come in order to complete the projects within the stipulated time.

Likewise, Singh pledged that every possible effort would be put into the development of the projects since they are connected with the sentiment of the people of west Nepal.

A meeting of the IBN chaired by Prime Minister Sher Bahadur Deuba on August 8 approved the MoU to conduct a feasibility study for the development of the two hydel projects, to be signed with the NHPC.

Earlier in May this year, PM Deuba and his Indian counterpart Narendra Modi, during the latter's visit to Lumbini on the occasion of Buddha Jayanti, had agreed to hand over the two projects to an Indian government-run company for their development.

The two projects will be based in five districts in Sudurpaschim Province.

Nepal will get about Rs. 167 billion in royalties and taxes from the two hydroelectricity projects. Likewise, people in the project-affected areas will get shares of the company.

The regulated flow of water in the Seti River will also help in irrigating land in Kailai and Bardiya districts while at the same time, the projects are expected to support minimizing damages downstream caused by the floods in the river.

Both the projects will be developed in the same river basin at a distance of about 50 km. The two projects were showcased in Nepal Investment Summit 2019.