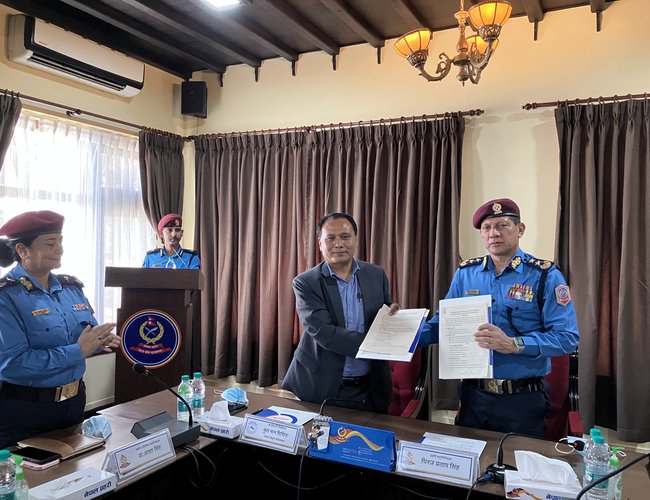 Nepal Electricity Authority (NEA) to provide necessary support to Nepal Police to set up charging stations at 25 locations, including the five petrol pumps, one currently being operated by the Police Welfare Fund. However, four proposed petrol pumps and other suitable locations of the remaining police offices.

For this, a memorandum of understanding (MoU) has been signed between the Nepal Police and the Nepal Electricity Authority (NEA) for the construction and operation of electric vehicle charging stations.

Inspector General of Nepal Police Dhiraj Pratap Singh and Managing Director of NEA Kul Man Ghising signed the memorandum of understanding on behalf of their respective institutions at a programme held at Police Headquarters, Naxal, on Monday.

The charging stations will be operated under the Police Welfare Fund in the long run.

According to the MoU, the NEA will purchase all the equipment and infrastructure of the charging stations at its own expense, said a press statement issued by the NEA.

The NEA will also be responsible for the maintenance and regular 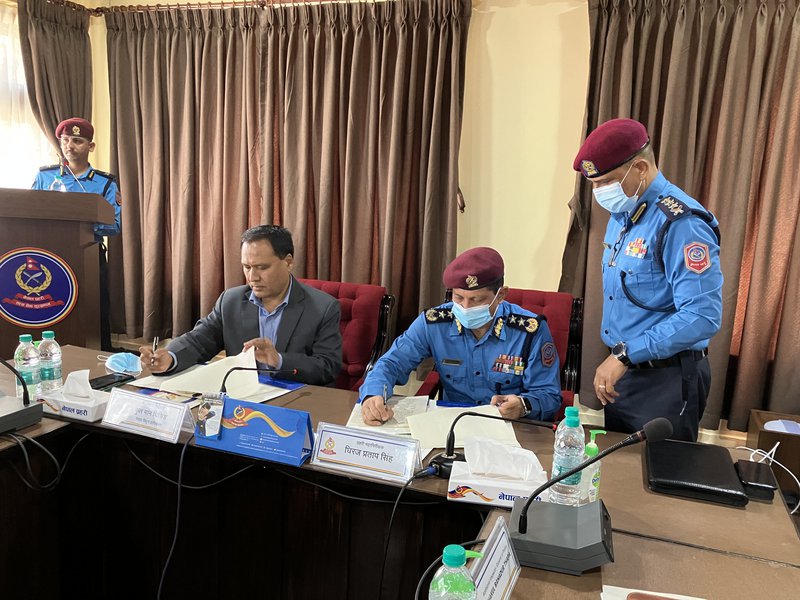 servicing of the equipment. The police will provide a suitable location for the construction of the infrastructure and after their construction by the NEA, police will operate and guard the charging stations.

While operating the charging stations, it is necessary to arrange that the public can easily use them at a rate fixed by the NEA.

The utility will collect the fee paid by the consumers while charging the vehicles.

According to the provisions of the Electricity Distribution Regulations, 50 per cent of the total profit from the electricity tariff rate will be received by the Welfare Division of the Police as operating and management expenses of the charging station.

In the programme, Inspector General of Police Singh said that it was a historic opportunity to sign the MoU for the establishment of charging stations for the consumption of electricity generated within the country using electric vehicles.

Ghising said that the MoU was an important milestone to establish smart charging stations at 25 locations to encourage the use of electric vehicles and reduce the consumption of petroleum products.

"About Rs. 10 million will be required for the construction of infrastructure of the charging stations and necessary equipment. In order to encourage the use of electric vehicles, a special subsidised rate has been set at an average of about Rs. 5 per unit in the electricity tariff," he said.

"The cost of a vehicle running on petroleum is Rs. 15 to Rs. 20 per kilometre, while the cost of an electric vehicle is very cheap, around Rs. 0.60 to Rs. 1 per kilometre."

To encourage the use of electric vehicles, the NEA is constructing modern charging stations that can charge quickly at 51 locations across the country.

Every charging station being constructed by the Authority will be equipped with a 142 KW charger, a 50 kVA transformer for power supply and an online billing system.

Fast charging 60-60 kilowatt DC and 22 kilowatt AC chargers will be installed at each charging station, said the NEA. With this, three vehicles, including big buses, can be charged simultaneously.

The software of the charging station will be kept in the Authority's data centre so that more than 300 chargers can be served.

All the stations will be controlled from Kathmandu. After charging the vehicles, the customer can pay the bill through the QR code and mobile app, it said.

Finance Ministry Cut The Budget Of Purchasing Newspapers And Printing Under its Austerity Measures By Agencies 4 days, 17 hours ago