Nepal To Plant 30,000 Trees To Support Sadguru’s Save Soil Campaign

Nepal To Plant 30,000 Trees To Support Sadguru’s Save Soil Campaign 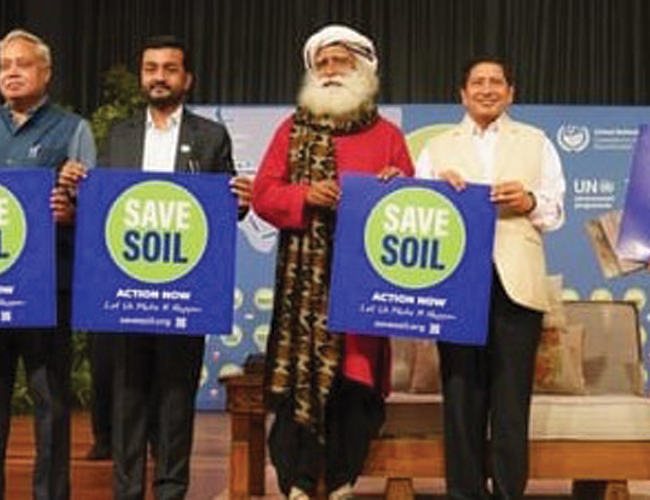 Showing solidarity with Sadhguru’s Save Soil Scheme, a global campaign to create awareness on soil and save humanity by conserving soil, Nepal will plant 30,000 plants

Sadhguru said that soil is the source of life and most people think it as an inner substance they can fix adding the chemicals but what needs to understand is that soil is the largest human living system and without the soil, there is no human existence.

Launching the program, Forest and Environment Minister Pradeep Yadav has said that the ministry would plant 30,000 trees across the country to express solidarity with Sadhguru's ‘Save Soil’ campaign.

Speaking at a campaign awareness programme organised in Godawari, Lalitpur, on Friday in the presence of Jagadish (Jaggi) Vasudev, popularly known by Sadhguru, Minister Yadav promised that the government would plant 30,000 trees on the edges of the lakes and cities in the name of Sadhguru from this week.

The 65-year-old spiritual guru raised public awareness by riding a motorcycle and traveling 30,000 kilometers in 100 days to various countries for the campaign.

Honouring Sadhguru's campaign, Minister Yadav said that such a work should be done by the government, but Sadhguru's steps to protect humanity and the planet earth are highly commendable and Nepal government would support the novel campaign initiated by Sadhguru.

Stating that about 48 percent of the soil is in good condition, Minister Yadav said that his ministry would fully support Sadhguru's campaign.

In the programme, Minister Yadav handed the letter of solidarity to Sadhguru and also presented a statue of one-horned rhinoceros as a gift.

Save Soil is a global campaign to create awareness on soil and save humanity by conserving soil.

Speaking at the programme, Sadhguru said that despite the modern development, this year seven countries in the world is going to see famine and 39 million people of the world are now in the famine situation and 30,60000 children aged below eight are estimated to die because of lack of food simply because the World Food Programme said they cannot afford food because the money has gone to war effort elsewhere.

He added that by 2032, 3.5 billion people will suffer from lack of drinking water and by 2045, scientists estimate that the world will see 40 per cent reduction in food production.