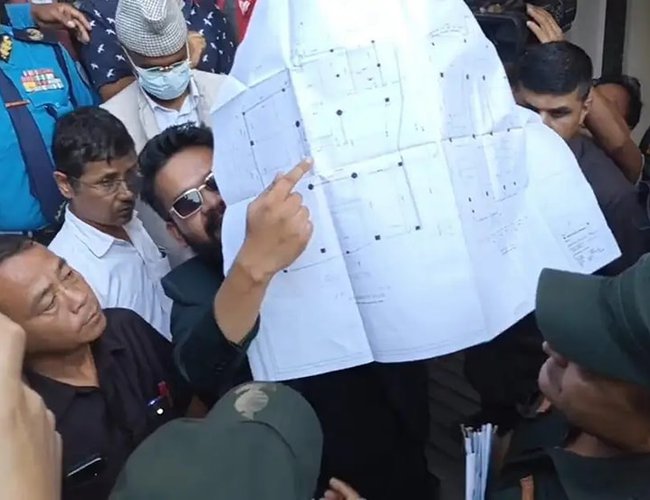 Map pass, payment deadline, demolition first, second, third reminder letter, finally dozer.... For a few days now, there has been a positive voice from all sectors of the demolition of the physical constructions that are not as per the approved map and 35 days' notice to be demolished.

All of us have experienced the bitter experience of running a local body for nearly 20 years from the staff and not from the elected body. In the village, there was a situation where the office was in the pocket of the secretary and the race had to be done. Currently, that situation is no longer there, but the bad side of it and the anomalies left by it remain.

The order of demolition of the current structure should also be seen in this context. Kathmandu Metropolitan Municipality has been working intensively to demolish the illegally constructed buildings in Kathmandu Metropolitan Municipality. There should be a mechanism to inform the local government about such illegal constructions in advance. Owners should also not engage in such illegal activities.

In Nepal and especially in Kathmandu, the increasing number of vehicles has made it narrow. One can imagine how miserable the situation would have been if the Bhattarai government had not started the expansion campaign. In order to restore the beauty of the city, the illegally constructed structures should be razed. The beautification drives of Paris and New York prove this point.

The process of urbanization involves the expansion of existing urban settlements and the classification of rural areas as cities. Defining what is 'rural' and 'urban' is based on different criteria: increase in population and population density, greater revenue generation, greater economic importance in terms of GDP, share, and greater percentage of employment in non-agricultural activities.

Many of these services and infrastructure require new construction. All such building activities in the city are governed by “Zoning Regulations” and “Building By-Laws”, also known as Development Control Rules.

These are included in the city's Development Plan (DP) or Master Plan - a dynamic long-term document that typically covers 20 years and provides a conceptual framework for future development.

Around 2001, the hero of a Bollywood movie, an aspiring journalist, takes over the job of Chief Minister for a day after being challenged by a politician. He decides to address problems that affect the common people. He suspends corrupt and incompetent officials. He works towards ensuring housing and employment for the needy.

Lately, many people in Nepal have been thinking of Hindi movies depicting similarities between the hero and the mayor of Kathmandu Metropolitan City, who are trying to solve the serious problems of the city, which are built illegally and do not follow the approved design.

The municipality has been continuing the demolition campaign for the past few weeks under the direction of the mayor who became an independent candidate after defeating the party candidate. In the videos and photos, a bulldozer is seen leading a bulldozer to demolish the structure, showing a map to prove the structures were built illegally, built near a large building, and some others whose livelihoods are threatened.

It is said that the city administration used an excavator to remove the illegal structure using the executive authority given by Section 11 (2) of the Local Government Operation Act 2074 (2017). This action drew cheers from many, but also anger from some.

Some time ago, the Nepali Congress MP accused himself of disobeying the law. He argued that the Metropolitan Corporation should send a letter to those who violate the law and take appropriate measures such as paying a fine if they violate the rules. He further said that lawlessness should not be promoted in the valley. Meanwhile, CPN-UML MPs also accused him of trying to portray himself as a 'hero' by doing a 'publicity stunt'. He criticized that he should not be afraid of the support he is getting for his work on social media. Those who have taken permission for basement parking to construct the building have taken various grants and facilities from the city. But in most cases, individuals and organizations have violated the law, the statement said.

During the demolition drive, the Kathmandu Metropolitan issued a 35-day public notice on June 18. And after the deadline, the municipality proceeded with the work. The city's argument was that the basement design was approved for car parking and it could not be used for other purposes.

Among the prescriptions of development control regulations, zoning is a planning control tool for regulating the built environment. During the cursory review, Kathmandu Metropolitan has approved the maps of 278 buildings with an area of more than 10,000 square feet from the financial year 2075/076 to 2078/79.The Kathmandu branch of the Federation of Nepal Chamber of Commerce and Industry has accused the mayor of Kathmandu of abusing his authority. Many business owners expressed dissatisfaction with how this was done. He said it was wrong to destroy the business when there was a dispute between the city government and the landlord. “Why are we punishing small businessmen? He is abusing his power as tax-paying businesses are disappearing overnight,” he says. He, who is also the central vice-president of the Federation, felt that this action had less impact on the business before the start of Dashain, and the Kathmandu branch called a meeting to discuss this. He said that this work should end as soon as possible.

Meanwhile, the National Federation of Nepal Transport Professionals has praised this step. The parking lot has been converted into a shop. This means that all private vehicles are parked on the road. If we can use the parking lot, he was confident that the traffic jam will be reduced by 30 percent.

Zoning regulations mandate the different types of construction that can occur in that area. Single-use zoning would divide a city into areas where only one type of land use would be allowed. For example, a residential zone allows construction of housing and a commercial zone allows building for commercial activities, but not vice versa.

Mixed-use zoning, on the other hand, allows more than one use. For example, in a mixed-use zone, a certain percentage of the land area may be residential and some commercial.

However, mixed-use zoning does not allow non-compatible uses in the same area because the premise of zoning is to “separate incompatible uses from one another. Zoning also regulates how much can be built on a plot of land. Such conditions are outlined to manage concerns for the environment, as well as the health and safety of citizens. For example, there should be adequate ventilation and lighting, and structures should be constructed in such a way as to provide easy access to fire services in case of emergency.

Thus restricting the amount of construction on a plot of land using the concept of floor space index or floor area ratio. It is generally accepted among people that destroying physical structures is easier than building them. There's a "cathartic thrill" to throwing your destructive energy at defenseless inanimate objects.