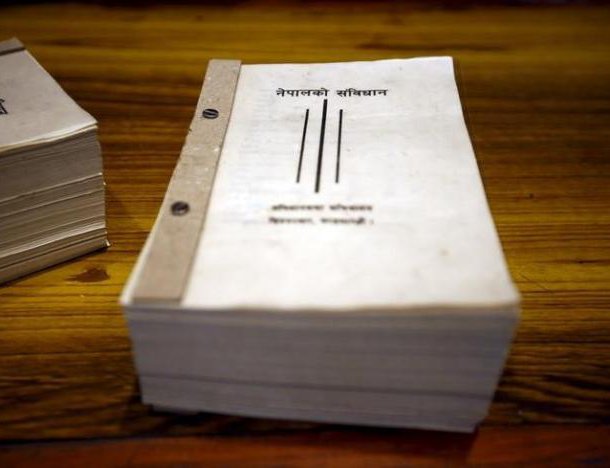 As Nepal is celebrating seventy years of the Seven Constitution, Nepal’s constitutional process is facing a major crisis. After failing to pass the impeachment motion from the House of Representatives and the decision of the government to place chief justice Cholendra Sumsher Rana under house detention to prevent an attempt to

Although Constitution Day- Ashoj 3- is being observed by organizing various programs across the country today terming it a historic day, the seven years of experience in its implementation do not give a good indication.

Despite holding national, provincial and local level elections and completing the first tenure, provincial governments and local government leaders criticize the central government for working in a unitary mindset. The major blow for the system was to place its chief justice under house arrest.

The Day marks the promulgation of the constitution written by the people's representatives via the constituent assembly on Ashoj 3, 2072BS.

The present constitution is the seventh written constitution of Nepal which has aimed at establishing socialism through citizens' socioeconomic and cultural rights. It bears special significance for it was promulgated via the constituent assembly based on the second people's movement, peace accord and peace process.

The peace accord was signed earlier between the then seven political parties and CPN (Maoist) party. Importantly, it has formally institutionalized the new system of a federal democratic republic with the abolition of the unitary system and monarchy. There are currently seven provinces, 753 local levels and a federal government as per the new form of governance adopted by the new constitution. The national charter has 35 Parts, 308 Articles and 9 Schedules.

Meanwhile, a special function is being organized at Army Pavilion at Tundikhel this morning.

The constitution promulgated by the citizen of Nepal for themselves is being embraced by one and all gradually. The incumbent government has put in place necessary policies and laws to enforce the constitution while efforts were underway to implement federalism effectively in the country. (RSS)

Former president Dr. Ram Baran Yadav claimed that asoj 3, is a historical and unforgettable day for every Nepali. “Because we have been celebrating our constitution for the 7th year since its adoption in September 2015. We practiced the constitution for five years after electing three-tier governments—Federal, Provincial, and Local. The country will hold a second periodic election to elect the federal and provincial legislatures for the next five years. It's heartening to note that the constitution is currently moving on the right track,” said Yadav.

Federalists criticize the central leaders for not allowing local and provincial governments to work as per the spirit of the constitution. “Although Nepal is now a federal state and we have been practicing it, provincial and local government is yet to get the rights and resources to function under a federal spirit,” said Chief Minister of Madhesh Pradesh Lalbabu Raut. “ The federal leaders are working in centrist approach which is against the spirit of federalism.”