Nepali Congress To Proceed With Nominations Of Candidacies For FPTP System

Nepali Congress To Proceed With Nominations Of Candidacies For FPTP System 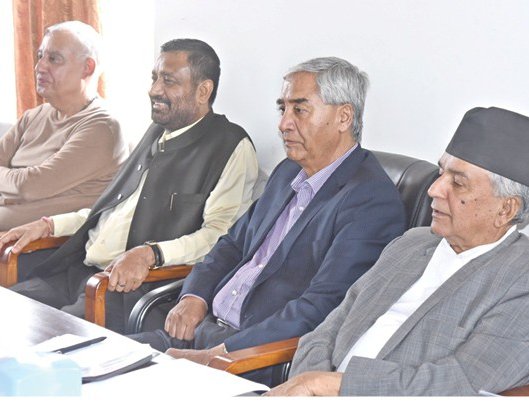 A meeting of the Nepali Congress (NC) central working execution committee on Monday decided to proceed with the nominations of candidates for the House of Representatives (HoR) and Province Assembly (PA) elections towards the first-past-the-post (FPTP) voting.

The meeting presided by party central President and Prime Minister Sher Bahadur Deuba took a decision to this regard, according to party chief secretary Krishna Prasad Poudel.

As said the press statement issued by Poudel, the revised closed name list of party candidates towards the Proportional Representation (PR) system was submitted to the Election Commission on October 1.

As per the proposal floated by party general secretary Bishow Prakash Sharma which was unanimously accepted by the meeting, recommendations made from the party’s various levels in line of the party statute, personal qualifications, the level of integrity, work efficiency, contribution to democratic movements, social status, contribution to the party various levels, public image and identity and the potentiality will be the criteria of the selections of candidates towards the FPTP electoral system.

More, the meeting decided not to give any space to an individual who was the candidate (for any post) in the latest local elections in the HoR and PA elections towards the direct system. The meeting is yet to decide on the role of those facing the party’s disciplinary actions before this in the upcoming elections.

The meeting has urged one and all in the party line to contribute for party’s ‘victory’ in the voting for twin elections taking place on coming November 20 in a single phase.

The meeting also extended best wishes to all Nepali sisters and brothers at home and abroad on the occasion of the Dashain festival.

In addition to this, the meeting decided to remain fully dedicated and contribute to making candidates on behalf of the party and the alliance victorious in the elections.