Progress in early warning system in Nepal is indeed encouraging, however there are many loose threads that needs to be pulled together for making the system more effective, sustainable and resilient. 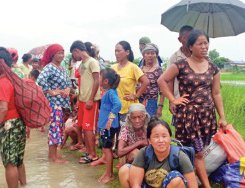 The United Nations celebrate 13 October as the International Day for Disaster Risk Reduction (IDDRR) to promote a global culture of disaster risk reduction. In 2022, the International Day is being celebrated by focusing on Target G of the Sendai Framework: “Substantially increase the availability of and access to multi-hazard early warning systems and disaster risk information and assessments to people by 2030.” On this IDDRR day, following messages are conveyed by Hon. UN-SG and UN-SRSG respectively-

Antonio Guterres, UN Secretary General - “Building resilience to climate change and reducing disaster risk and losses is vital to save lives and livelihoods, eradicate poverty and hunger and achieve the Sustainable Development Goals”. In the same direction, “the United Nations will spearhead new action to ensure every person on Earth is protected by early warning systems within five years”.

Mami Mizutori, SRSG for DRR and Head of UN-DRR- “We need end-to-end and people-centered systems which will stop the spiral of disaster destruction and contribute to a more sustainable, more resilient and more equitable future”.

The single agenda of SFDRRR 2015 is to avoid creating new and reduce existing risk of all types. People-centered early warning system (EWS) and preparedness are found as enabler to early action directed to minimize the harm to people, assets and livelihoods. The EWS is considered as a priority element of DRR and resilience building. By now, this fact is well acknowledged both by the relevant government authorities and DRR professionals and practicenors and therefore the coverage of EWS has significantly increased in the recent years particularly in Least Developed Countries (LDCs) and Small Island Developing States (SIDS). Nepal is also on the same track and over the last 15 years, many EWSs have been established in over one dozen rivers in Nepal. The EWS has therefore slowly increased both in numbers (mainly attached to key river basins) and geographic footprints. Many individuals, communities, and government and non-government organizations are working on further developing the EWS in Nepal.

The system is also evolved over the period of time based on the experience, performance and initial results noted on the ground. This evolution is expected in view of the changing discourse of disaster risk reduction and management fueled by systemic and cascading effect and rapidly growing climate change concerns and impacts on the ground. The early warning system needs to be more holistic and integrated. Only by identifying an incoming hazard is not enough, while the system must also ensure that the populations (with priorities to communities at risk) and sectors that are at risk can receive timely alert, understand it, and most importantly, act on it following the standard and practical operating procedure. Hence, an early warning must trigger early action that is well prepared, tested and put in practice. This sometimes means securing vital documents, evacuating and seeking appropriate shelter, prepositioning of relief items and other measures that can help to reduce and avert a disaster. The system must possess few features, which are indispensable to leverage the best optimal result targeted towards saving lives, properties and infrastructures with priority to poor, marginalized, disable and communities at risk. The essential features of effective EWS are:

People-centered: this means designing the systems with people in mind, to empower them to act on time and in an appropriate manner to reduce potential harm. 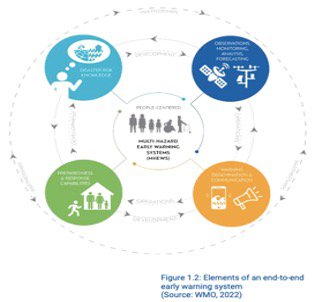 Progress in early warning system in Nepal is indeed encouraging, however there are many loose threads that needs to be pulled together for making the system more effective, sustainable and resilient. It is difficult to say that our EWS follows all key features that are fundamental to meet its objective. Our systems are rarely based on multi-hazard approach (dominated by community-based flood EWS) and on many occasions, they are not fully people-centered and do not provide end-to-end solution. With the emergence of new hazards like animal terror, urban fire, bush fire, urban flooding, drought and frequent landslides, having multi-hazard embedded EWS is indispensable and urgent. The new constitution (2015) of Nepal has significantly empowered the local governments and they are now fully responsible to address all cycles of DRRM with focus on implementation of risk reduction initiatives. Unfortunately, the early warning systems are not fully integrated into the legislations and operational structure of local governance including disaster section/department and DRRM committees at the municipal, ward and community level. Besides, there is in sufficient training, capacities and know-how developed in this direction. In addition, how well the DIMS, being created at the local level internalizes the need of more profound (multisectoral and multi-dimensional) risk knowledge and risk data to support EWS and its successful operation in the local context. This situation puts a big question mark on the successful operation, maintenance and sustainability of the system at large

Many initiatives which have potential to contribute towards making EWS more effective and efficient are scarcely coordinated and harmonized. In the recent time, the investment (supported by both state and non-state actors) in disaster risk reduction and management has comparatively increased particularly at the local level although not significantly. It is important to understand here, where this DRR fund is spent and whether EWS and preparedness is the priority of the disaster fund. Investment in disaster risk data system, new technologies and also in awareness and knowledge building of local communities should be the preference of the local municipalities. On the other hand, many new Local Emergency Operation Centers (LEOCs) and District Emergency Operation Centers (DEOCs) have been established recently in different regions of the country. How well these initiatives are linked and aligned with the early warning systems, demand a through enquiry and detailed investigation. At the same time, the recent three-day weather forecast released by the DHM, which is largely accurate is scarcely tied by EWSs and are not fully people centered and follows end-to-end solution approach. The method adopted to communicate the weather forecast is not always in the language of local people and therefore hardly value to the end users (like farmers). The rampant loss of agriculture yields (aggravating food insecurity situation) in last year pre-monsoon rain in West Nepal is the clear sign of ineffective early warning communication reaching to the last mile. While at the places (recent flooding in Koshi area) where the early warning was better coordinated and acted upon, the loss of lives was minimal while it also helped to save valuable private assets and livestock.

Majority of municipalities have developed local level disaster management plan (DPRP, EPRP, LDCRP) but are they sufficiently sensitive and integrate EWS process, procedures and concerns. Do these plans back early warning system and promote disaster prevention and mitigation leading to improved preparedness. The existing and future early warning systems also need to be closely linked with the recent initiatives in the areas of early and anticipatory action, impact-based and forecast based financing, risk sensitive land-use planning, resilience roadmap and others. Better alignment will not only boost the prospect but will also help in making the EWSs more targeted and tangible. The system therefore demands a more wholesome and systemic approach contributing to community preparedness and resilience building.

The Author is an Urban Governance and DRR Specialist having more than 15 years of extensive experience in this field. He is presently working as a freelance consultant mainly with UN agencies, Development Partners and multi-lateral donors. Besides, he interacts and engage closely with all three layers of governments with priority to local governments and local communities.

China’s Rapid Transformation And Lessons To Learn By Krishna Silwal 2 days, 8 hours ago

Youths In Nepal Elections: From Social Media To National Platform By Sangya Dhakal 4 days, 6 hours ago

Skeleton In The Sandook By Hemant Arjyal 5 days, 5 hours ago

An Overture Filled with Confusion By Dr. K. Uprety 6 days, 11 hours ago