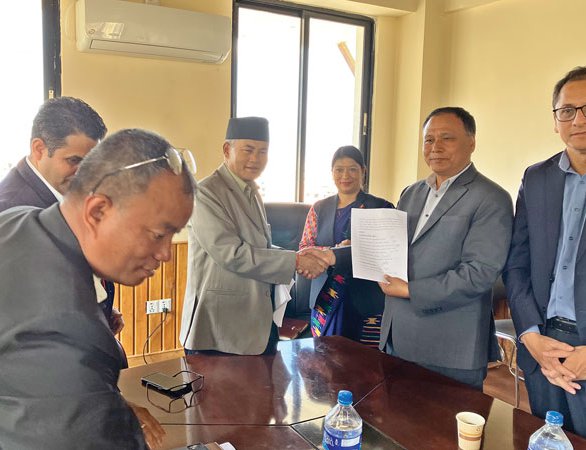 After almost a decade long obstruction, NEA and Kritipur Municipality along wit local community have agreed to resume the construction of 132 kV substation in Kirtipur Municipality-6 Chobhar.

Local residents have been resisting it following the Nepal Electricity Authority (NEA) proceeded with the construction process of 132/11 kV substation on 12 ropani land in Chobhar, Bhutkhel owned by Himal Cement.

The meeting of the Council of Ministers on January 31, 2022 had decided to provide the land owned by Himal Cement to the Authority on lease for construction of the substation.

The Authority had made it clear that the substation could not be moved to other places as the initial pre-construction works such as survey, soil testing, and design had been completed and the government had given the land for use.

It has been agreed that the Authority will address the demands raised by the locals and arrange the necessary budget for that.

The demand will be addressed through discussion and agreement with Kirtipur Municipality, local clubs, organisations and local citizens, said the NEA.

Since about 2 km of 11 kV lines and poles starting from the entrance of dry port in Chobhar are not safe, it has been agreed that the NEA will manage the line by putting them underground according to the demand of the locals.

Considering the urgency of electricity supply, it was decided in the meeting not to obstruct the construction of the substation and for this, the concerned ward will provide the necessary support.

In the meeting, Mayor Nakarmi said that he and the municipality will always support the development works.

“Chobhar substation is very important to meet the demand of electricity in Kirtipur and surrounding areas, which is a specialty of Kathmandu valley, and to make the supply reliable and qualitative,” he said.

"If such substations cannot be built, in a few years even if electricity is available, there will be a situation where power supply will have to be cut in the Kathmandu Valley."

Local residents of Khokana, Bungmati, Harisiddhi and Lamatar areas of Lalitpur are obstructing the construction of the Thankot-Chapagaun-Bhaktapur 132 kV transmission line, which is considered important for improving the electricity supply in Kathmandu Valley.

As the transmission line could not be built due to local obstacles, the Authority has proceeded with the construction of a substation in Chobhar as an alternative. The Chobhar substation is going to be constructed with the concessional loan received from Asian Development Bank through the Kathmandu Valley Transmission Capacity Strengthening Project.

There will be two power transformers of 45 MVA capacity in the substation. The Authority has systematically forwarded the construction of transmission and distribution infrastructure network analysing the forecast of demand for electricity of 925 megawatts by 2030, 1,825 megawatts by 2040 and 3,169 megawatts by 2050.

NADA Demands To Allow Import Of All Vehicles And Concessional Loans By NEW SPOTLIGHT ONLINE 8 hours, 27 minutes ago