COP 27: Flagging the Impacts in the Mountains

Nepal participated in this 'implementation COP' under the leadership of Ms. Uma Regmi, Minister for Women, Children and Senior Citizens. She made a statement during a meeting of the ministers of South Asian countries 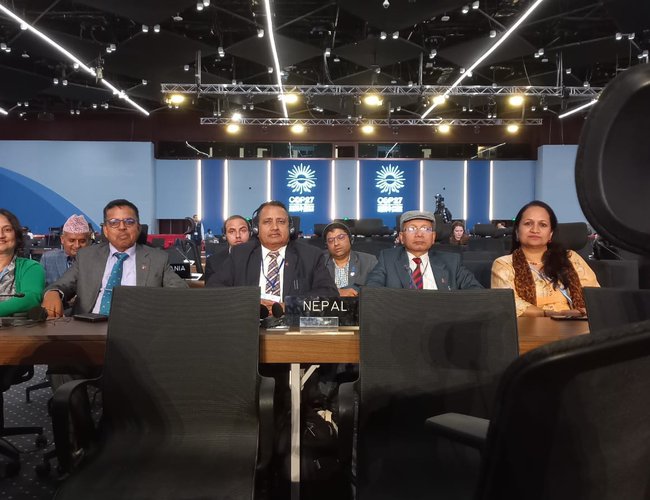 Nepal has continuously flagged the alarming impacts of climate change in the mountains right from mid-1990s through her political statements in the high-level segment of the Conference of the Parties (CoPs) to the UN Framework Convention on Climate Change (UNFCCC). This was reiterated by the then Prime Minister in 2009, President in 2018 and Prime Minister in 2021 during the climate change conferences. Messages of the cabinet meeting at Kalapatthar, the sub-regional conference on Kathmandu to Copenhagen and Copenhagen marchpast of the mountaineers were communicated to the international communities at Copenhagen where Nepal declared to launch 'Mountain Initiatives'. This resulted in the adoption of the Kathmandu Declaration during the international conference of mountain countries on climate change in April 2012, including the urgency of addressing the severe impacts of climate change through the national level conferences at Rara, Gufa Danda and recently at Mustang.

Nepal participated in this 'implementation COP' under the leadership of Ms Uma Regmi, Minister for Women, Children and Senior Citizens. She made a statement during a meeting of the ministers of South Asian countries. Nepal,in its statement at the high-level segment, has reiterated the climate crisis and snow and ice melting in the mountains, flagged inadequate progress in reducing emissions and temperature levels, reinformed her commitment to net-zero emissions by 2045, urged for adequate technical and financial support and developed and economically emerging countries to set more ambitious targets through their nationally determined contributions (NDCs), requested the international community to include a mountain agenda in the climate negotiation process, and informed financial facility on loss and damage as her bottom line during COP27 in Sharm el-Sheikh, Egypt. In addition to core negotiations in different agenda items, several activities such as leaders' summit, roundtables, country statements, and side events happened at COP27. Media communicated the state of negotiation, and 'climate activists' put additional pressure on negotiators for desired outcomes.

One hundred and twelve world leaders participated in the Sharm el-Sheikh 'Climate Implementation Summit', also called the African COP, adaptation COP, solution COP or the development COP, on 7-8 November 2022. Realising the outcomes of the scientific reports, the gravity of the climate challenge, a climate emergency and the increasing risks and adverse impacts of climate change on the planet, people and livelihoods, Heads of State and Government showed strong political will to translate climate commitments into actions. Ministers-led roundtables were organised on 7 and 8 November to discuss, generate political will, and agree on strategies for priority areas such as just transitions, innovative finance for climate and development, food security, energy, water security and climate change &sustainability of vulnerable communities. Roundtables focussed on finance, technology transfer, and capacity building to implement the climate commitments. This political will provides guidance to the negotiators to make it an 'implementation COP'.

Parties to the CMA4 agreed to 'matters relating to a funding arrangement for addressing loss and damage' as a sub-agenda under the finance agenda item. The COP27 President, Egyptian Foreign MinisterMr. Sameh Shoukry informed in the opening plenary that “The outcomes of this agenda item are based on cooperation and facilitation, and do not involve liability or compensation,” and “It will launch a process with a view to adopting a conclusive decision no later than 2024.” A few decisions that will remember African COP are summarised below:

In the early morning and closing plenary (20 November), the COP27 President said 'I invite the CMA to adopt a draft decision on funding arrangements for responding to loss and damage. I hear no objections. It is so decided'. Parties to the COP27 and CMA4 decided to 'establish new funding arrangements, a fund for responding to loss and damage, and a Transitional Committee' to operationalise the new funding arrangement. Of 23 members of the Transitional Committee, three and two members will represent from Asia-Pacific region and LDCs respectively. This pledge-based fund is expected not to be an 'empty bank account'. Parties to the CMA also decided to initiate the development of a framework for the global goal of adaptation' with two functions, - enhance action & support, and review progress in achieving the global goal of adaptation. The framework 'will be informed by a structured approach to the Glasgow-Sharm el-Sheikh work programme in 2023' and the structured approach may take into consideration, inter alia, the terrestrial and freshwater ecosystems, comprehensive water resources management, mountain regions, biodiversity, community-based adaptation, nature-based solutions etc.

Parties to the COP27 requested the Adaptation Committee and LDC Expert Group to 'continue to identify the priority gaps and needs of developing countries related to the process to formulate and implement national adaptation plans. Parties to the CMP provided guidance on clean development mechanism (CDM) to matters relating to the 'transfer of eligible certified emission reduction (CERs)' and invited the CMP to 'request the Supervisory Body to cooperate with the Executive Board on implementing the process of transferring eligible CERs to the mechanism registry'.

Based on initial registration to attend the COP27, Nepal has included over 75 persons in the government delegation, including experts and representatives from different projects and non-governmental organisations. Four secretaries, over half a dozen of joint-secretaries and other officials, experts and a significant number of NGO representatives participated this COP 27. 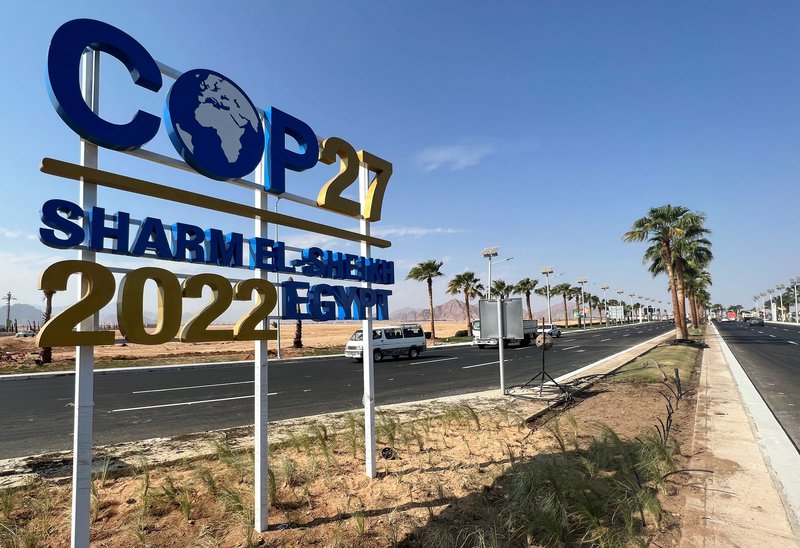 Nepal's participation in this African COP can be grouped into those: (i) attending the negotiation meetings; (ii) sharing experiences and learning in the side events; (iii) participating in the bilateral meetings; and (iv) engaging in putting pressure (activists) for desired outcomes. Because of the significant number of government delegations, delegates should have followed the negotiating meetings (formal and informal) of the agenda items related to adaptation, mitigation, technology, capacity building, finance, and carbon trade. Most of the delegates may have attended 'loss and damage' meetings in view of Nepal's continuous effort and interest in raising this issue since 2012 and being a 'hot cake' in this COP. Furthermore, Nepal issued a national framework on climate change-induced loss and damage in October 2021.

Although members of the Nepal Delegation shared experiences, learning, concerns and impacts of climate change through different side-events such as on water, women, mountains, NDC implementation plan, and most importantly adaptation, presenters forgot to reiterate her 'adaptation brand - the LAPA' (Local Adaptation Plan for Action) which gathered a high level of interest in developing and developed countries since November 2011. Furthermore, Nepal should continuously highlight its policy commitment of mobilising at least 80 per cent of the total budget for programme implementation at the local level by reducing administrative expenses. This policy provision in 2011 encouraged LDCs to commit 'to develop strong climate finance architecture, with at least 70 per cent of flows supporting local level actions by 2030' as clearly reflected in 'LDC 2050 vision: towards a climate-resilient future.

Nepal may wish to benefit from existing decisions. Nepal may initiate a process to transfer the certified emissions reductions (CERs) as registered through the CDM (Clean Development Mechanism) project under Kyoto Protocol to the new arrangement under the Paris Agreement. CDM projects on water mills, improved cooking stoves and biogas should provide financial benefits as envisaged during its development and government approval. Similarly, Nepal may wish to develop adaptation projects to access financial resources, including readiness projects, from existing funding mechanisms. In view of the existing adverse impacts of climate change, including on water resources, it is high time to expedite the 'pending' proposals and develop new ones to access additional funding. Participation of a good number of high-level government officials in the water resources sector at COP 27 is expected to promote developing water sector climate adaptation projects, access international funding and make climate-resilient sustainable utilisation and management of water resources. This will hopefully reduce the use of and subsidies for fossil fuels, increase investments in clean energy and reduce taxes on electric appliances, including transportation facilities.

Since the last three decades, delegates have highlighted finance facilities or separate funding arrangements for adaptation, GHGs emission reductions or loss and damage, but they are all pledge-based or seem 'token pledges' which do not meet the minimum funding requirements to adapt to climate change impacts. Promoting climate resilience development is a 'far destination'. Parties have also urged all contributors to fulfil their pledges. The time has come to make efforts for continuous replenishment of the existing funds.

China’s Rapid Transformation And Lessons To Learn By Krishna Silwal 12 hours, 41 minutes ago

Youths In Nepal Elections: From Social Media To National Platform By Sangya Dhakal 2 days, 11 hours ago

An Overture Filled with Confusion By Dr. K. Uprety 4 days, 16 hours ago