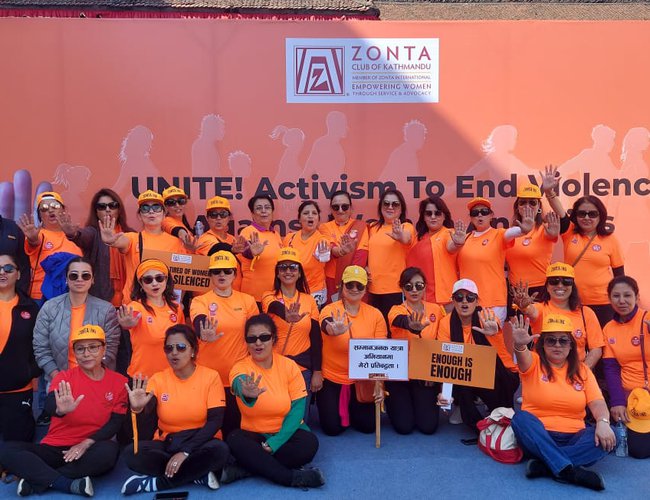 The Zonta Club of Kathmandu organized a walkathon to promote activism to end violence against women and girls. The walkathon started from Durbar Marg with more than 500 participants walking towards Basantapur Durbar Square, and concluded with a street play with powerful messages against gender-based violence.

The walkathon coincided with the United Nations’ 16 Days of Activism against Gender-Based Violence from 25 November-10 December 2021. This year, the UN marks the 16 Days under the theme “UNiTE! Activism to end violence against women and girls”.

President of Zonta Club of Kathmandu Ava Shah said, “the 16-day activism gives us a platform to unite and raise our voices against gender-based violence. Women from all walks of life continue to make up the bulk of victims of abuse. Through this walkathon and other events over the next 16 days, we hope to put the spotlight back on creating action and supporting survivors of domestic violence, uniting activists working to end gender-based violence and creating solidarity for the women’s rights movement,”

Governor of Zonta International, District 25 Shreejana Ranasaid, “Gender-based violence is a serious human rights violation that affects women’s well-being and her ability to lead a productive life. It also impacts their families and has tremendous cost implications, including loss of productivity and opportunities to earn livelihoods. Every woman has the right to live free from violence. Through this walkathon, the Zonta Club called on influencers, activists, the media and the youth to amplify their voices against gender-based violence.”

Zonta has produced four short films that are being played at QFX cinemas over the 16-day campaign period. “These short films deliver the vital message that violence/harassment and child marriages are never okay - not one time, NOT EVER and one must speak up,” saidVidushi Rana, chair of 16-days campaign on violence against women of Zonta Club of Kathmandu. “The videos, we hope, will encourage victims to seek help and let them know of the helpline options where they can safely call and speak up.”

As part of the initiative, Zonta will also stage a series of street plays and organize discussions in schools and public places in Kathmandu and surrounding areas. In the lead up to the walkathon, Zonta also rallied influencers to advocate against gender-based violence and create awareness on the importance of speaking up. These clips are being widely circulated in the social media.

Zonta International is a leading global organization of professionals, empowering women worldwide through service and advocacy.

Under the umbrella of Zonta International, the Zonta Club Kathmandu was established in 2012. It is a registered NGO in Kathmandu and has been working on the advancement of the status of women with the objective to improve the economy, education, health, and issues related to youth and violence against women at the local and national levels through service and advocacy.