The glider story can also be discarded though it was not an impossible endeavor it still remains untried. The second one also sounded like hearsay as there was no solid evidence earlier. 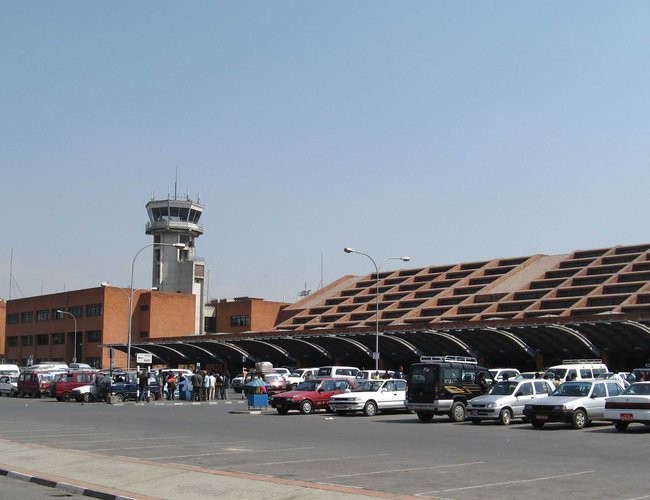 Nepal aviation authorities have consistently listed three events, between 1947-50, as having important bearings related to the first-ever aircraft landing in Nepal. The first one related to 1947 states, “a lone pilot landed his ‘glider’ on the old golf course...”. The second one of 1949 is assumed to have “heralded the formal beginning of aviation in Nepal with the landing of a four-seater Beach-craft Bonanza. The last one talks about a charter flight from Gauchar to Calcutta (1950), but it, obviously, has lesser significance.

Keith DeFolo, in his article Jet Road to Kathmandu (TRN/16Jan’69), writes of the 1947 landing: “The pilot spluttered over the mountains, dipped into Kathmandu Valley, circled the Tundikhel and gently glided to a halt on the old golf course...”.devoid of solid facts, it reads more like a fiction. He was possibly involved with US aided runway extension project and might have picked up party gossip and turned it into an article. The Gaucher strip was where Madan Sumsher had his golf course.

The glider story can also be discarded though it was not an impossible endeavor it still remains untried. The second one also sounded like hearsay as there was no solid evidence earlier. But it is not so any longer, we have proof of the said event now. So much so, the pilot who landed there still lives on. The landing of Beach-craft Bonanza had happened at the behest of the then-Indian ambassador. The plane landed after being prodded by then prime minister Mohan Sumsher.

Journalist Santosh Khaderi has come up with an interesting write up “काठमाडौँमापहिलोपटकविमानअवतरणकोकथा” based on the primary source (Issue#3, May/June 2010 / Vayu Aerospace and Defence Review)along the with more interesting instances related to Nepal aviation in https://himalpress.com/news/882. But Vayu Aerospace was kind enough to provide a mailed document of that particular article. As it was a part of the early editions, they did not have that piece in proper link format. 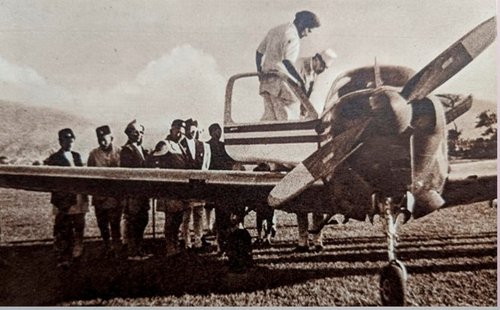 (The picture shows King Tribhuvan examining the aircraft. Standing next to him is Pilot Dalip Singh Majithiawho flew in from Muzaffarpur.)

There must be many interesting aviation-related incidents that are yet to come to light but those are getting increasingly scarce. It is at this juncture one remembers Biranchi Man Pradhan, who was possibly the first airport manager of Gauchar airport with a wealth of information and is immensely missed for that reason. 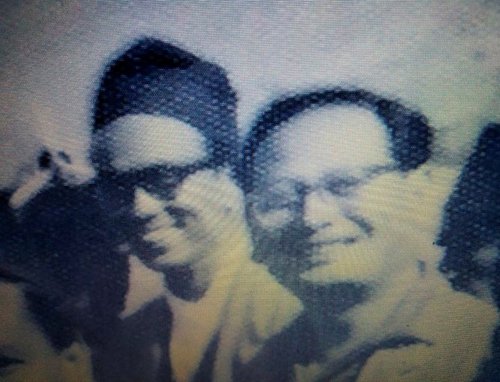 Biranchi Man Pradhan and then Secretary of Transport Ministry Er. Jyan B Pradhan

This scribe remembers one particular incident that relates to the then crown prince of Japan who was on Nepal visit, with his wife, soon after their marriage (April 1959). They were taken on the mountain flight one morning in a Dakota. But the aircraft had to be turned back midway when princess Michiko started feeling uncomfortable, as Pradhan narrated at the airport the same morning, I recollect. As we know, Akihito abdicated in 2018 after being the Emperor in 1989.

Until recently the accident at Simra (Aug 30, 1955) was believed to be the first air accident in Nepal. The Dakota (VT-AZX)operated by Kalinga Airlines was forced to make a premature lift-off to save a person walking across the runway and that led to stalling and resulted in the death of two out of the three crews onboard. But there had been an accident, nine years prior to 1955, as told by Colin Cummings in his book Final Landing. The Royal Air Force DC-3 (Reg. KG521) overran the runway at Simra, on landing and fell off a 14ft drop on May 7, 1946. The authenticity of this information is confirmed by Ronan Hubert, a historian of aircraft accidents, of the Geneva-based Aircraft Crashes Records Office (ACRO). It also finds a mention in James J. Halley’s Broken Wings: Post-War RAF Accidents. Moreover, the Aviation Safety Network (ASN) also enlists it as the first accident in Nepal.

We are more interested in the date than the event. The landing of RAF aircraft at Simra was baffling enough. How come we had an operational strip when the country had no aircraft? It will be equally difficult, if not impossible, to find someone who can corroborate this. It is very unlikely that some leftover pieces of the bulky engine will still be rusting in the vicinity, so long after.

We have not reached the end yet, there is another story of an even earlier date incident. An article penned by PrakritiAdhikari(Gorkhapatra / Baisakh 7, 2076)relates to a crash of 16 Dec 1944 based exclusively on someone called Gokul P Sharma of Siraha. He was a former employee of Nepal RastraBank and seemed to have a vivid memory of the incident. An effort to get Himalkhabarpatrika and even the Centre for Investigative Journalism (CIJ)to arouse their interest to dig more, sadly bore no fruit. It was vital to get the most out of him because of his advanced age and related ailments. I even tried records of the Royal Indian Air Force but could not find an incident around the stated date that was convincing close enough.

As for now, May 7, 1946, marks Nepal’s entry into the aviation age and it seems to have begun with a “bang” that, thankfully, had no fatalities among the sixteen onboard. Anchored firmly on RAF records, it is not hearsay by any means. But for this to be recognized as such, people in the driving seat in the aviation authority should be able to make a distinction between “record-based facts” and mere “hearsay”.

Arjyal is an avid aviation enthusiast. He can be reached at harjyal@yahoo.com